Warner Bros. Interactive Entertainment is marching out an army of brands for its Lego Dimensions toy-game hybrid product that debuts this fall.

The game division of Warner Bros. is announcing today that its Lego Dimensions will feature characters from DC Comics, The Lego Movie, The Lord of the Rings, The Wizard of Oz, The Simpsons, Doctor Who, Ghostbusters, Portal, Jurassic World, Midway Arcade, Lego Chima, and Scooby-Doo. This giant army of characters is what Warner is bringing to the fight in the “toys to life” category of video games and physical toys, a $4 billion category (revenues to date) that Activision kickstarted with the launch of Skylanders in 2011. Now the battle includes Nintendo’s Amiibo, Rovio’s Angry Birds, and Disney’s Infinity platforms as well.

David Haddad, the head of Warner Bros. Interactive Entertainment, said at our GamesBeat Summit that the investment in Lego Dimensions is the biggest bet in gaming that his company has ever made. It’s gambits like this that explain why Warner Bros. was the No. 1 publisher in the U.S. in January through April of the year — a first in the company’s history. At first glance, it may not seem like a big deal, as just one more entry in the “toys to life” category. But the enormity of Lego Dimensions is pretty breathtaking, and it’s no wonder that the companies have worked on the idea for more than eight years. 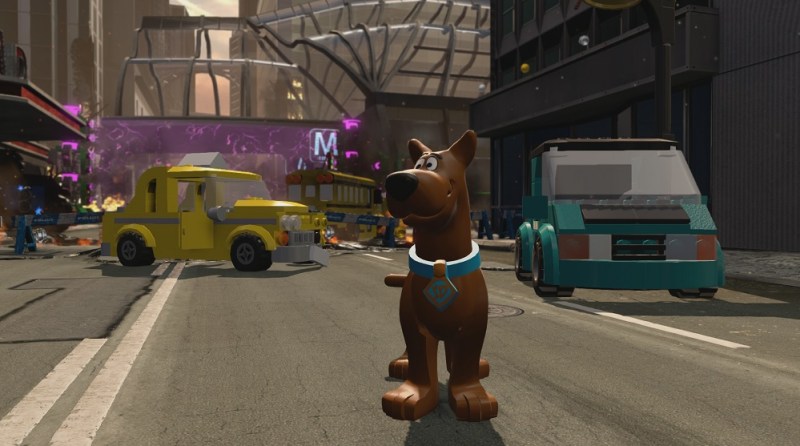 Above: Scooby-Doo in Metropolis in Lego Dimensions.

Warner, Lego, and TT Games want you to know they’re not just making a Skylanders or Disney Infinity copycat. Never before has a developer combined so many different toy, movie, cartoon, and comics brands in a single video game product that allows kids (and adults, of course) to mix-and-match them. Jon Burton (the creative director of TT Games, the Warner Bros. game studio that creates the Lego games) said in a presentation that the idea has been germinating ever since Warner bought his company in 2007.

I imagine that getting over the legal hurdles took a whole lot of that time. But Burton said that there were plenty of hurdles to overcome in bringing the whole project together.

“We had to step forward on technology and gameplay,” Burton said.

He said there were numerous pillars to the game, only a couple of which he is talking about now. The first is the world-class licenses. 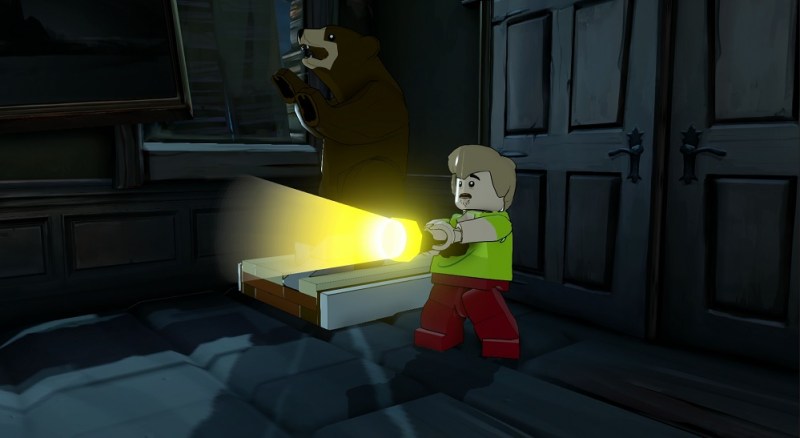 Above: Shaggy from Scooby-Doo! in Lego Dimensions.

“This hasn’t been done on this scale on any medium before,” Burton said. “You can play with all of the licenses in the starter kit alone. You’ll jump across worlds, all in the core experience. It’s a true mashup.”

Lego Dimensions will have its own compelling story, Burton said, but it will also have freeplay modes that allow you to mess around in any areas you want. The story is about how universes are colliding, causing characters from one world to meet those from another. That premise gives the companies the excuse to create the biggest mash-up in history.

This project combines the video game skills of TT Games, the toy-making abilities of Lego, and the brands of Warner. As with the other platforms, you can put a toy on a portal (dubbed the Gateway) to transport a character into a video game.

But in this case, you can design the Gateway any way you wish using hundreds of Lego bricks. And every Lego vehicle and gadget and be physically built and rebuilt into different items for the game. You can put as many as seven characters and vehicles onto the pad for the Gateway at any given time, which means that is how many characters/vehicles can be in the game at once. The result is a huge amount of gameplay and replayability.

Consumers will buy a starter pack that includes the portal and some characters as well as the video game. Lego Dimensions will launch on Sept. 27 for the Xbox One, the Xbox 360, the PlayStation 4, the PS3, and the Wii U. 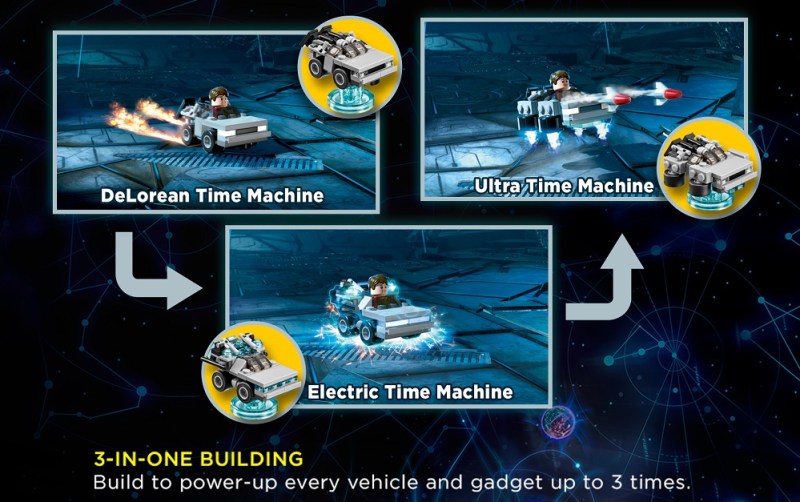 Above: You can build different three versions of Back to the Future’s DeLorean vehicles from one set of Lego Dimensions bricks.

Warner revealed today in a new trailer that every Lego vehicle and gadget can be physically built and then rebuilt twice for a total of three different objects that do entirely different things in the digital game. Once players earn a building achievement, they will get in-game instructions that show them how to use the same physical Lego bricks to rebuild vehicles and gadgets into different objects that provide all-new abilities. I flipped through the digital blueprints, and they’re about as helpful as paper blueprints. So yes, you’re going to have to be a bit of a Lego genius to put some of these toys together. For kids, I don’t think this will be a problem.

It’s the adults I worry about.

“You may take a car and rebuild it into a plane,” Burton said. “The genius of Lego is every model uses every piece.

The Lego vehicle bricks that come in the Starter Pack can build the Lego Batmobile into the Lego Batblaster, which adds Sonar Smash, a sonar gun that has the capability to break Lego sonar bricks. The vehicle can then be rebuilt again as the Lego Sonic Batray. That adds a special attack in the form of a missile barrage. Players can fuse an upgraded vehicle to the Lego Toy Tag, enabling them to take it and any new abilities with them to a friend’s game or wherever they’d like to play. Players can do this with every vehicle and every gadget from every pack. 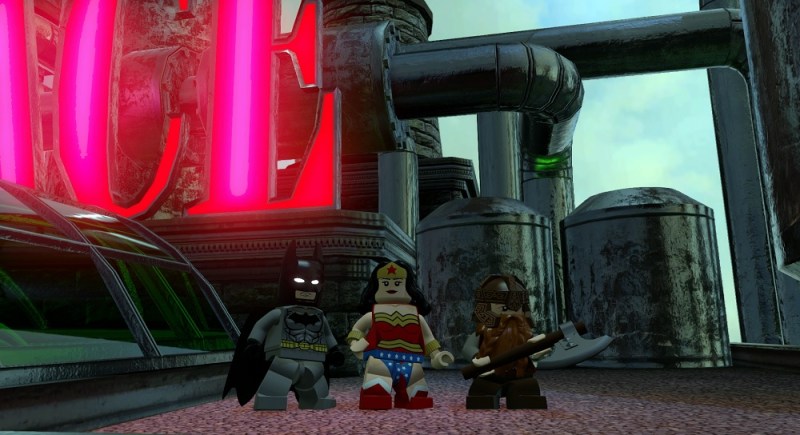 Above: Batman, Wonder Woman, and Gimli in Lego Dimensions.

Those are some pretty cool tricks. But the game won’t fly if it isn’t fun. I got a hands-on preview of the game and interviewed some of the creators. And I felt that the creators nailed it again in adding some of the classic humor into the games.

From the very start, it’s goofy. Batman, Wildstar, and Gandalf the Grey came flying through the Gateway from another dimension. They land in Oz. Batman brushes himself off and says, in a reference to Dorothy’s line, “We are not in Gotham any more.” He says with disgust about Oz, “It’s so … colorful.”

Batman the starts confronting Dorothy and her singing companions, since one of them is a Scarecrow, a good guy in the land of Oz but a villain in Batman’s universe. After clearing up the confusion, they proceed down the Yellow Brick Road.

As the gameplay begins, You could play any one of the characters, and switching was simply a matter of running into another character and hitting a button, much like in the Lego games of years past. There’s a wagon blocking the way, but as Batman, you can find a way to assemble a hook, attach it to the wagon, and then pull the wagon over with your grappling hook. It’s a mundane puzzle, but one that can stump you if you haven’t played a lot of Lego games before. Batman then gets into his Batmobile. You can use it to drive through obstacles in your way, or you can just drive into the field and mow down all of the poppies. If you touch the flowers, you fall asleep.

Gandalf says their journey has been remarkably easy, and Batman says, “You just had to jinx it, didn’t you?”

Then the Wicked Witch of the East shows up with her flying monkeys. The three heroes battle the monkeys and grab something that looks important (a “keystone brick”). You have to fight the winged simians in a contained space. But the witch gets it brick, and she flies off, leaving the heroes stranded.

“The highlight is that we get to create an original storyline with characters that have never been together before,” said Mark Warburton, the associate producer at TT Games, in a presentation. “We try to stay true to the storyline of whatever film or property is the primary one.”

But if you wanted to play this level with Scooby-Doo instead, you could do it. You could make Scooby drive the DeLorean from Back to the Future along the Yellow Brick Road, Warburton said.

Above: The Batblaster in Lego Dimensions.

During the battle with the Wicked Witch of the East, the Gateway starts glowing red. That’s because the witch has cast a spell and immobilized one of the characters. You can break the magic by lifting the toy from the glowing spot on the Gateway and moving it to another spot. In that way, the Gateway itself comes into the gameplay.

“This is an example of the kind of interaction that is possible with the toy pad,” Warburton said. “It’s a simple example of 1-to-1 interactivity between the video game and the physical world. We’re going to tell you a lot more about that later.”

In the next part of the demo, you go through a Gateway and return to your home base, which is the planet Vortech, the home of Lord Vortech, the primary antagonist. You can put Batman and the Batmobile on the toy pad. Then you get instructions on how to rebuild the Batmobile into a Batblaster. With the Batblaster, you can use it to dismantle a wall in the home base, getting access to a power generator. That generator re-powers the Gateway, and leads you to your next mission.

In that mission, you had to find some keys in a garden and find your way into a haunted mansion. Yes, it was part of a Scooby-Doo level, and Scooby plays a big part in it. 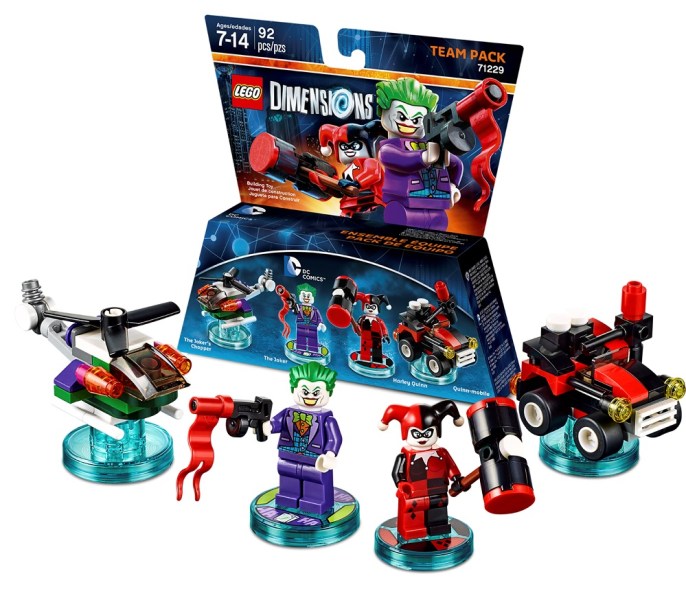 The Lego Dimensions game looks like it’s in good hands with TT Games, which has been making fun and hilarious Lego games for a decade. With the advent of Activision’s Skylanders in 2011, parents have cynically learned to hate spending so much money every year on the endlessly collectible toys and video games. But when you see something magical happen between a toy and a video game, it makes ordinary toys seem so inert.

With Lego Dimensions, it looks like Warner Bros., TT Games, and Lego have created another way to part parents from their money. In fact, the parents may be the ones fighting for the controller with their kids.