At its Accelerate 2019 event in Orlando today, Lenovo previewed “the world’s first foldable PC.” The new product doesn’t have a name, price tag, or ship date. We do know, however, that the foldable PC will be part of Lenovo’s flagship ThinkPad X1 line and that it will arrive in 2020.

Foldable PCs already exist — they’re called laptops. Lenovo is of course describing a PC where the screen itself can be folded, similar to Samsung’s Galaxy Fold and Huawei’s Mate X smartphones.

Lenovo backs up its “world’s first foldable PC” claim by saying it looked at laptops sold by major PC manufacturers this month. None shipped more than “1 million units worldwide annually” with foldable screens. Apparently Lenovo is hoping to ship at least 1 million units of its new foldable PC in the first year.

Lenovo is either first or second in global PC shipments, depending on who you ask. The company certainly has the ability to deliver on that number, if the demand is there. “In terms of global availability, we’re going to follow the same launch capabilities that we have on the X1 line,” Tom Butler, Lenovo’s ThinkPad marketing director, told VentureBeat.

We don’t know much about the device yet, and that’s on purpose. But Butler did say that the company has been working on it for “several years” with partners Intel, Microsoft, and LG. He confirmed that those three have been part of the project from the very beginning. Intel chips and Windows will be powering the foldable ThinkPad.

“It’s going to be running a future Intel-based platform that we’re not going to disclose at this time,” Butler said. “Think about a screen that can fold and can have multiple windows and experiences. We’re working with Microsoft to optimize for that type of experience.” 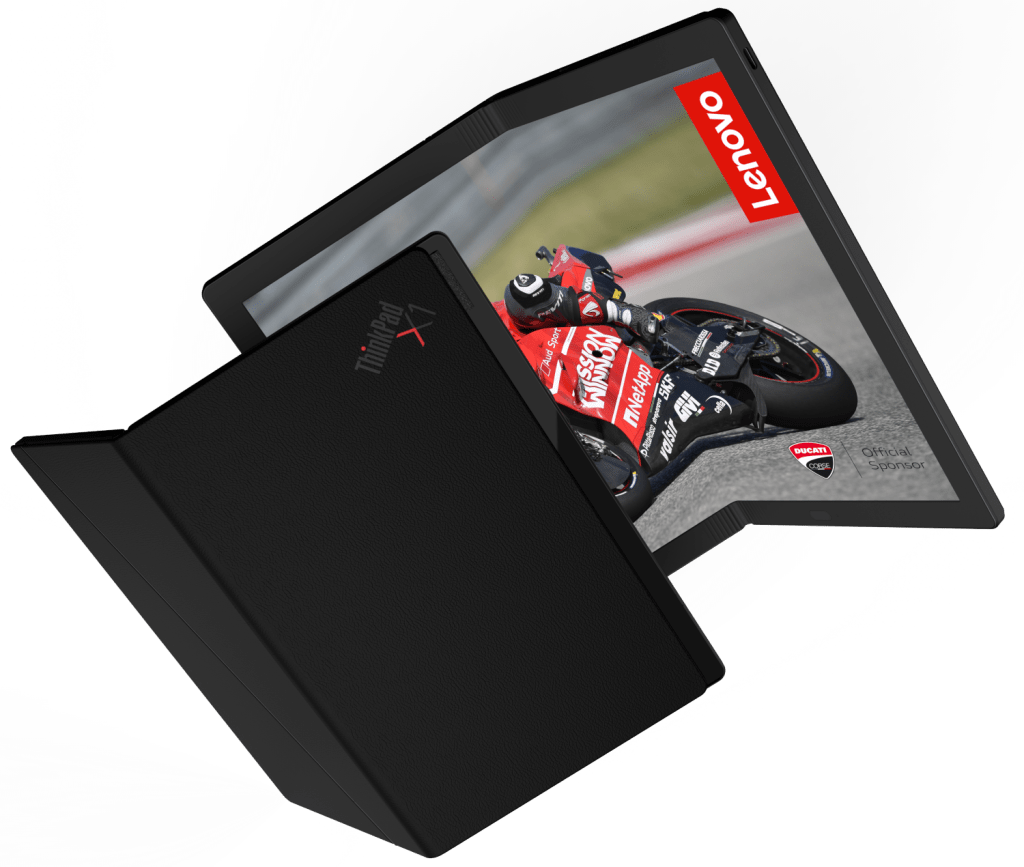 LG is responsible for manufacturing the screen, the highlight of the device. It’s a 13.3-inch single OLED 2K display with a 4:3 aspect ratio. It’s also a touchscreen and will support pen input. When folded in half, the width of the device is reduced by 50%, as you might expect.

“We’re really calling it not an evolution in mobility, but a revolution in mobility,” Butler explained. “If you think about a PC, we’re constantly challenging ourselves in driving to thinner, lighter, smaller form factors. And you see incremental improvements every year, every generation. This device really leapfrogs across [that] because I’m going to take a full-size notebook and fold it in half. So you get that instant jump in portability with the device.”

Made for highly mobile, tech-savvy professionals who demand the best tools, the new foldable PC joins the premium ThinkPad X1 family, promising that the unprecedented portability will in no way compromise productivity and reliability. This is not a phone, tablet, or familiar hybrid; this is a full-fledged laptop with a foldable screen.

Interestingly, Lenovo doesn’t describe the device as a smartphone replacement. It’s very much a laptop.

“We see it and are positioning it as a laptop replacement,” Butler confirmed. “In fact, we’re going to argue that you will use this and carry this with you more than you would your laptop. This device, we believe, you’ll not only be productive with, but it’s going to open up new use cases for you.”

The Chinese company envisions the foldable PC staying by your side all day:

Remember: Lenovo expects to find 1 million people in those groups.