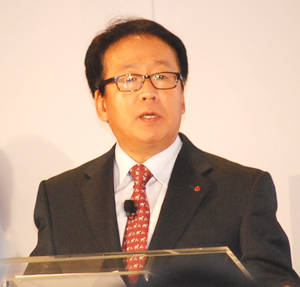 South Korean electronics maker LG showed off some cool new gadgets today, including a Google TV-powered HDTV, a high-powered Verizon Android LTE phone and a connected refrigerator that can order your groceries. Company executives debuted the products live at a press conference at CES 2012 in Las Vegas.

The first big item LG showed off is its LG Smart TV with integrated Google TV. Normally, Google TV is an external accessory. The company did not mention pricing or availability, but we expect the TV to appear in the first few months of this year for a pretty penny.

The company will also be heavily investing in non-Google TV-powered TVs as well and has a smattering of new 3D TVs on the way, including a monster 84-inch model. New premium 3D TVs will feature LG’s proprietary L9 chipset, which has a quad-core CPU and enhanced 3D picture quality. These next-gen 3D TVs will have immersive cinema 3D, with 2D to 3D conversion, 3D sound zooming and 3D depth control.

Wanye Park, LG President and CEO, said 3D TVs continue to do well, and in the past year LG has increased its overall market share in LCD and LED-based TVS. “Despite a challenging 2011, life is still good at LG,” Park said.

On the mobile front, LG showed off its new Spectrum Android superphone for Verizon Wireless. It will feature a 1.5GHz dual-core processor, a 4.5-inch display, and 4G LTE. The device will be available on Jan. 19 for $199 with a two-year contract with Verizon. In many ways, this is LG’s successor to its Revolution smartphone.

LG noted that it owns 23% of key patents in LTE technology, worth an estimated $7.9 billion.

On a final note, the company showed off new smart appliances, including a refrigerator that can help you do a lot with your food. The new smart fridge has LG”s “Smart Manager,” with a food manager system, voice recognition, the ability to scan grocery lists, and the ability to order groceries from your fridge panel.

The company also talked about its new “blast chiller” technology, which can reduce the temperature of a can of soda or beer in five minutes.

You can check out a gallery of LG products from the press conference below: