Life360 founder Chris Hulls has faced his share of patent shakedowns before — at least three or four, by his count.

But when the latest patent holder, AGIS, sent his company a notice alleging that Life360 was infringing one of its patents, Hull had had enough.

Perhaps he was feeling a little extra brave — or confident — thanks to the $50 million in Series B funding that Life360 just closed. Regardless, he’s now facing a lawsuit from AGIS.

“I’ve never done that before,” Hulls told me about his less than cordial response. “Normally we just listen to the lawyers and the whole thing has a sense of decorum. But you’re always seething on the inside, because having a nice, cordial response is like legitimizing someone holding a gun to your head.”

The patent in question, U.S. patent 7031728, covers “a cellular PDA communication system for allowing a plurality of cellular phone users to monitor each others’ location and status,” by viewing symbols representing each person superimposed on a map. The patent also covers the ability to call other people by tapping on those map markers.

The company holding the patent, whose full name is Advanced Ground Information Systems, may not be a patent troll in the classic sense (a company that doesn’t actually use its patents). AGIS in fact has several products. It was started by Malcolm K. “Cap” Beyer, a former U.S. Marine, according to the lawsuit. AGIS has a system called LifeRing that allowed first responders and military personnel to coordinate with one another in the field through maps on PDA or cellphone screens. It integrates with military command-and-control systems and offers Android and iOS versions. (You can read the full complaint from AGIS, uploaded to Scribd by Pando Daily.) 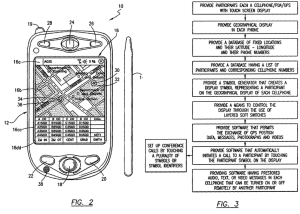 Above: Two diagrams from AGIS’s patent describe a way of showing people on a map and allowing them to call one another by clicking on symbols.

Hulls thinks this patent is uselessly vague, and has nothing to do with Life360’s own “Circles” feature, which shows members of a family (or group of friends) as faces on a map, allowing them to communicate with one another by sending group or individual messages.

“We’re getting sued for having markers on a map showing where people are, and allowing communication between them.”

“I could show them a Star Trek episode from the 1960s” that had a similar concept, Hulls said.

We are currently in the process of retaining counsel and investigating this matter. As a result, we will not be able to meet your Friday deadline. After reviewing this matter with our counsel, we will provide a prompt response.

I will pray tonight that karma is real, and that you are its worthy recipient.

Life360 has never gone to court before over a patent dispute; it has always settled. Economically, settling makes more sense, Hulls said, comparing the cases to the classic “Prisoner’s Dilemma” discussed in Econ 101 and Philosophy classes. Disputing a patent in court might be the right thing to do for society overall, but it could take millions of dollars in lawyers fees and distract a company for years — with no guaranteed success at the end of that process. By contrast, paying off the patent owner might cost a few tens of thousands of dollars, so it’s clearly in the company’s best interest to settle — but that only encourages further patent shakedowns from other patent trolls.

“What would actually be best for the ecosystem is if no one backed down, because then the patent trolls would go away,” Hulls said.

“Our last patent troll we settled for $10,000. If you think about that, it’s barely more than 10 hours of lawyer time.” Ten hours of a lawyer’s time would barely be enough to write a handful of letters, let alone mount an entire courtroom defense, so the economics are clear.

Life360 itself holds a couple patents, and several more patent applications are pending, although Hull hastens to add, as every executive in his position does, that these patents are “more for defense than anything else.” In other words, he says he just wants Life360 to have some patent ammunition to defend itself against future attacks like this.

“The whole thing is just a ridiculous cost of doing business, and as you grow, it becomes bigger and bigger. It’s like a tax,” Hulls said, noting that many other mobile companies face similar patent disputes, particularly as they enter their B and C rounds of funding. That’s partly because there were thousands of patents filed in the mid-2000s around a wide variety of mobile communications ideas.

Now, Hulls is toying with the idea not just of fighting AGIS, but doing research to invalidate the patent altogether. To do that, he’s thinking of creating an Indiegogo campaign that would crowdsource the funds needed to do the research into prior art (aka examples of the patented idea that existed well before the patent application) and invalidate AGIS’s patent.

“We could go on the offensive and say basically, ‘Fuck you, we’re going to invalidate your patent,'” Hulls said.

Maybe it’s the money talking. $50 million in capital does buy a lot of confidence. Still, Hulls feels that this might be the right thing to do, not just for his company but for the whole startup world.

“If there’s ever a time to stick up to one of these guys, now’s the time. I’m feeling a little braver than usual,” Hulls said.