2020 is the year Android could generate more app revenue than iOS, according to a report by mobile app marketer Liftoff.

Effective mobile advertising (which triggers app spending) is now essential, as in 2019 the platform beat out television for consumers’ attention, the report said.

About 74% of global mobile users use Google’s Android operating system, but they have long been outspent by iOS users, and spending on mobile ads has been bigger on Apple’s operating system.

Across all mobile ads, iOS costs are significantly higher, with prices between 2-7 times that of Android, even though Android users engage at similar rates, according to Redwood City, California-based Liftoff.

While the notion that iOS users spend more than their Android counterparts still holds some truth, the gap is quickly closing, said Liftoff CEO Mark Ellis in a statement. He added that as Android devices become increasingly advanced, marketers have an opportunity to take advantage of low acquisition costs while still reaching an engaged and extensive user base.

Video is where Android has the edge, combining attractive purchase engagement with bargain prices.

Interstitials, full-screen ads that appear during app transitions, are 3 times more expensive on iOS than Android. And video ads on Android are almost 55% cheaper than on iOS, but they deliver similar engagement rates, Liftoff said.

In line with last year’s report, video fell flat with the middle of the audience available for monetization, delivering the lowest ad engagement rate (15%) for the highest price ($21.27).

Surprisingly, the less sophisticated banner ad offers far more bang for your marketing buck, at nearly a third the price of video and 60% higher registration conversion — with a price to performance ratio still 120% higher than that of video.

But deeper in the funnel, video delivers: For mere pennies more, the medium drives nearly 60% higher purchase rates than banner.

Gamers are the prize when it comes to ad engagement 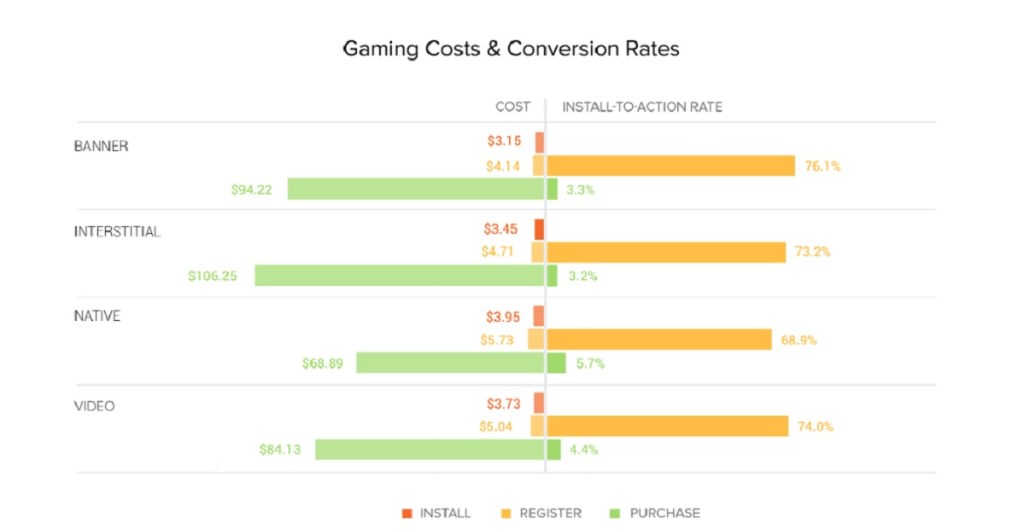 Above: The costs to advertise to gamers on mobile.

Across all ad formats, gamers are jumping to register — their average 73% registration rate is the highest of all app categories. These users also clock in at a mid-range purchase rate of 4.15%.

Marketers looking to appeal to gamers at the purchase stage should draw on native and video ads, which perform highest in this category. To earn the highest ROI, they should consider experimenting with native ads, which see the highest engagement (70%) at the lowest cost ($5.73).