Mobile users are embracing the subscription model, with considerable momentum gained from last year, according to the Mobile App Engagement Index produced by performance mobile user acquisition firm Liftoff and mobile engagement platform Leanplum. For years, users have been reluctant to do that, but times are changing.

The rise of direct-to-consumer brands like Dollar Shave Club and Stitch Fix and the continued dominance of Amazon Prime, Netflix, and Spotify have helped people acclimate to the idea of regular payments for a service. And seeing the value gained through this payment model in other areas of their lives has helped people increasingly engage with it in apps.

Year-over-year, acquisition costs for subscription-based apps have plummeted by nearly half, down to a comparatively low $86.99 from last year’s $162.22. While the cost to convert subscribing users is on the higher end, predictable cash flow is attractive. Plus, at 3.3 percent, engagement for subscription apps is rising, up 32 percent in the last year. That illustrates how these apps offer value that users are willing to pay for repeatedly.

“Acquiring users for this app category isn’t inexpensive by any means, but the year-over-year data showcases major momentum for subscriptions. Now pair that with Apple’s recent report that revenue from subscription-monetized apps is up 95 percent since 2017,” said Mark Ellis, CEO of Palo Alto, California-based Liftoff, in a statement. “And there’s no question that the long-term benefits of the subscription model, in the form of loyal users and stable cash flow, are worth the investment in service quality and marketing spend.” 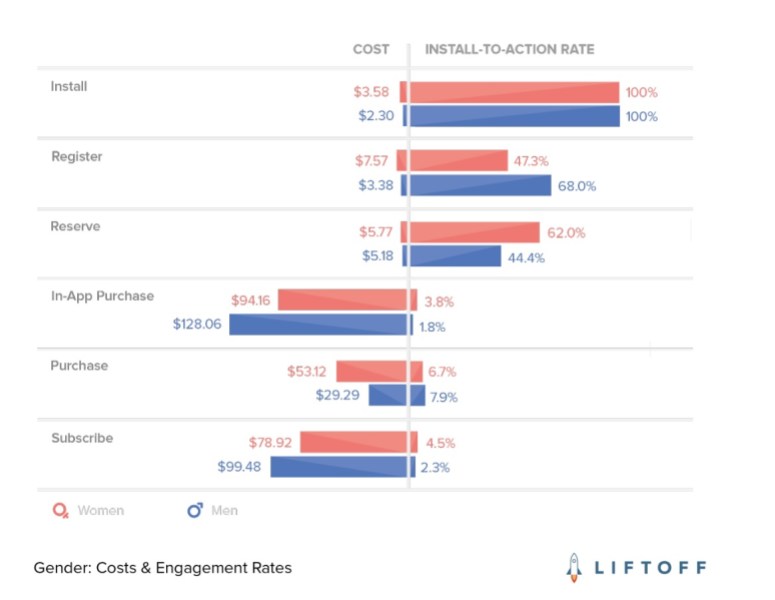 Above: Liftoff/Leanplum found women are more engaged with apps.

The index also highlights a shift in engagement with apps. In a significant departure from last year’s Mobile App Engagement Index, this year’s data reveals women to be the new premium user segment in the app economy at large, twice as likely to convert than men and more engaged overall.

Adding the ability to book a reservation in-app, for instance, lets marketers capitalize on female engagement. While acquisition costs for female users who reserve in-app show a 10 percent premium, they deliver on engagement: With an install-to-reservation conversion rate of 62 percent, women reserve in-app at a rate 40 percent higher than men. In-app purchases follow the same pattern, where women are still pricey at $94.16 but offer highly compelling engagement, with more than double the conversion rate of their male counterparts (3.8 to 1.8 percent).

As the data shifts in favor of female app users, marketers should take heed and execute campaigns with women in mind, with an emphasis on those dividend-paying, deep-funnel events of in-app purchases and reservation. But plan smart, as competition for the female demographic — across all app categories — is bound to get tough in the year ahead, the index said. 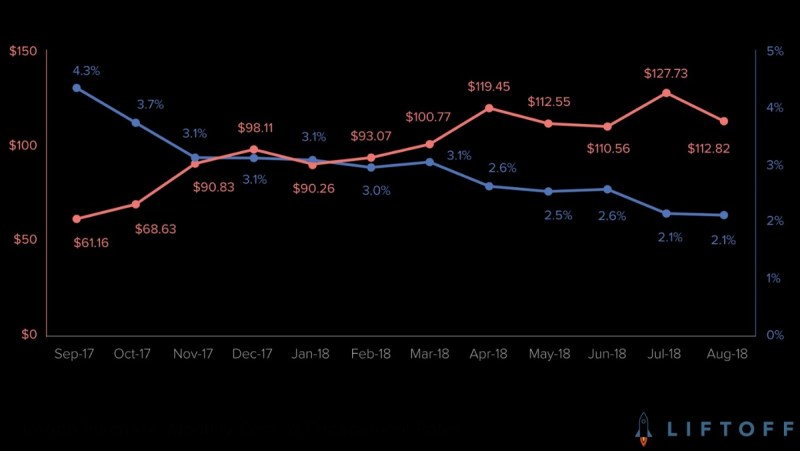 Above: In-app purchases are running into resistance.

And the report found that in-app actions are meeting resistance this year, signaling a change for monetization.

Across mobile app categories, acquisition costs dropped and engagement grew, with the data showing a sharp decline in costs and significant increases in conversion rates deep into the funnel compared to the 2017 Index Report. Still, there is one notable, unsettling exception: the cost to acquire a user that opens their wallet to make an in-app purchase, a key funnel event in mobile gaming. This cost rose to $101.58, up 56 percent in the last year, while in-app purchase rates dropped by nearly half to 2.9 percent.

With the massive influx of gaming apps this year, it’s likely that fevered competition for users attracted by the free-to-play (F2P) model is driving up acquisition costs at this engagement stage. But there’s hope, as some months do show promise for driving in-app purchases. A prime example is September, marked by the highest engagement rate (4.3 percent) at the lowest cost ($61.16), albeit less attractive than 2017’s best months.

The index is based on an internal analysis of over 257 billion ad impressions across 58.4 million app installs and 47.4 million post-install events spanning six major app categories (Dating, Finance, Gaming, Shopping, Travel and Utility) from September 1, 2017 to August 31, 2018.

“These days, to be successful on mobile, you need to understand that mobile user acquisition and retention go hand-in-hand,” said Joyce Solano, senior vice president of global marketing at Leanplum, in a statement. “The best way to protect your acquisition investment and retain customers throughout their life cycle is by forming a relationship — and that starts with contextual mobile messaging. In fact, our data shows this approach can increase retention by 62 percent.”

The takeaway? The app economy shows great promise as people are more comfortable spending on mobile. But massive growth also presents massive challenges for mobile app marketers — especially in verticals where competition is rife, such as gaming. Marketers looking to rise above the noise can sharpen segmentation, optimize targeting and focus on prime calendar months to appeal to an audience bordering on ad fatigue.