On Friday, the social network for professionals, LinkedIn, will go live with its newest feature: User photos.

Why did it take four years to add a feature already offered by every other social network? LinkedIn claims recent user requests for the feature drove the decision. However, Facebook’s swift rise as a place where business professionals also network has also shown how powerful picture-laden profiles can be.

Whether or not Facebook’s success drove the move, LinkedIn still keeps its distance from the Facebook interface in other ways. Only one picture will be allowed, at 80 by 80 pixels, and users will be able to block people outside their network from seeing it. They’ll have the option of blocking photos from other users, important for human resources departments seeking to avoid the appearance of discriminatory hiring practices.

Earlier this month, LinkedIn changed its “groups” feature to make them easier to create and manage — a move that also follows a strong rise at Facebook of its similar group feature. An open API for developer, such as Facebook has, is still in the works; company spokesmen said back in June that it would take about nine months.

The more considered pace of innovation at LinkedIn reflects the site’s conservatism. Before making any move, it carefully weighs the impact on the site’s professional feel. LinkedIn is expanding aggressively outside of the U.S. into countries where its it’s customary for job seekers to add a photo to the CV. So even adding photos can be said to be necessary for professional reasons, according to Kay Luo, LinkedIn’s director of corporate communications.

Its efforts overseas have also helped grow the site’s user base, which has grown strongly over the past two months, bringing total users to 14 million a month (Facebook has about 43 million). Between 230,000 and 250,000 new users join every week, the company reports.

When LinkedIn’s API does go live, one area it may encourage development is making life easier for mobile professionals: “We want to empower users to take their network anywhere they go,” said Luo, in response to questions about the site’s plans. 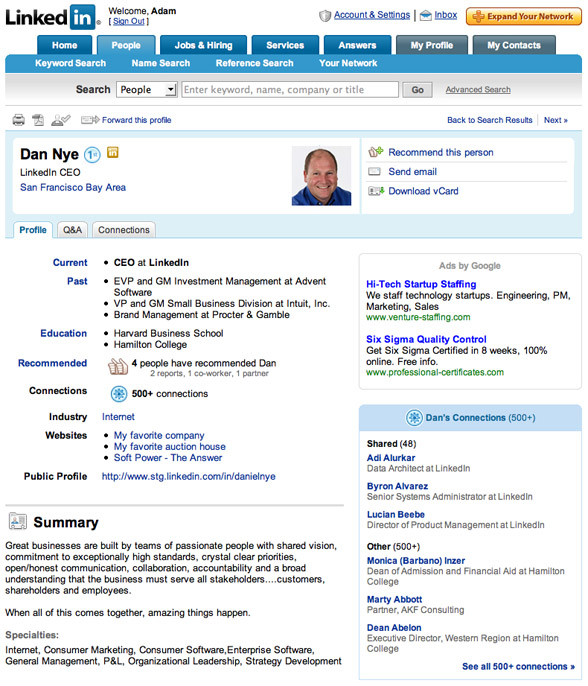