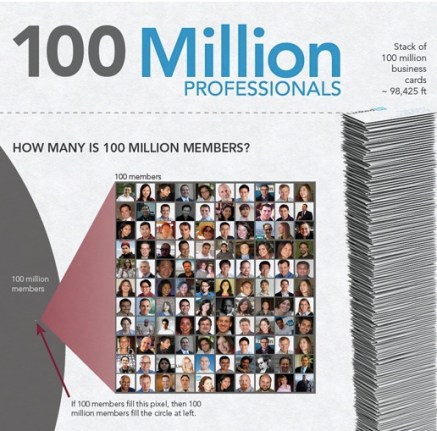 LinkedIn, the social network centered around professional networking, has announced this morning that it has crossed 100 million registered users, making it the fourth American social network to do so after MySpace, Facebook, and Twitter.

In a blog post about the announcement, CEO Jeff Weiner highlighted that the site is growing by a million new users every week, with its fastest markets being Brazil, Mexico, India, and France. To date, the service has 44 million users in the US and 56 million outside, with over 997,000 job listings for teachers alone. An infographic sums up the statistics.

While the milestone is a major one for any social network, as we pointed out back in January, it also presents a risk factor as the company moves toward an initial public offering. In the company’s own words: “the number of our registered members is higher than the number of actual members, and a substantial majority of our page views are generated by a minority of our members.”

The concern is one that has plagued LinkedIn since its early days — while many may have signed up to create an online resume of sorts, only a fraction continues to use the service even on an occasional basis. And for a company looking to make its dime out of connecting professionals, it’s no use if a majority of them are corpses in its database.

But the fact that the concern is one the company itself recognizes is a good sign; it shows that it is up for the challenge. Two weeks ago, the company launched LinkedIn Today, a social news service for different sectors of its users based on what they’re sharing using Signal, its version of the News Feed which lets users share links and content. Both products encourage user participation and give users more reasons to come back to the site.

The user concern aside, it’s worth noting that LinkedIn is in no problem financially: It reported impressive revenue figures of $120.1 million in 2009 and $161.4 million in 2010.