For all the talk about its benefit to the “economic graph,” one of the main things LinkedIn is recognized for is being an online resume — it’s a social network that most professionals understand how to take advantage of. But what about those who aren’t working yet, specifically college students who are about to graduate but have no idea what they want to do afterwards?

It’s a question that some of us face as we’re starting out: What job can I get with my major? LinkedIn saw this problem and has developed LinkedIn Students, an app that gives you a starting point for exploring the first stage of your professional career. Available now to users in the U.S., the app highlights companies and job titles that might be suitable, based on what school you attend and the area you’re majoring in. Students can also get started building their network, as LinkedIn Students lists any alumni that work at each recommended company. 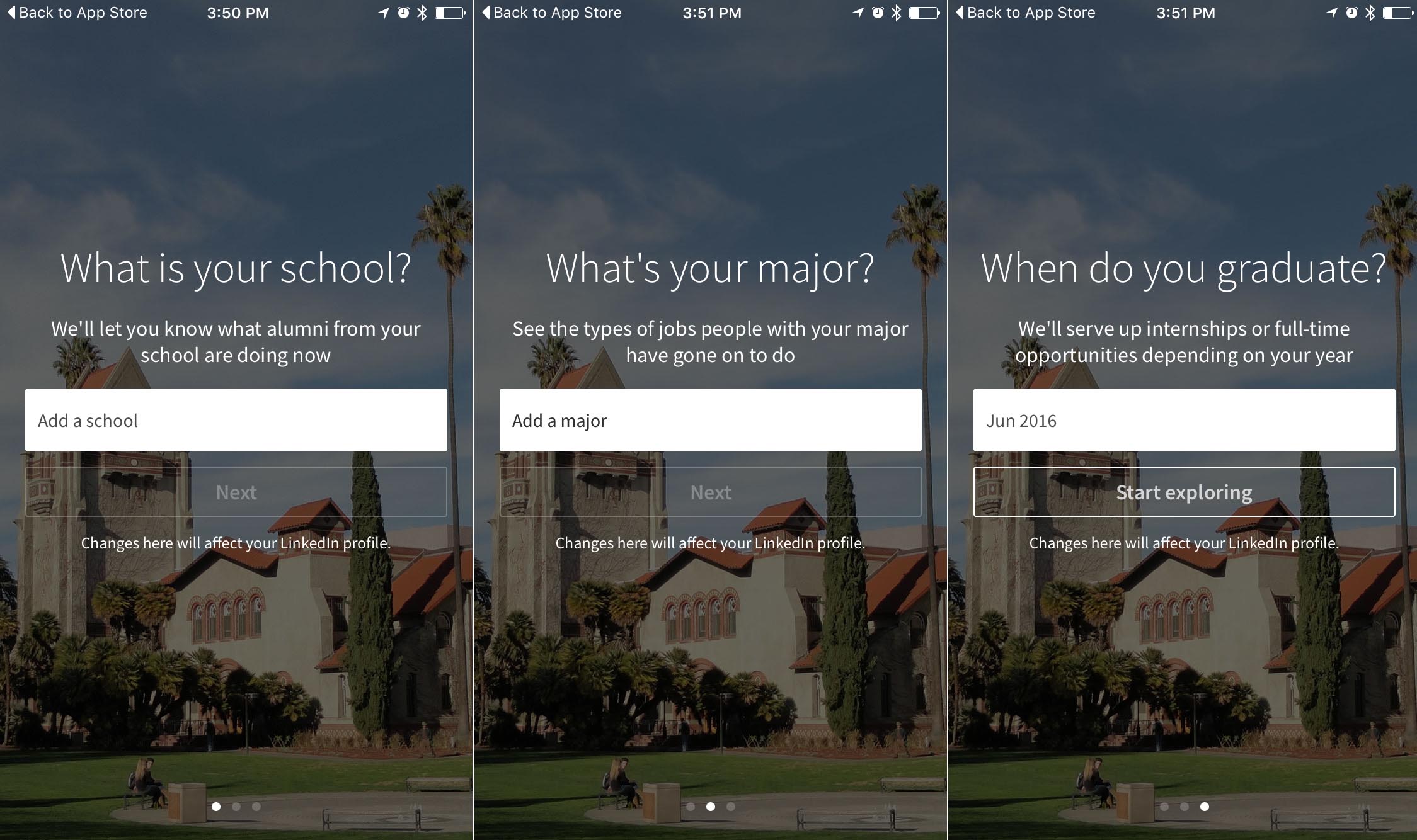 Above: Screenshots of the on-boarding process for the LinkedIn Students iOS app.

As a professional social network, LinkedIn’s usefulness is based on incorporating the data from your profile and personalizing your experience. But for those about to enter the workforce, such information is negligible. Joining LinkedIn can be pretty daunting, so the company has simplified the process for those at a much earlier stage in their professional lives, which also happens to be one of the fastest growing demographics on the site — LinkedIn told VentureBeat that there are 40 million students on the social network.

Students complete the authentication process using their existing LinkedIn account or by entering their name, university, major, and anticipated graduation date. From there, LinkedIn Students provides tailored job-related recommendations. Instead of asking you to navigate multiple tabs, the app displays the information in a card-like format that requires you to swipe (à la ‎Tinder) through a series of options. 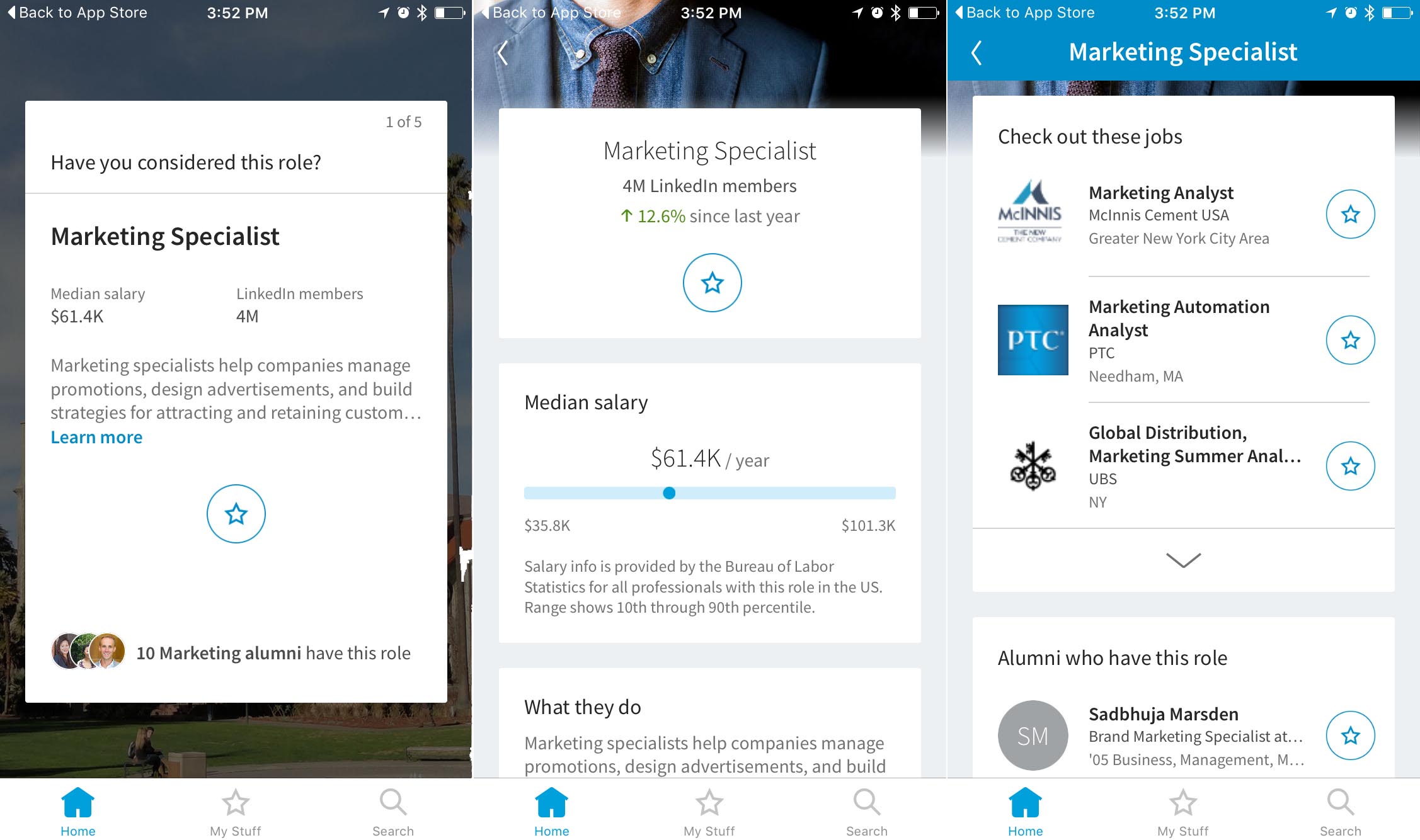 The first card displays roles you might be interested in. If you’re a psychology major but don’t want to be a psychologist, you’ll find alternate jobs that someone with a psychology degree could be suitable for, such as corporate trainer. Tapping on the card will bring up more details about the profession, including salary range, growth rate, a description of the role, jobs that are available, and alumni from the university who have gone this route.

Additionally, the program lists out companies that are hiring for the role, skills needed, and similar roles you might be interested in. All of the data that is provided comes from information that LinkedIn has drawn from its 414 million members. 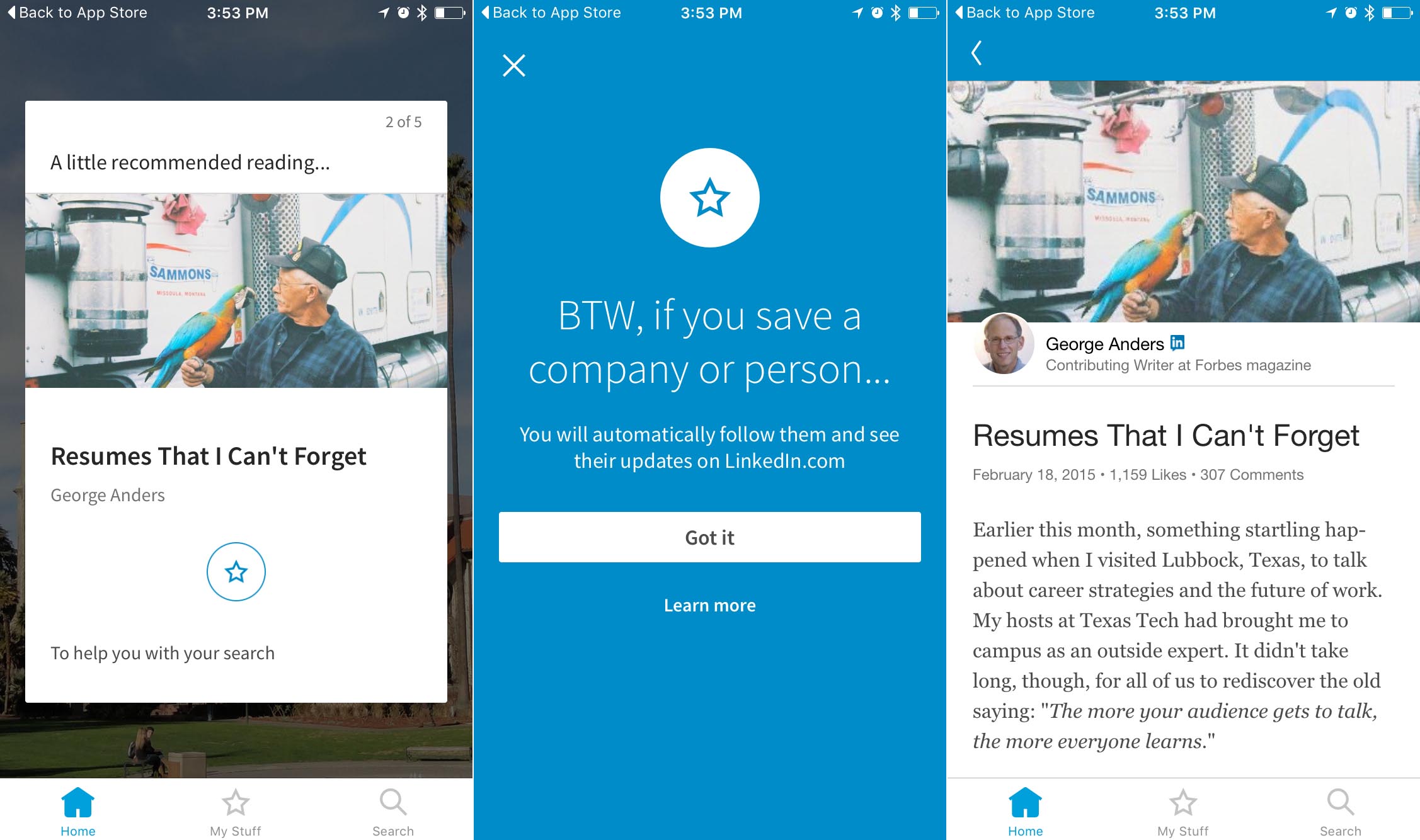 LinkedIn Students also shares recommended articles, written by influencers and displayed based on how close you are to graduating. All of the content is managed through a combination of an algorithm and human curation. There are 500 articles already queued up, but Ada Yu, a senior product manager at LinkedIn, said that the number is still growing. The company’s team will be developing campaigns around things that resonate with students, such as articles about what influencers went through when they were 22 or about their first job. Content that users see on the professional social network may not necessarily be featured within LinkedIn Students, and LinkedIn’s team won’t be creating original content. 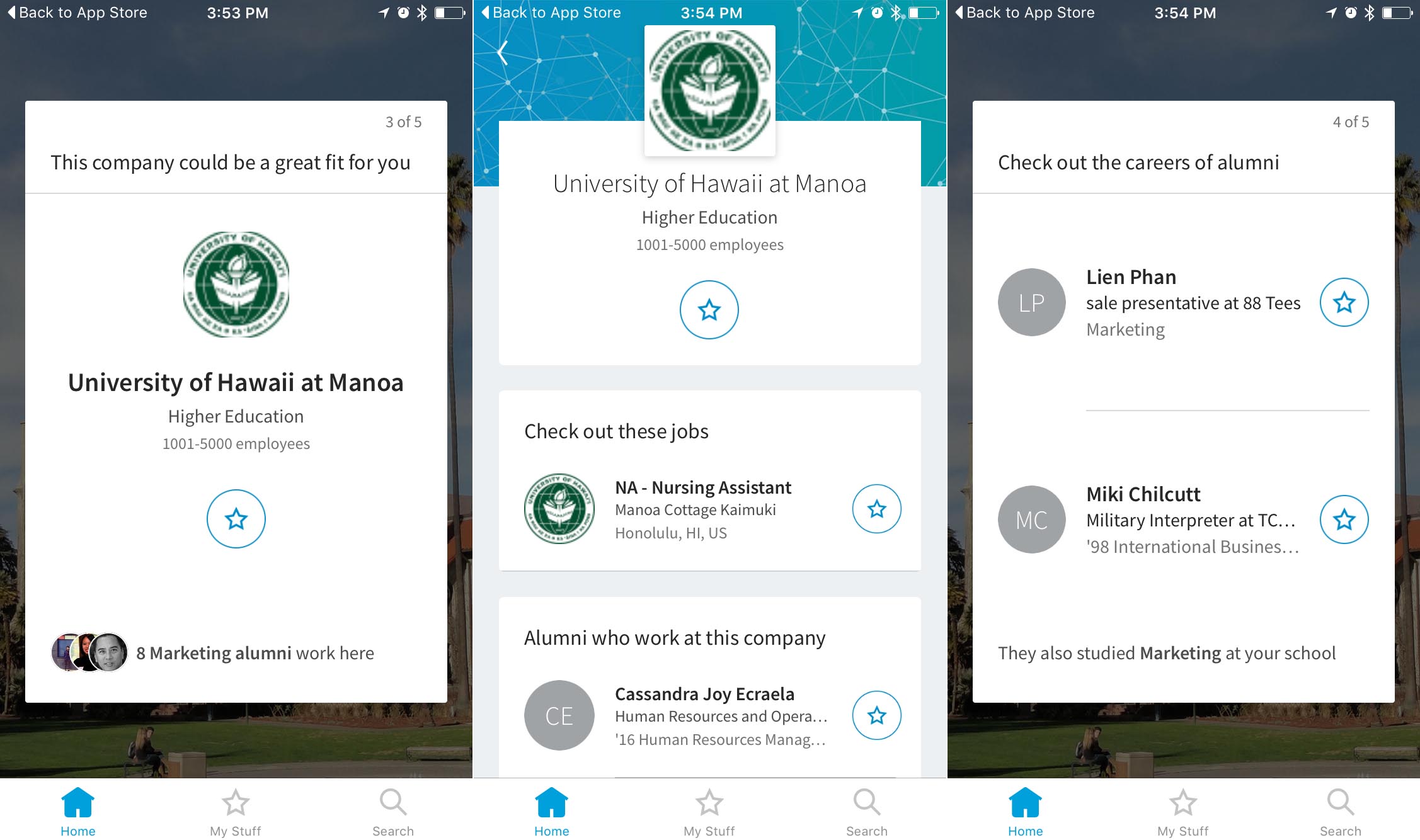 Above: Screenshots of LinkedIn’s Students iOS app showing a company you might want to apply for and alumni from your school you should connect with.

Two other cards include recommended companies and suggested alumni to reach out to. With the former, LinkedIn features firms that are actively recruiting at your school and that it thinks may be a great fit. When digging deeper, you’ll see alumni that currently work there, company information, what specific jobs they’re hiring for, and more.

With the suggested alumni cards, the idea is to give students an opportunity to begin establishing a network of peers in their space. These cards show alumni who you might be inspired by and who have the same major. Ideally, those listed graduated from college between 2 to 5 years ago, but if LinkedIn can’t find anyone who fits that criteria, it’ll pull in more seasoned alumni. Yu said that part of the goal is to increase alumni outreach — some will volunteer to become mentors and are willing to help answer students’ questions. 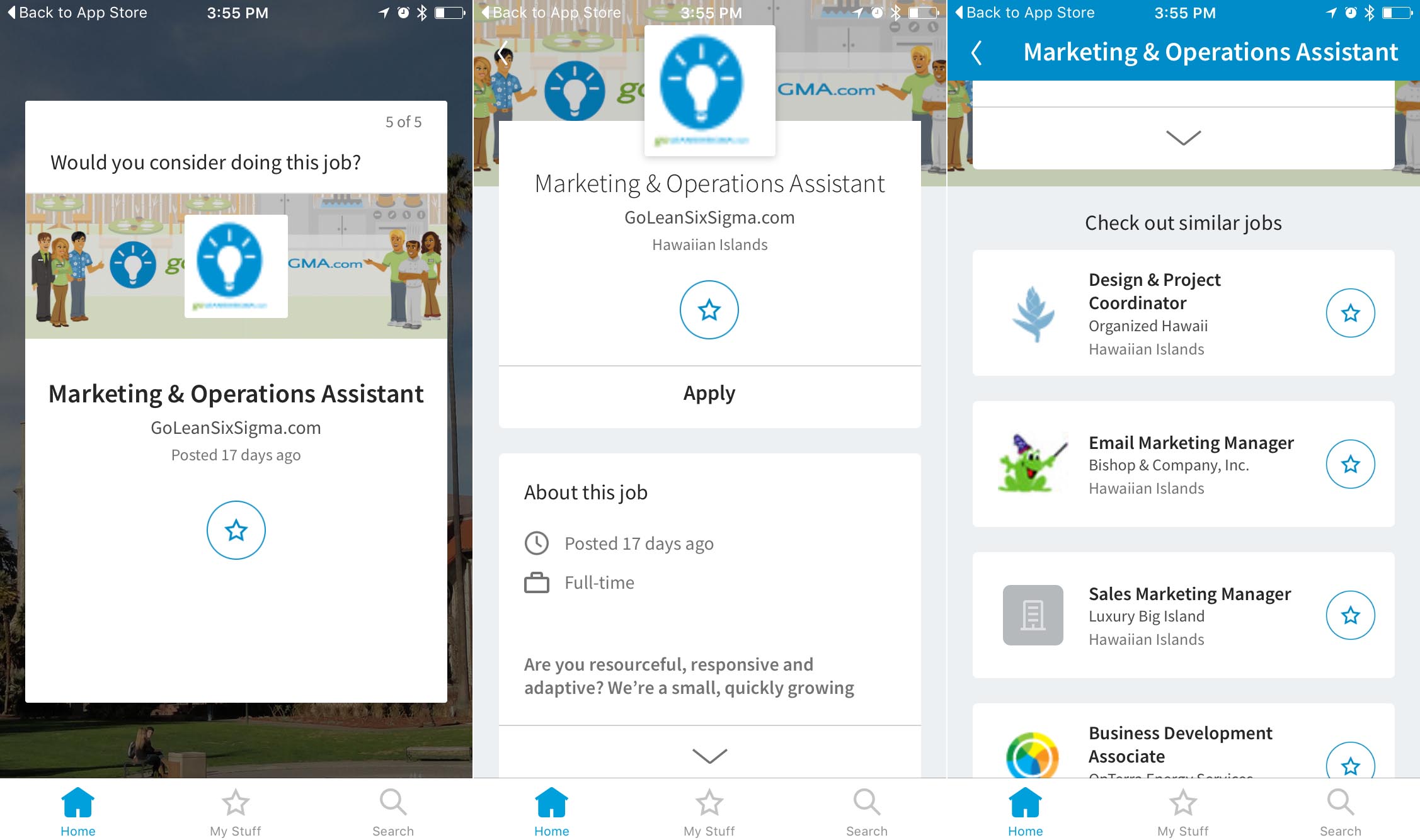 Above: Screenshots of LinkedIn’s Students app showing a job posting you might want to apply for.

The last card suggests jobs you might be interested in and displays actual “help wanted” postings. You can dig deeper to learn more about what the company is looking for, but LinkedIn also encourages you to save the job and view it on the desktop. Yu acknowledges that this isn’t efficient but thinks the application experience will be better on a larger screen.

With any of these cards, you have the option of “starring” anything you like to save it for later reading. LinkedIn will also take your interest into consideration and will adjust its algorithm accordingly to display results that fit your preference, whether you’ve starred a specific role, company, alumnus, or job title.

LinkedIn Students has additional sections, including a place to find all of your saved items and a search option to look up specific roles you might want to know more about that didn’t immediately surface for you.

This app won’t provide you with lists of companies, roles, or job titles, as you’d expect when using a search site like Indeed, Monster, CareerBuilder, or even LinkedIn’s own app. Instead, each “cycle” gives you one item per card. You can refresh the app to get new results, but each card always displays a single item. 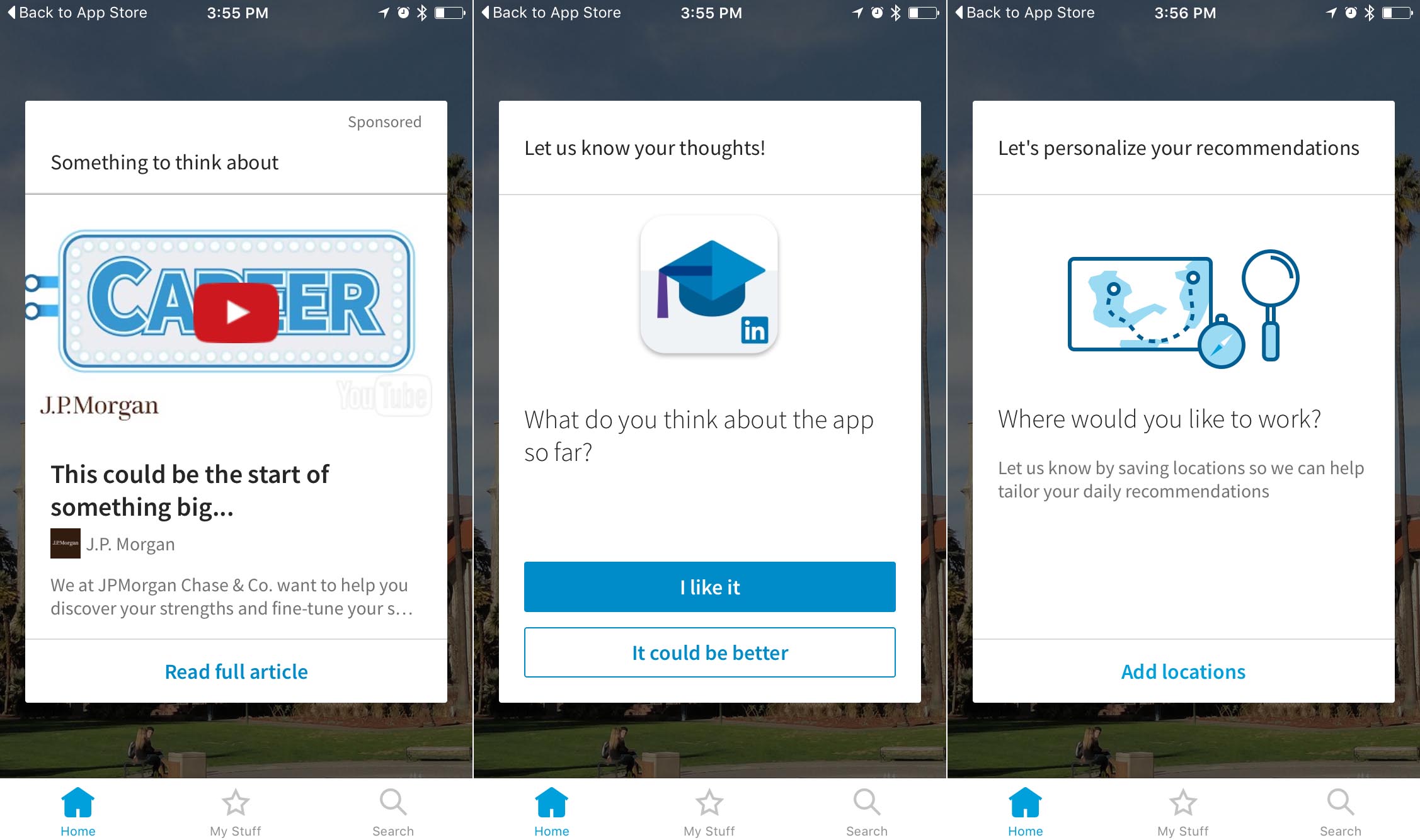 Above: Screenshots of LinkedIn’s Students app “extra credit” section that includes sponsored content and other career tips for students.

And if you’ve gone through all of the recommended cards, LinkedIn Students has a section Yu calls “extra credit.” Here students can continue building out their profiles, by entering projects they’ve done, for example. Additionally, universities can submit events to the app, such as career fairs, recruiting sessions, and more. Yu said that sponsored content also has a place in the app, with JP Morgan as the first partner to have articles featured in this section. However, LinkedIn has no plans to monetize its newest apps, with the exception of the sponsored content that will only be found in the “extra credit” area.

Less about news, more about building a network

Students might think that simply creating a LinkedIn profile will accomplish the same things as using the Students app, but that’s not the case. The standard experience can be overwhelming when you have all of these fields to complete but little information to enter. Many college students are looking for a resource to help them get started and explore their options. As they peruse LinkedIn’s new app, it’s going to start their profile using the bare essentials that they can flesh out later.

For the most part, professionals using LinkedIn are looking for news and insights from their connections. But students want to begin building their network, connecting with people by means they can best relate to: the school they attended and major they pursued. “This is a soft introduction to students who may not know the value of networking and introduce LinkedIn’s value proposition,” Yu explained. 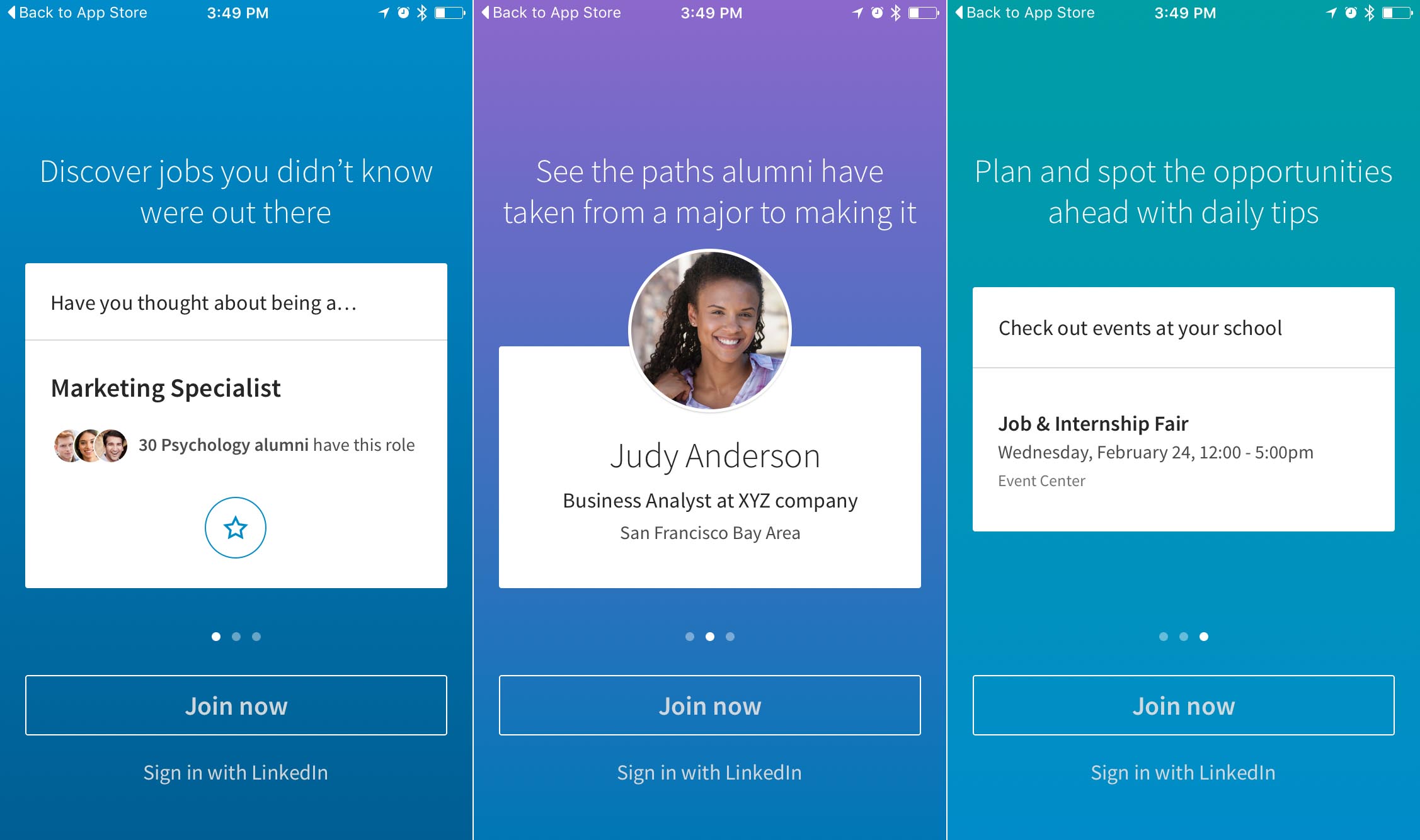 Above: Screenshots of LinkedIn Students introductory screens on iOS.

Prior to the launch, LinkedIn tested out its student app in a pilot program that involved San Jose State and the University of Central Florida. Now that the app is available to everyone in the U.S., the company has taken steps to further streamline its resources. We’re told that its education portal is being shuttered, save for a couple of features: the alumni connections and the university pages. A company spokesperson said that based on feedback LinkedIn had received, students’ top concern was getting a job, so LinkedIn is focusing its university efforts on the Students app.

Appealing to college students is important for LinkedIn as it seeks to demonstrate that it can continue to grow and remain relevant in the constantly changing technology landscape. While working professionals are its bread and butter, the company needs to get the next generation on board. LinkedIn Students is beneficial to soon-to-be graduates, but it’s also a way to get them hooked on the professional social network and help them realize its potential, as well as encouraging them to buy into the “economic graph” that the company is selling.

What’s missing from LinkedIn Students at launch is an integration with Lynda.com. As students are shown job titles and companies that they may be interested in, it would make sense to give them information about what courses they should take to prepare for those opportunities. Lynda.com‘s recently launched “Learning Paths” feature could have an impact in this area, but LinkedIn hasn’t really integrated its acquisition into the core app yet.

LinkedIn Students can be downloaded on iOS and Android devices. While it’s only available in the U.S., there are plans to roll the app out internationally later this year.

Updated on 8:14 p.m. Pacific on Sunday: LinkedIn has pulled its Students iOS and Android apps, as they were posted prematurely. They will be available starting 6 a.m. Pacific on Monday. This post has been updated to reflect this change.

Updated on 9:49 a.m. Pacific on Monday: LinkedIn Students is now available for download on the App Store and Google Play. This post has been revised.