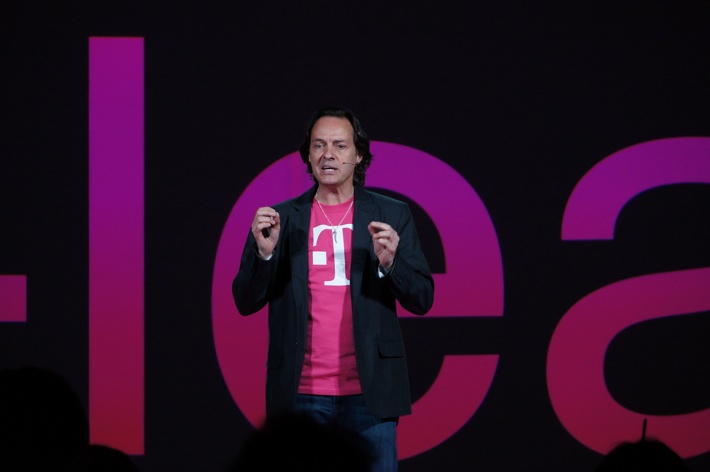 NEW YORK CITY — At a low-key press event today, T-Mobile made it clear that it’s not just another carrier anymore.

The tone was set the moment you entered the event, which was filled with signage railing against the evils of cellular contracts. A wall-sized poster highlighted the confusing language of typical contracts, and there was a bill shock hall of shame, detailing some horrific stories of massive cellphone bills. Attendees were also forced to walk through a mock “contract detector,” which approved or denied our self-worth seemingly at random.

The festivities kicked off with a short man-on-the-street video featuring The Daily Show‘s Jason Jones, who went around New York City asking typical consumers about their cellular experiences. To simulate the abuse consumers see from typical carriers, he repeatedly hit them in the face with his microphone.

“Please stop the bullshit!,” he shouted.

A new kind of cellular carrier

So how is T-Mobile going to fix things? It starts with its new contract-free plans, which start at $50 for unlimited talk, text, and data (500MB of which is 4G). They’re also notably simpler than competing plans. “When you choose a T-Mobile rate plan, you get unlimited everything: no caps, no overages, no bill shock, only one rate plan,” he said. “We call it the simple choice, and it’s obvious.”

You can add a second line to your T-Mobile plan for an additional $30 and additional lines for $10 each. The plans also include tethering at no extra cost (though it’s data limited on the $20 unlimited high-speed data account).

Additionally, T-Mobile is going to be much clearer about the cost of phones. You can purchase phones at full-cost or split up the cost in your monthly bill. With its base plan, plus $20 a month to pay off a device, T-Mobile says you’ll save $1,060 over two years when compared to AT&T’s plan.

“Oh, yes, woe is me, you’re going to have to pay for your phone,” Legere said. “We’re just not lying to you. We’re laying the rules down.” 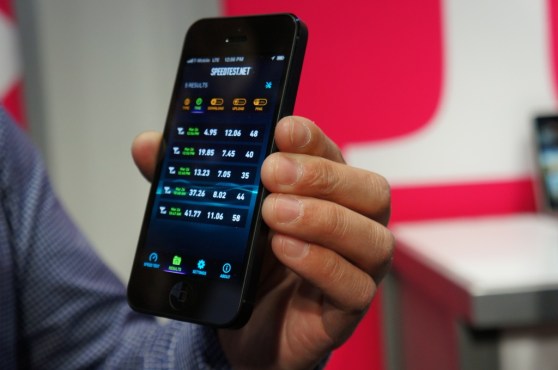 Above: T-Mobile’s iPhone 5 saw LTE download speeds between 14 Mbps and 42 Mbps at the event, which is in line with typical LTE speeds.

As a “small” update, Legere revealed that T-Mobile will finally offer the iPhone 5. Customers will be able to purchase it for $99 starting on April 12 (the remaining cost is covered by an extra $20 on your monthly bill for 24 months). Additionally, he noted that Apple added some new technology to T-Mobile’s iPhone 5 — it can now support LTE networks, HSPA+ 42 Mbps, and other HSPA networks.

That means T-Mobile’s iPhone will be far faster than the competition when outside of LTE coverage. In contrast, Verizon users get stuck with its slow 3G network when they drop off LTE.

“This is just a start, we’re going to be doing a lot of things … it’ll be very direct, very in your face,” Legere said with the conviction of a preacher. “The message is we’re not just aother phone company — we’re about changing this business. It’s not self-serving, it’s abut customers. Customers don’t need another AT&T, customers need someone to stop acting like AT&T.”

T-Mobile is also going to have a strong array of devices available at just $99, including the new HTC One and BlackBerry Z10. The carrier also announced that it will offer Samsung’s Galaxy S IV on May 1.

During the Q&A portion of the event, T-Mobile’s executives deflected the notion that it’s being unclear about data throttling. They pointed out that all of the rate plans see the same 4G speeds up until their posted limits (the base $50 plan tops out at 500MB, while the $60 plan tops out at 2.5GB).

The $70 fully unlimited 4G data plan won’t be throttled unless it inhibits the fair access for another customer. One of the T-Mobile executives noted that the company already has unlimited customers using more than 50GB per month who don’t get throttled.

“If there ever is a case where we’re going to use a fair use policy, we’re going to post it so you can take a look at it,” Legere said. “It’s not a number — if someone is having a party at 3 a.m. [using a ton of data], I don’t really care.” 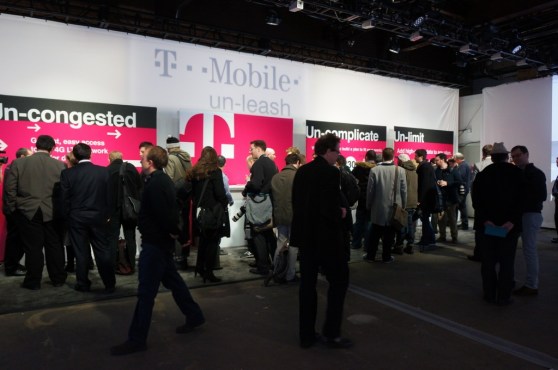