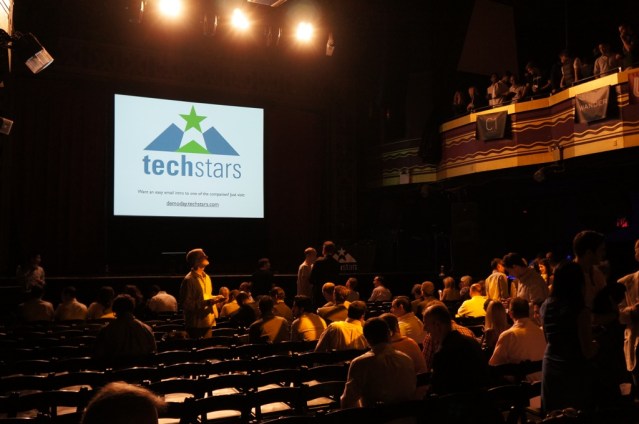 It’s graduation day for startup accelerator TechStars NYC’s Spring 2012 cohort — though from the vibe at Webster Hall, it feels more like we’re at a rock concert.

The Spring class kicked off in March with 13 companies chosen from a pool of more than 1,600 applicants. This is TechStars NY’s third demo day, after launching in the city just 18 months ago. The accelerator proudly notes that five of the companies demonstrating today have female cofounders, and two of the companies are also international.

“TechStars was founded on mentorship,” said TechStars NY’s David Tisch. He added that many mentors went on to invest in the companies they helped out, and continued to mentor them throughout their lives.

Aims to give you a way to invest in local businesses. Co-founder and CEO Jay Lee says he wants to give businesses an alternative to the broken lending system. He claims there’s a $22.7 billion market for crowdfunding local businesss.

“SmallKnot is not simply a funding solution, it’s a tool for community and customer engagement,” Lee said.

Calls itself a “radically different moving company.” MoveLine is bringing technology into the $25 billion a year moving industry, which should ultimately simplify the process for both moving companies and consumers alike. For example, instead of having a pushy salesperson come and inventory your home, you can use MoveLine to take a video of your home or FaceTime with them.

Puts the history of your life in your pocket, by aggregating social data we’re already putting online.With privacy in mind, the service scores you in more than 300 categories, which makes it easy for companies to grant you offers.

When Bondsy’s CEO Diego Zambrano was moving from Brazil to New York City a few years ago, he decided to put all of his possessions on Flickr for his friends to buy. That led to a fun and social experience that he wanted to recreate.

So he made Bondsy, a single home for you to share and barter with your friends. On the surface, it looks like a revamped Instagram, but Bondsy can also make it easy for people to make deals with each other. For example, you can say you’re willing to spend a certain amount on your friend’s bike.

“Your social graph can finally offer you liquidity,” Zambrano said.

“We’re rewiring the way content gets distributed on the web,” said Marquee’s co-founder. The company is offering a simple and intuitive publishing tool that lets you write and drop media right on the page. But it’s not just another WYSIWYG tool — Marquee is future proofing your content by making it available on practically any platform and device.

“We’re structuring content in a way that enables it to be consumed by anything that has access to the web,” the co-founder said. “We’re laying the groundwork for a syndication platform that can reach every connected device on the web.”

“Finding a class shouldn’t be harder than taking it,” said CEO Payal Kadakia. The site gives you one place to find recreational classes like yoga or biking. It has all of the important information, like when and where the class is happening, and lets you easily sign up for it.

“Life happens at places,” said CEO Jeremy Fisher. Wander is his attempt to let anyone create their own travelogue, and start a global conversation around locations. Just like how Twitter has “@ mentions,” Wander has created a microsyntax for location using asterisks. For example, *Webster Hall* would denote the concert hall the demo day is currently taking place in.

This company wants to create a new form of interactive video by letting you simply move your devices around. CEO Danfung Dennis has spent time as a war photographer, but moved into video to better capture that experience.

ConditionOne, or C1 for short, aims to be the next step in how we experience events. It will allow sports fans to feel as if they’re right in the action, and Mercedes is already using the platform to put consumers right into their high-end cars. And of course, it could do wonders for news coverage.

“We’ve taught a computer to do a bookkeeper’s job,” said CEO Ian Crosby. He claims that 10Sheet can do 95 percent of the work that a typical number cruncher can, and at a fraction of the price. The company’s technology can take your financial records and deliver daily interactive reports — no more waiting several weeks for your bookkeeper to turn things around.

Current customers include PWC, Showboxed, and Etsy, which wants to offer it to sellers so they don’t have to worry about keeping their own books.

A personalized online shopping magazine, the company takes a massive amount of data to create a shopping experience that’s similar to going to the mall with your friends. Pickie’s platform also takes into account notable bloggers that mesh with your own tastes.

“At Pickie we’re moving beyond the interest graph — what  we’re building is the product graph,” said CEO Sonia Sahney Nagar.

Funding: Raising a $1 million seed round

Wants to be the future of mobile workforce collaboration. “We built Lua because that computer in your pocket is the single most powerful tool in your business life,” said CEO Michael DeFranco. The company has signed American Idol, the crew working on the Dark Knight Rises, and the Mets, to help manage their workforces.

DeFranco says Lua could apply to practically any industry, as its current customers show. The app keeps everyone on the same page by making it easy to message or conference call others, coordinate on tasks, and stay updated with a company-wide calendar.

DeFranco announced today that the company is partnering with YouTube to cover the Olympics this Summer.

Funding: Oversubscribed on a $2.5 million seed round.

“We believe in totally different things, like simple design, simple technology, honest pricing, and honest service,” said CEO Robert Gaal. He says the company is the world’s first-ever software-focused mobile provider. He showed off a 4G hotspot that will retail for just $69, and will operate on ClearWire’s 4G network.

A single gigabyte of service will cost you $14, and there are no contacts to deal with. You can also easily share your Karma hotspot with any other Karma user — both of you will get 100 megabytes of data as a referral bonus.