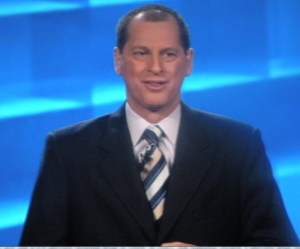 Sir Howard did a good job showing off a combination of cool technology and Sony’s clout in rounding up celebrities to appear on stage with him for his keynote speech at the CES show in Las Vegas today. Thanks to Sony’s movie studio, he’s got an unfair advantage over Microsoft’s Steve Ballmer in that department. But I liked the OLED plastic display and the Wi-Fi digital camera. Beyond that, I can’t say there was a ton of unexpected news.

What follows is my detailed live blog of the event as it was happening:

8:37 am: Sony chief executive Howard Stringer will be out shortly. Meanwhile, Consumer Electronics Association chief executive Gary Shapiro began with a Yoostar video where he used the service to insert himself into classic movies, with funny effect and jokes about how crucial consumer electronics is to the economy. On stage now, Shapiro said the country has faced tougher problems before. Though we are “gripped in the worst economy since the Great Depression,” Shapiro said, free economies will both fall and rise. He said the consumer electronics industry isn’t seeking bailout money. That might make him more welcome in Washington, D.C., as the industry’s chief lobbyist.

“Innovation is the best medicine to end economic stagnation,” he said.

Only a few times in the last four decades has the consumer electronics industry shrunk. In 2008, it grew four percent. But it will see a 0.6 percent revenue drop in 2009. In 2001, the industry shrank three percent after the 9/11 attacks and the collapse of the Internet bubble.

On the policy front, Shapiro urged President-Elect Barack Obama to expand H-1B visas to let in more students in engineering and science. He says the show will have 2,700 exhibitors across 1.7 million square feet of exhibit space. The show is expected to draw 130,000 people through this weekend. 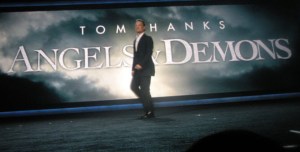 9:02 am: Howard Stringer has not quite taken the stage. Instead, Sony is showing a clip from Angels & Demons, another Tom Hanks movie based on the book by the Da Vinci Code Author Dan Brown. And Tom Hanks is now on stage regaling the crowd with a stand-up routine. “I have no voice as a consumer electronics visionary,” he said. “I bought a laser disc. Before I begin with my remarks written by a lowly Sony marketing executive ….” He mentioned his Bluetooth video player. (Ha). “They write the lies, but I tell the truth.” If Bluetooth works, out, “he will be known as Lord Howard Stringer.” 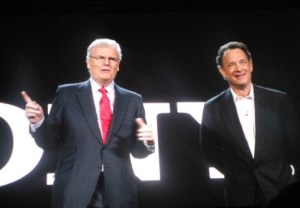 9:10 am: Hanks brings Stringer on stage and says he’s here “because you keep writing it into my contract.” Stringer’s first demo: glasses where you can watch a movie and see what’s before you at the same time. Hanks ridiculed the technology, which truly did suck. Why would you want to wear these glasses and see two different things at the same time?

9:18 am: Stringer, on stage for his third CES, says the prototype technology will be sent to Hanks as soon as it’s complete. Hanks says, “You mean it can get even better?”

Stringer, on stage alone, said there are a bunch of things that the industry can do to create a better experience for consumers. Products have to work together, be multifunctional, access multiple types of content, be service-oriented, and support open technologies. He said “closed systems are being disintermediated.” That’s pretty far from the old closed Sony philosophy. Devices have to be connected. By 2011, 90 percent of Sony’s products will be connected to the Internet, he said. 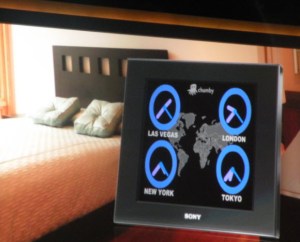 9:24 am: He is talking about Sony’s firsts last year, like a Bravia TV with 240 Hertz refresh rates, something that every TV maker has now talked about this year. He is waving around a new Cyber-shot G3 digital camera with Wi-Fi picture uploading. It will work with nearly 10,000 AT&T Wi-Fi locations. This model is available now at select Sony Style stores for “an extraordinarily reasonable price.” (Laughs).

9:26 am: Now Sony is going to do a Wi-Fi connected clock radio that doubles as a digital picture frame. It’s a joint design with Chumby, which is also working with Samsung. “Wouldn’t you like to wake up with Big Ben, uh, the clock?” You can customize it for your own music preferences through Pandora, and it does a bunch of other functions like news, sports scores with selected video clips, and weather. He repeated a David Letterman joke: it’s so cold in New York that Bernie Madoff is looking forward to burning in hell. He said that “for those of you who are really lonely, it could be the perfect bedside companion.” I have to say that Sir Howard has much better joke writers than Steve Ballmer. 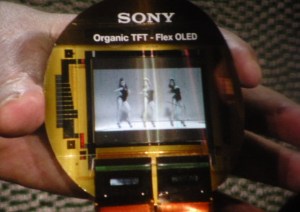 9:30 am: Sony launched a 0.9-inch thick organic light emitting diode TV. Those screens are incredibly crisp, but expensive. It will follow that with 20-inch to 30-inch screens this year. Meanwhile, Stringer showed off a flexible OLED display that can fit in your hand. He displayed it with a Beyonce video and squeezed it, saying, “How many people have a chance to squeeze Beyonce?”

9:32 am: More than 28 million Blu-ray titles were sold in the U.S. in 2008, he said. John Lasseter, of Disney’s Pixar has come out on stage to promote the Blu-ray high-definition experience. He believes BD Live — which lets Blu-ray users interact with videos — is just in its infancy. You can, he says, play games while you’re watching a movie. “Blu-ray doesn’t stop here,” Lasseter said. He says the technology will be complete when you add stereoscopic 3-D for the home, a technology that most TV makers — as well as Nvidia, according to an announcement today — are producing. Lasseter closed with a clip from his latest animated movie. Stringer came out and thanked Pixar and Disney for their support for Blu-ray. Lasseter said he’s in production on Toy Story 3 for the summer of 2010, with Tom Hanks returning.

9:43 am: Stringer says Blu-ray won in part because every PlayStation 3 sold had a Blu-ray drive in it. Now he’s touting the PS 3 and its latest games and Home virtual world. Kaz Hirai, head of Sony’s games division, is taking the stage now. He says the PlayStation Network now has 17 million registered accounts (that’s not as many as the last 30 days’ active users of Xbox Live — not nearly as many). Still, Hirai said it has added 2.1 million accounts in the last couple of months. He’s showing off a PS 3 exclusive game from November, LittleBigPlanet, and is praising its appeal to the mass market. It’s being played online now by 1.3 million people. There are now 300,000 levels available, thanks to user-generated content for this game. That’s pretty impressive.

9:48 am: Hirai is promoting Free Realms from Sony Online Entertainment, launching this spring on the PC as a free to play game (with micro transactions) and later on the PS 3. He says there are 1,200 movies now available on Sony’s PlayStation Store over the network. That compares to 10,000 plus for Microsoft’s Xbox Live Marketplace (which has a deal with Netflix).

9:50 am: More than 2 million users have downloaded Life With PlayStation, an app for the PS 3 that gives you a globe as a user interface. You can click on any given city or region to learn about it or get the weather. An updated version will launch this spring.

9:51 am: A demo of Home. About 3.4 million users have downloaded it, and it’s generated more than $1 million in micro transaction sales. Electronic Arts is now on board to create its own section with the Home virtual world. That’s a pretty good result, even though the service had its hiccups with too many users when it launched in December.

9:54 am: Stringer is back on stage. He says Sony is creating a TV show with Dr. Mehmet Oz this fall. Not sure what this has to do with consumer electronics yet. Oz is now on stage with Stringer. He says your waistline ought to be less than half your weight. “I hope you’re eight feet tall here because I’m running out of inches,” Oz said as he measured Stringer’s waist.

10:02 am: Sony will put 550 Sony Bravia TV sets at the new Yankee Stadium, since Sony is the premiere sponsor. Now Yankee Hall of Famer Reggie Jackson has taken the stage. Jackson says he’s looking forward to seeing the Sony technology in the new stadium, where you’ll be able to order food delivered to your seat, but he is very attached to the old stadium.

10:12 am: Stringer is closing with a 3-D glasses demo. “This isn’t your father’s 3-D,” he said. And he showed a clip from a John Lasseter short, Tokyo Mater. It actually looked pretty good. Now he’s on to a football game as seen through 3-D glasses. On the huge screen, it also looks good.

10:39 am: Jeffrey Katzenberg came out and showed off a clip from his Dreamworks Animation film Monsters vs. Aliens and then sang the praises of 3-D. Sony Music’s Usher came out and sang a final song. And now the keynote is finally done.