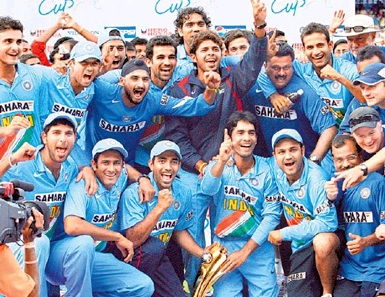 Add together a hot domain name, exclusive rights to popular content, and a big emerging market, and you may have a hit on your hands. That’s Live Current Media‘s plan: It owns Cricket.com, and it has just inked a deal to license photos and videos of Indian cricket matches from the Indian Premier League and Indian cricket’s governing body, the Board of Control for Cricket in India.

The IPL is a new Indian cricket league with a faster-paced format designed to draw in fans. Getting the fans shouldn’t be too hard: Cricket is basically the country’s national sport, if judged on popularity [commenters point out that field hockey is the official national sport]. The league expects to make up to $2 billion from broadcasting and licensing deals signed for the next five to ten years. Finally, the BCCI represents the country’s wildly popular national team.

The Cricket.com domain already gets a lot of one-off traffic from people looking for cricket information on the web. The last time the Indian national team played a cricket match, the site got 30,000 visitors in a day, even though there was only a basic splash page up, the company tells me. It has since put up an email signup page so it can contact random visitors once a real cricket site launches, which has already gained 35,000 addresses.

Eventually, Live Current hopes to make it the main hub for cricket around the world, which puts it in competition with Cricinfo.com, another crickets fan site that gets around 10 million visitors a month, that sports network ESPN bought last year for more than $50 million.

Live Current Media, a Vancouver, Canada company, owns a number of popular domain names (another one, for example, is perfume.com) and it has been making moves to develop a number of its most popular properties. A few weeks ago, it bought auction software startup Auctomatic — and in fact, Auctomatic cofoudner Kulveer Taggar helped put together the Cricket.com deal, and will help lead its development going forward.

Taggar tells me he hopes to turn Cricket.com into a full-blown online community, even bringing in top cricket players themselves onto the site to blog and interact with fans — like what US sports sites like YardBarker have done with football, baseball and basketball stars.

The site hopes to make money through ads, merchandise sales, subscriptions to premium content and other revenue streams.

While traffic will almost assuredly come to the site, the gamble is that the online advertising and e-commerce market in India will grow fast enough over the next few years to recoup the licensing and operations costs of the site.

The Cricket.com property will eventually be spun out, and if it executes on creating a vibrant community out of its content and its domain, it will likely sell to a sports conglomerate looking to beef up its online presence in the cricket world.