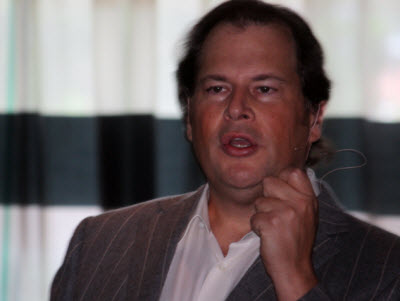 Today Marc Benioff, chief executive of Salesforce.com, warned everybody in the tech industry to embrace social networking and cloud computing or face obsolescence.

In a talk that was originally supposed to be a keynote at Oracle OpenWorld 2011, Benioff said, “Social tech is shaking our industry at the core. It’s our job to transform our own businesses with social power.” 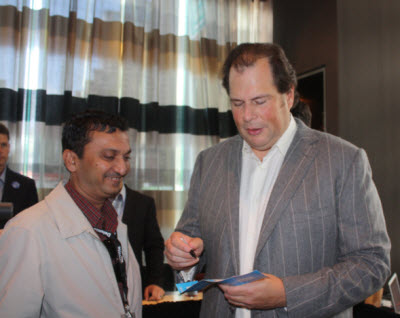 Salesforce.com has made a big push to add social elements to its cloud-based customer relationship management services. That’s because it thinks enterprises have to embrace the same technology that consumers are adopting with the rise of Facebook and Twitter.

“We see a dramatic shift to smartphones, mobile devices and tablets, and PCs are dying off,” Benioff said. “This is the social revolution. You can be Mubarak and say it doesn’t exist,” a reference to the Arab Spring protests that took down Egypt’s president.

The event drew some attention because of a small behind-the-scenes drama. Benioff was originally scheduled to talk about cloud computing at the Oracle OpenWorld 2011 conference, but just a day before Benioff’s keynote, Oracle canceled the speech.

Benioff, in classic fiery fashion, decided to hold his keynote speech anyway, inside a nearby restaurant, Ame. The venue could hold maybe 75 people, so it was a small gathering. But Benioff was loud, and he didn’t really need a microphone.

Benioff said today that the speed with which his team moved to find a new keynote venue showed how flexible cloud-based companies could be. His team planned the event on the company’s Chatter internal social network and Benioff spread the word about the new event on Twitter.

AllThingsD reported Oracle spokeswoman Deborah Hellinger said the move was a change in schedule, due to the heavy attendance at the conference. The Salesforce.com “executive solution session” was moved to Thursday at 8 am in the Novellus Theater.

Benioff used to work for Ellison at Oracle but he broke off to create Salesforce.com, the customer relationship management service provider that touts cloud computing, or services based on web-connected data centers rather than client-based software. Benioff has been critical of Oracle in the past, saying that it advocates a “false cloud.”

He said “We are not selling a proprietary mainframe (a reference to Oracle). We are creating a new way of doing business.”

In the talk, Benioff said Salesforce.com’s revenue run rate is at $2.1 billion and the company has more than 100,000 customers. Each quarter, Salesforce.com processes more than 36 billion transactions.

“All of this architecture is built on the cloud,” he said. “It is open, it is not proprietary. That is not the message of the show. It is not democratic. That is the false cloud.”

“That was after the show was over,” Benioff said.

Benioff said that in the past year, Chatter has become deeply integrated into the operations of enterprises. In Chatter, you can follow the activities of people in your company. You can follow customer accounts and big deals. The software presents you with a Facebook-like news feed for you to follow. You can embed videos and work together socially.

“Why do I know more about friends on Twitter or Facebook than employees?” Benioff asked, referring to typical CEOs of big companies. He said, “Bank of America’s newest branch is on Twitter. We know because we built it.” KLM has also opened a new ticket sales information channel on Twitter, using Salesforce.com’s help. With that Twitter account, KLM answers questions from anyone within an hour.