Note to makers of software tools for sales: Guys, please get together and simplify your naming.

Such B2B tools are variously self-described as sales enablement, sales enrichment, sales engagement, sales content tracking, sales opportunity, and sales optimization, among other variations. Definitions vary and different labels are sometimes used for the same tool, while the tools themselves overlap in functions.

They’re really all sales automation, LiveHive CEO Suresh Balasubramanian told me. But it’s “more than a science, [and] a little art,” he said, which is why using “automation” to describe the field is off-putting.

Regardless of what it’s called (I vote for “sales productivity tools” as a good wraparound), this space is hot. In preparation for another funding round later this year, LiveHive counted up the investment in such companies and arrived at a whopping $1.2 billion over the past three years.

Since January, notable deals included $2.8 million to DemoChimp, $60 million to InsideSales, $10 million for SalesLoft, $15 million to ToutApp, $20 million to Seismic — and today’s $4 million announcement by KiteDesk.

It’s part of an overall trend of big investment into marketing/sales tech. VB Insight has tracked $45.2 billion invested last year in the entire marketing tech industry, including sales tech. There was nearly $3 billion in the first quarter of this year alone.

A key attractor for sales tech: Revenue from the sale of B2B sales technologies is projected to grow to $30 billion in revenue by 2017 from its current $5.5 billion, according to sales platform InsideSales.

That’s being driven by the current average spending of $2,280 on technologies for each sales employee in U.S. organizations, again per InsideSales.

Balasubramanian himself embodied the driving forces behind these tools when he recently had to buy some human resources software for his company. Instead of the old world of RFPs and visits by sales reps, he said, “my buying process was like buying from Amazon.”

His experience is typical. One oft-cited study found that nearly 60 percent of the B2B buying process is completed before the buyer engages with a salesperson. Whitepapers, reviews, industry studies, and the like self-educate the buyer, who arrives at sales with her mind at least partly made up. The next step often involves remote presentations/demos, audio/video conferencing, and remote or self-service order taking — not a visit from a sales rep.

This Amazonization of B2B sales has led to at least two structural changes: the growth of inside sales, and the increasing interconnection between marketing and sales.

Balasubramanian said he’s finding five to ten inside salespeople for each outside salesperson. InsideSales’ report said that inside sales operations are growing 15 times faster than field sales.

A sales rep might now be handling 50 accounts, he said, instead of perhaps ten in the old days. So, long-distance productivity tools — like phone dialers or the ability to quickly send and track emails, presentations, and whitepapers — are essential.

As is a closer integration between marketing tech and sales tech. When the customer is mostly selling herself, marketing’s traditional role of generating leads and sales’ role of closing deals are under reconstruction. As VB Insight analyst Andrew Jones noted, marketing tech’s current level of integration with customer relationship management isn’t enough. 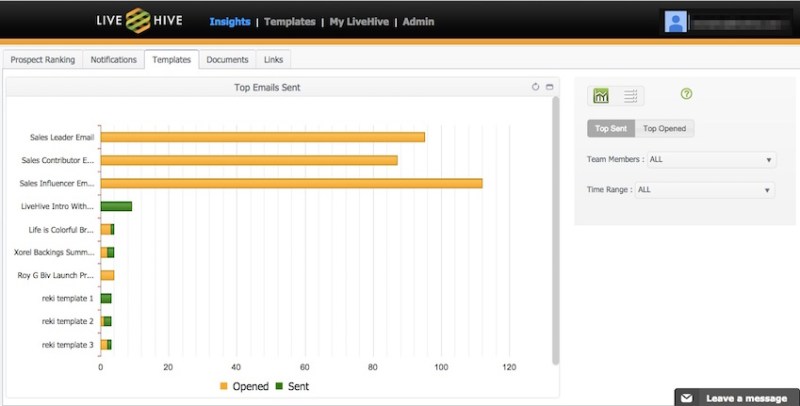 Above: A screen for follow-up, part of the new features in LiveHive’s sales platform.

The new features announced today for LiveHive’s content-sharing and analytics platform embody both trends: more inside sales and closer ties with marketing.

LiveHive now offers customizable email templates that can track results within an Outlook or Gmail inbox, bulk email scheduling and sequencing by sales teams with pre-attached documents, and the ability to automate tasks.

In other words, these new functions help a salesperson work remotely to feed a prospect’s interest with marketing-generated content, and to conduct a one-person email marketing campaign.

They provide more productivity features for sales departments very much in flux, and investors love flux.