LiveMarkets launched a service yesterday that lets Web site visitors click on an advertisement and immediately IM chat with a salesperson from the advertiser.

While other startups offer ways of managing the buyer-seller relationship online, LiveMarkets keeps the chat live on the page, right on top of the banner ad, text, or other part of the site. It’s the latest significant innovation in an online advertising market that is booming.

Using LiveMarkets, the advertiser agrees with the publisher about where the chat box will show. The chat service is useful, because it’s much faster than a phone call or an email if a prospective customer wants to talk to a real human before deciding to buy a product .

Below is an example of how it looks (more at bottom). 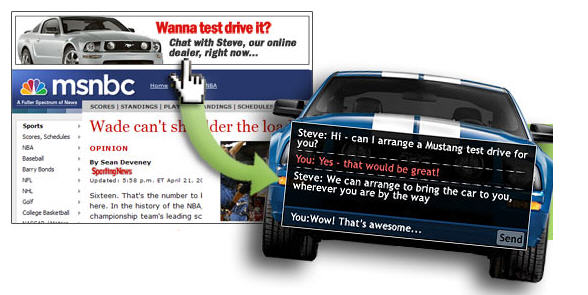 Advertisers can manage their incoming chats via an administrative interface. People on an advertiser’ sales team can manage more than one chat at a time, with new chats getting directed to the salesperson with the fewest concurrent chats. While LiveMarkets has yet to post the cost of the service, it says it plans to charge advertisers and publishers on a per-chat (CPC) or per-impression (CPM) basis.

Co-founder Justin Kirby brings experience with chat, having worked with Jabber open-source instant messaging technology (which powers Google Talk and other IM services). He originally applied the experience at a previous startup, Qunu, a “mashup of search and instant messaging” for user-generated questions and answers. That site is still live, but Kirby and his cofounders have moved on to do LiveMarkets; they’ve modified the software code from Qunu in the last two and a half months, and have filed a provisional patent on the technology.

The Rocklin, Calif. company of four is self-funded, and launched yesterday at Ad:Tech San Francisco, a major advertising conference. Its frugal nature showed. While the booths of most other companies were glitzy, LiveMarkets couldn’t afford an Internet connection, so they brought their own server; their small banner was strung together with twine; even the room’s carpet didn’t reach their corner, and cardboard boxes were piled behind them. Despite the ignominy of it all, they managed to get approached — by four venture capital firms, six advertising networks, numerous ad agencies, plus two requests for a “white label” version, according to co-founder Baden Gilmore.

The idea seems intuitively useful, there are questions how broadly it will catch on. How often do consumers actually want to talk to a salesperson? It seems most useful for complex purchases, for example to talk with a computer manufacturer, or for help with service (indeed, many sites are already doing such chats from their home pages). However, many forms of online advertising, such as banner ads, have notoriously poor click-through rates. Will people both notice and care about a chat option? Gilmore believes that the one-on-one intelligence and connection will be more effective in closing sales than static banner ads.

One problem: If LiveMarket is a success, it faces the prospect of having its features copied by Google, Yahoo and the other online advertising giants.

The company’s Web site points to a blog post from marketing guru Seth Godin: “Modems are no match for human interaction and trust. Not carefully tracked online ratings, but the sound of a voice, the tone of authority, the receipt of a favor. It matters more than it ever did.” 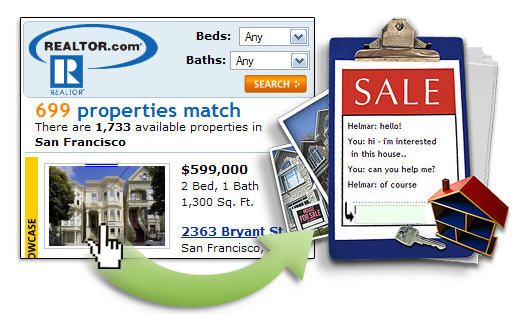 [Author Eric Eldon thought he was going to become a professional journalist when he graduated from college two years ago. Instead, he is co-founder of Writewith, a company that makes online word processing work for groups. You can reach him at eric@writewith.com.]