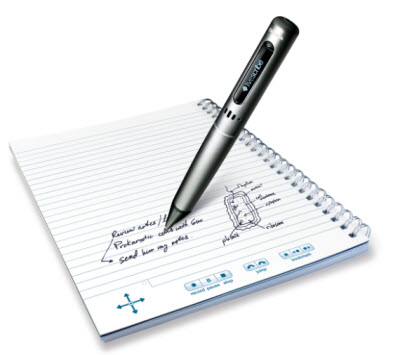 Inspired by Apple, every hardware maker is creating an app stores these days. Today, Livescribe is launching a beta platform that allows developers to create apps for its Pulse smart pen. There are already 30 cool third-party apps available in the Livescribe store, which is open for shopping.

The smart pen turns ordinary writing into a digital experience. With the smart pen, you can record a lecture as you take notes on a special paper that tracks your writing. If you put the pen on a particular section of the writing, the pen will play back the audio of the words that were being spoken at the time you took the notes.

It can do that because the pen comes with flash memory for audio recording an a microprocessor. The new apps can take advantage of the hardware, since Livescribe has opened up its platform for others. The new apps include language dictionaries. With those, you point at a word on paper and the pen will display a translated version of the word on its monochrome display. 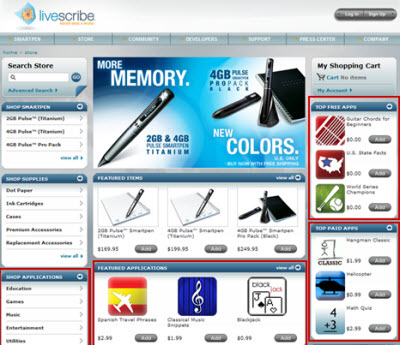 Among the new apps, is an educational tool for adults learning English as a second language. There are tools for the visually impaired, medical transcription, oil field services, games, utilities, and productivity tools.

An example of an educational app is U.S. Presidents. When you write a number, the pen will display the name of the president. If you write 44, the pen displays Barack Obama, for example. I tried some of the apps out, such as a classical music app that will play a clip from Bach for you if you tap on a word on a piece of paper. It really is amazing to make something happen just by tapping on a piece of paper or writing something down.

Byron Connell, head of marketing at the company, said he expects to see audio transcription services available sometime next year for users who want their handwritten notes converted into text. That could be the ultimate app for LiveScribe.

The company is trying to emulate the success of Apple’s iTunes/AppStore business model. The Oakland, Calif.-based company has also given a facelift to its Livescribe Desktop software, smartpen firmware and its online store.

The company doesn’t disclose exact sales numbers. But Connell said that revenues were up 2.5 times over a year ago, and he expects sales will double in the coming year. If sales keep growing and the app makers develop new software, Livescribe will find itself in the enviable position of having an app economy. So far, there are 5,500 registered developers. For every app sold, LiveScribe keeps 35 percent.

The pen is now available in 25 countries and it can be found in a lot of locations in the U.S., including Best Buy, Target, BJ’s, and Costco. There are other signs of momentum. The City of Sacramento, for instance, is using the pens to share notes of its meetings online. Numerous school districts are ordering pens by the thousands.

The company was founded in 2007 and has 70 employees. Over its history, the company has raised $48.8 million. Investors include Aeris Capital, Lionhart Investments, and Vantage Point Venture Partners. There are related smart pens on the market from Leapfrog Enterprises, but those pens are aimed at much younger users. Livescribe targets its smart pens at college students and adults.