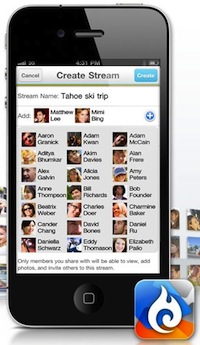 Palo Alto startup Cooliris’ mobile and Web photo-sharing application LiveShare hasn’t attracted as much publicity as some of its competition, like Instagram or Color, but it looks like the app has built a substantial audience nonetheless.

Co-founder and chief executive Soujanya Bhumkar shared some numbers today to illustrate that point. First, he said LiveShare sees more than 4.2 million active users each month. That number seems almost crazily impressive for an app that only launched in January — fast-growing Instagram, for example, has 5 million registered users (a number that’s always higher than active users) eight months after its launch.

LiveShare didn’t build that user base from scratch, Bhumkar acknowledged. Many of those people were already using Cooliris’ 3D wall for browsing photos and other media (which also provides some of the underlying technology for LiveShare), and Cooliris worked hard to bring them over to LiveShare through ads and other methods. But even so, we’re talking about active users, not people who create accounts and abandon the app. And Bhumkar had some other statistics about actual usage:

So how can you distinguish LiveShare from all the other photo apps out there? Well, it’s available on multiple smartphones and on PC Web browsers. And it offers a different model for sharing — each “stream” of photos is shared with a different group of friends, determined by you. And there are public streams as well. Paris Hilton, for example, shares photos of her daily life on her LiveShare stream with all of her fans (I didn’t realize that Hilton had a devoted fanbase, but I’ll take Bhumkar’s word for it), and they’re automatically uploaded to Facebook and her personal website as well.