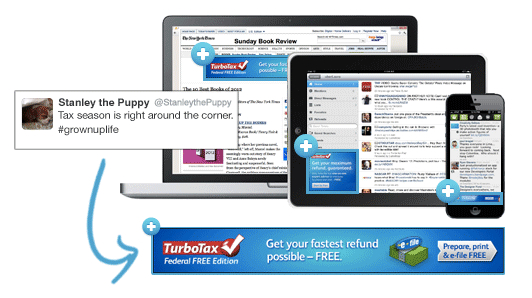 LocalResponse’s pitch is simple, but ingenious for the ad set: it combs social media data to better target ads on mobile devices and desktops. That means more interesting ads for you, and hopefully better conversions for advertisers (especially those struggling to figure out how to make mobile ads work).

The social focus seems to be paying off for the company, as it announced today that its first quarter revenues increased 716 percent from last year. That’s particularly notable, since its revenues for January 2012 ended up equaling its sales for all of 2011.

“There’s been this hunt for [ad] inventory that performs better and is more targeted to the end user,” said Nihal Mehta, LocalResponse’s chief executive and co-founder, in an interview with VentureBeat. “I think we are one of the few ad networks that actually really perform.”

Mehta laid out three big reasons why the company is performing so well: More brands are shifting their ad spend to digital (he predicts 2013 will be the biggest ever for digital ads); the economy is on the rebound and brands are realizing consumers are ready to spend again; and finally, consumers are more social than ever, which gives LocalResponse plenty of data when it comes to targeting.

“We make ads more relevant and more contextual through these social signals,” Mehta said. “If you tweet ‘I’m hungry,’ you could see a banner ad for Pizza Hut on your phone. If you check-in to Wal-Mart on Foursquare, you could see an ad for Target the next time you go to CNN.com.”

The company’s strong ad performance has attracted some big clients like State Farm and Best Buy, 19 percent of which are Fortune 100 companies. It also announced today that it’s opening an office in Los Angeles. In an ad campaign using LocalResponse’s Direct Intent Targeting, L’Oreal saw a 0.19 percent click-through rate — ten-times the typical click-through rate of around 0.02 percent.

LocalResponse competes with 33Across and SalesForce’s Marketing Cloud (built out of the remains from Buddy Media), but Mehta tells me it has built something truly unique. The company has upgraded its infrastructure to handle 10 billion social media signals a month (which is almost the same as Twitter’s monthly usage), and it’s also natural language processing algorithms to determine intent from social data.

Mehta felt particularly vindicated in LocalResponse’s social focus after hearing about Foursquare’s potential plans to resell check-in data to advertisers. That’s something he predicted would be huge two years ago.

Since the company is so focused on ad targeting, I asked Mehta how LocalResponse could take advantage of something like Google Glass.

“Glass for us won’t be an ad interface, but it could be a data signal,” he said. For example, it could take advantage of the fact that you’re taking a lot of pictures of a particular place or product, or simply spending a lot of time looking at something. “We want to stay laser-focused on social signals. But I think it’s cool, I think it will have as much of an impact as the iPod had in the music industry and the iPhone had in the phone industry.”

LocalResponse was founded in 2010 and has received around $8 million in funding.