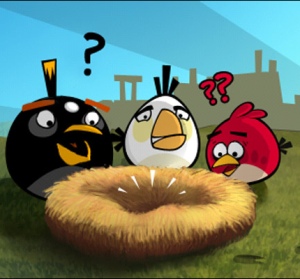 Patent licensing company Lodsys fired a shot at some of the biggest game makers in the world with an amended patent lawsuit against Angry Birds maker Rovio and gaming titans like Electronic Arts and Square Enix.

Lodsys originally filed a lawsuit against seven small iOS developers back on May 31 that center around Lodsys’ patents, but now the complaint includes Rovio, EA, Atari, Square Enix, and Take-Two Interactive.

“Lodsys is not afraid of suing deep-pocketed app developers,” writes Florian Mueller of FOSS Patents. “I’m not surprised, given that Lodsys has three other lawsuits going, all of them against big companies including the likes of HP, Brother, Adidas, Best Buy, The New York Times Company, etc.”

The lawsuit says Rovio and the other companies have infringed on a patent that covers in-app billing technology. Lodsys wants to be paid 0.575 percent of all U.S. revenue generated using this process.

Rovio’s Angry Birds is one of the best selling games of all time. It has been downloaded more than 250 million times and currently has more than 100 million active users. If Lodsys is successful at suing Rovio and others, it could end up with substantial revenues.

Lodsys has filed complaints against a total of 37 companies across the tech spectrum. Apple has argued that its patent licenses purchased from Lodsys extend down to the iOS app developers being sued. It’s questionable whether Apple has a strong case, but that will be determined in court.

The companies actively being sued by Lodsys includes Android app makers as well, with Angry Birds being the most prominent cross-platform app on the list.

“Recently, Lodsys sent a number of assertion letters to Android developers, and Android community websites increasingly report on the problem,” Mueller writes. “Google’s silence and inactivity about this issue makes it likely that Lodsys will sue more Android developers if they don’t pay.”

What do you think about these lawsuits targeting mobile developers? Is Lodsys justified in suing?