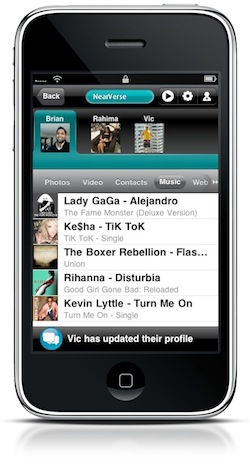 There are a number of companies at the South by Southwest Interactive conference in Austin offering their own way of sharing your location with friends. LoKast, an app from a company called NearVerse, is launching a mobile app with a compelling spin on that idea — instead of sharing your location with people elsewhere, you share media with people in the same location.

In other words, when you open the LoKast app, you get a list of anyone else who also has LoKast open in your proximity (about 300 feet). When you click on their profile, you can see and download any content they’ve uploaded for sharing, including contacts, photos, songs, videos, and links. For example, if you’re at a conference, you might share the contact information of yourself and business partners, so anyone else at the conference knows how to reach you. Or if you’re at a concert, you could bring a favorite playlist, which all the other concert attendees would be able to view. And users could tailor the content they’re sharing to the occasion.

Co-founder Boris Bogatin describes LoKast as a way to link our online and physical activities.

“We’re doing all this internet stuff, we do internet or we do physical, but we don’t do both,” Bogatin said. “But the physical stuff is so powerful and rich.”

Philadelphia-based NearVerse has paid particular attention to the music side of the app. In most cases, you’re not sharing complete songs, but rather short clips and a link to purchase the song on iTunes. But musicians can also create accounts on LoKast where they make their songs available for free download. So if a band threw a promotional concert, they wouldn’t have to give out demo CDs. Instead they just ask everyone to download the songs from their LoKast portal. Then when all those fans wgo to other events, they could offer those songs as free downloads to other people, allowing the music to spread.

As part of its launch, NearVerse is announcing partnerships with music distribution companies The Orchard, IODA and Monalis 360. The model extends to promotional movie clips, which is why NearVerse is also partnering with Magnolia Pictures.

Beyond making money from music purchases, Bogatin said he sees LoKast as a platform for sharing content in other apps, though he didn’t offer many details. He added that LoKast will be adding app-sharing soon, which also provides revenue opportunities.

One of the big challenges with this kind of media-sharing app is speed. If it takes minutes to download a song or contact information, no one’s going to use it. But when the NearVerse team gave me a demo at South by Southwest (where there are lots of iPhone users competing for network bandwidth), the app seemed very responsive, with updates reflected immediately between phones and most (not all) downloads taking only seconds. You can download LoKast from the App Store here.

NearVerse has raised venture funding, but it hasn’t announced the details yet.