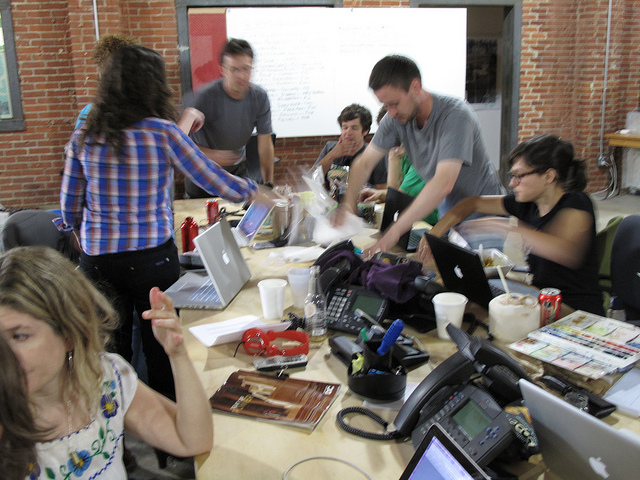 Forget the debates about whether online media is killing print: For the makers of Longshot, the internet makes it possible to publish an issue of a magazine in just two days.

From announcing the issue’s theme (“debt,” according to the announcement that went out today) to collecting submissions to editing them, laying them out on pages, adding art and shipping everything to the printer, the editors have given themselves just 48 hours.

Longshot is one of several seat-of-the-pants literary experiments based on fusing real-world talent and internet tech. For example, Pop-up Magazine is a live event, held occasionally in New York or San Francisco, that is structured like a magazine and features the talents of many magazine writers and editors. Like Longshot, it makes use of social media like Twitter to attract contributors and publicize its unique events.

Longshot cofounder Alexis Madrigal (a friend and former Wired.com coworker of mine) told VentureBeat that the project is only possible thanks to the internet.

“What’s crazy about making an instant magazine is that all the tools we use were created in the last few years,” Madrigal said. “You just could not do what we do in 2004.”

Madrigal posted a list of the tech the Longshot team is using on TheAtlantic.com, where he works during the day as the editor of the site’s technology coverage. The magazine’s toolkit includes:

Still, a lot of it comes down to face time. For the magazine’s previous issue, everyone gathered in the San Francisco offices of Mother Jones magazine, working on a table that was reportedly used to lay out the first issue of Rolling Stone. For this issue, the team will be gathering in the New York offices of blog journalism pioneer Gawker Media.

“Despite the tools for networked collaboration, we all love being in a room together. There still is no substitute,” Madrigal said.

In addition to Madrigal, there’s a team of talented magazine media editors who will be working around the clock for the next two days to get their magazine together.

If you’d like to contribute your writing, drawing, photography or other skills to the new issue, get your submissions in by 3pm Eastern/12 noon Pacific on Saturday, July 30.