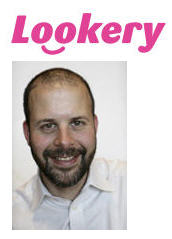 He’s doing this by serving ads within the applications on Facebook’s platform. Facebook’s terms of service let third-party developers access profile data of users. This is extremely rich information that may cause advertisers to froth at the mouth.

Facebook’s 32 million users, many of them college aged, provide a bounty of information about themselves in their profiles — from their age, to geographic location, hobbies and other interests, romantic to academic. Calvin Klein or Fendi for example, can use Lookery to target their ads to users of Facebook applications most heavily used by college aged woman aged 19 to 22, who are romantically involved and are likely to have high incomes because they attend Ivy League schools. Lookery, meanwhile, will be able to charge advertisers specific rates for targeting that demographic.

While it still only serves a tiny outpost of the overall Web, Lookery is significant because it gets closer to what other behavioral companies such as Tacoda, 24/7 have promised but in reality have only been able to approximate. These networks can approximate a user’s gender, location and income levels, but never guarantee it.

Here is the site. The number of application owners who have signed up with Lookery is small, but already in the dozens, according to this list. The ads are only now just beginning to run. See screenshot below for an example of an ad on one of Facebook’s applications. 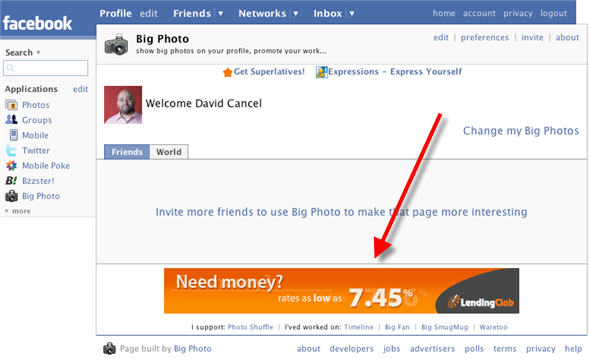 Under Facebook’s terms, Lookery, like other applications using its platform, can retain the demographic and profile information for no longer than 24 hours, after which it must relinquish the information and not retain any of the personally identifiable information. However, Lookery keeps a tab on aggregate data, building demographic profiles of the types of users who tend to use specific applications and their publishers.

Rafer said he hasn’t talked with Facebook about Lookery, but said its campaigns won’t conflict with Facebook’s ad relationship with Microsoft. Lookery’s ads are served only in the area of applications controlled by third-party developers. Further, Lookery will seek to partner with Microsoft to offer up its services to the software giant, to help it target ads better, Rafer said.

Finally, Rafer said several other social networks are preparing to open their platforms to outside developers too. To catch up, they’ll likely clone much of the Facebook standards to expedite the move by developers to their own platforms. That way, Lookery may soon be able to serve ads across multiple networks, Rafer said.

See audio file below for a brief conversation we had this afternoon with Rafer, which elaborates on his strategy, Facebook’s terms and the Microsoft angle. It’s Flash, so RSS readers will not be able to see it. (Apologies for mediocre sound; Scott was calling in from London on Skype, I was on cellphone.)

[Update: We just talked with Facebook Chief Privacy Officer Chris Kelly, who was concerned that some other media following this story have misunderstood what is allowed under Facebook’s terms. Outside ad networks will not be able to target applications based on individual profile data, because they won’t have access to it. Only developers with applications can access the data and use it for a day for the express purpose of serving the application. They can’t use it for other purposes, including providing it to ad networks. Facebook has technology in place to view what sort of queries are being made on its system’s profiles, he says, and will eject applications developers who abuse the terms (as Scott Rafer mentions in audio).]