Lookery began life one year ago as a banner advertising network for third party applications on Facebook, with plans to target ads to users based on demographic data. It’s ended up as a company that collects anonymized demograhic data about sites around the web, and sells this information to ad networks in order to help them target ads.

Rivals, like Revenue Science, attempt to track complex user behaviors, and charge five dollars or more per thousand users. Lookery sells its data at 25 cents per thousand users — simple data sets that includes only age, gender, general location, and related keywords generated through searches that lead users to sites. Using “cookies,” or small snippets of code that collect data about web users, Lookery runs ads on its network for 25 other ad networks. It currently gets four billion impressions, web-wide.

So if a 27 year old male living in Mountain View, Calif. were to visit a political site, Lookery could help target a political ad that might be especially meaningful to him.

Unlike many ad-targeting technologies, Lookery isn’t a technology play, it’s economic war. “We think these lightweight profiles should be cheap and publicly available” for advertisers, says chief executive Scott Rafer. Lookery publishes the data it collects about other sites on its own site; if an ad network likes the basic data it sees, it can buy the more complete data sets from the company.

Right now, “advertisers can’t buy this data in volume,” he says. Some companies already have such data, of course, but they’re not selling it. For example, Google targets ads on MySpace using this data, but doesn’t share such data with other ad networks.

The company has a couple ways of gathering this data. It lets sites that want to learn more about their users install a snippet of Javascript code that records the information (check out the screenshots for Lookery data about the product review site ThisNext). Lookery is also buying data from other companies. 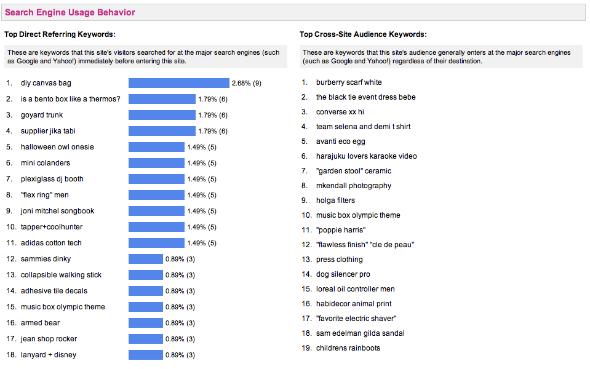 This doesn’t include Facebook user data, though, because Facebook doesn’t let third party ad networks target ads using its users’ information. Only third-party applications themselves can do that, and only with their own ads, not a network’s. Lookery instead imports the data it collects elsewhere to target ads inside Facebook. Large app developers like Slide have their own ad networks, and can target their own ads using that data; Lookery aims for smaller app developers who don’t have the resources to do so themselves.

So why did Lookery bother with Facebook in the first place? “We threw up that stupid banner network after nine days of work, realizing it was a bad business but that it would lead to the right place,” Rafer tells me. “We served up a lot of ads, got a lot of data, and saw where it led — it wasn’t until last October that we had a glimmering of a business plan.”

He says that the sales relationships the company now has with ad networks were a result of them using Lookery to run ads within Facebook. The Facebook ads themselves “make a little bit of money,” he adds. The company has “good” revenue so far, according to Rafer. As part of its plan to drive down the cost of profile data sales, the nine-person company is lean, using only web-based services to operate.

Regarding privacy: While some ad networks collect personally-identifiable information in order to target ads, Lookery chief executive Scott Rafer claims his company is “a bunch of privacy freaks,” and points out that all data is anonymized as part of the company’s terms of service. It doesn’t collect names, email, exact birth dates, or other information that violates privacy regulations in the U.S., the E.U. and in countries around the world.

The company already raised a first angel round of $1 million from prominent angel investors. In its latest $2.25 million round, it has re-upped from some of them, including Salesforce chief executive Marc Benioff. It has also raised funding from an investment group called ATTRACTOR, Sand Hill Road VCs who invested independently of their firms, and strategic investor Holtzbrinck, the German publisher that owns the German Facebook clone StudiVZ.