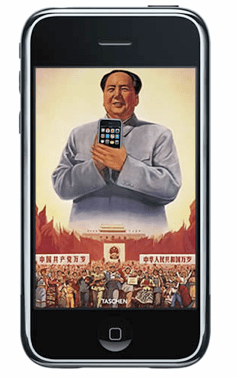 When I was in China last month, it seemed like every entrepreneur I met had an iPhone — an iPhone that they had purchased elsewhere then “unlocked” so they could use it in China. Unlocking means breaking Apple’s terms of service so that the phone can use a data card from a local carrier, which goes against Apple’s business strategy of trying to partner with local carriers and sell phones through them.

But finally, it looks like the iPhone may officially arrive in the country where the iPhone is made. Apple and the largest mobile carrier in China, China Mobile, have been making progress on a deal that would allow the carrier to distribute the phone, according to Marketwatch. The progress stems from Apple dropping its demand that China Mobile share revenue, the report says — Apple is presumably still getting a cut of phone hardware sales, but not a cut of revenue from related services.

I’m personally surprised that Apple caved on this. I’ve previously spoken with one Chinese entrepreneur who had been approached by Apple to help them work something out with China Mobile. He turned down the offer and told me that “I’d rather put a chainsaw down my pants than try to negotiate that deal.” Apple is notoriously rigid about maintaining control — it did this successfully with AT&T in the U.S.

Other mobile-focused entrepreneurs I’ve spoken with in China estimated that there are more than half a million unlocked iPhones in China. That seems like a lot, assuming the guesstimate is accurate, except that there are 540 million mobile users China. I guess the Chinese market was just too tempting.

Details are still being worked out, according to the report, with a senior China Mobile executive still not giving a timetable for the phone’s introduction.

Update: A bit more speculation about the iPhone in China.