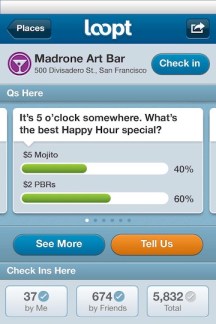 Loopt, an early leader in location-based services, today announced at Where 2.0 the launch of Qs, a new feature that allows users to answer questions and see other user’s responses in any physical business location.

Loopt is similar to other location-based check-in services in that it enables users to search and visit locations, check-in, and connect with others in a network. However, with the introduction of Qs, the company is taking an unique angle on getting users to provide location-based information.

According to a fairly old study sent by the company, there may exist a 90-9-1 rule for web and mobile content –- 90 percent of people consume content, 9 percent interact with content, and only 1 percent of users actually create the content. By creating an activity that’s as simple as answering a few straightforward questions, the company hopes to beat that the rule, not to mention its competitors like Foursquare and Gowalla. Loopt wants to convince users to publish useful information, which is then filtered into a stream, dubbed the “Radar,” that spotlights information in the user’s general area.

The company plans on releasing the new feature first in San Francisco and then roll out from city to city. The reasoning appears to be that a community team (area experts) needs to be created for placing relevant Qs (questions) at local places. In subsequent releases, Loopt plans on allowing users to create questions, according to company representatives.