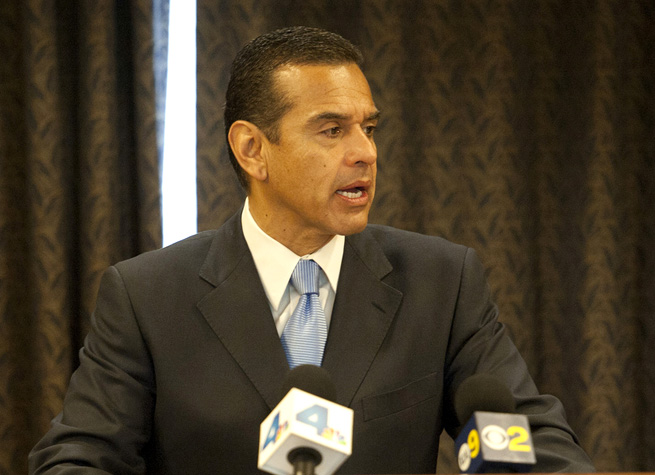 LOS ANGELES — With about six months left before his term ends, Los Angeles Mayor Antonio Villaraigosa is looking to cement his legacy as the man who catalyzed the city’s tech-and-venture-capital renaissance.

VentureBeat attended the Los Angeles Mayor’s Council On Innovation And Industry (LAMCII) year-end meeting, which took place Wednesday morning at the Rubicon Project’s West L.A. headquarters. The purpose of the event was to present the LAMCII’s initial findings and show off new ways to help L.A. grow.

Villaraigosa, who was recovering from a cold, opened the meeting with brief anecdotes about his 10-day trade mission to South America, and touted the potential of L.A. as an exportable brand and as an innovation-and-investment capital.

He said L.A. was an undervalued asset and cited data, such as Startup Genome’s Startup Ecosystem Report 2012, ranking L.A. as the third best city in the world for startups, and the fact that USC, UCLA, and Caltech have produced more Nobel laureates than any other three institutions combined.

The LAMCII’s presentation was segmented into six different categories, each addressed by a different council member: narrative, capital, policy, network, education, and comparative. Spoken like a true advertising executive, Wilshire Axon vice-chairman Jimmy O’Mahony talked about rewriting the “narrative” of L.A. and creating a new “perception,” which would allow the city to become a top-three contender in the “list of must-consider locations for talent, investors, businesses, and entrepreneurs.”

McCall also heralded L.A.’s record of serial entrepreneurship and emphasized its history of large exits, citing Yahoo, eBay, Rent.com, Shopzilla, MySpace, and Overture as examples. Serial entrepreneurship is an important metric for McCall because it indicates that startups are receiving high enough valuations for their founders to “exit,” or sell their companies, and use their new liquidity to reinvest in their native ecosystems, he said.

When asked how McCall would measure the success of the LAMCII’s initiatives, he said, “The heart of an ecosystem is serial entrepreneurs.” He also said that New World Ventures has architected a 20-year investment strategy for Los Angeles.

Jim McDermott, the co-founder of US Renewables Group, addressed policy and talked about the 15.1-mile Expo Light Rail Line, or “texpo” line, which is currently under construction. He said he believes it will help foster innovation by physically connecting more Angelenos. McDermott said 64,000 people will ride the Expo line daily and that bringing people closer together will inevitably nurture more communication, connectivity, and idea exchanges.

Additionally, McDermott said the Expo line initiative (the city is building seven light rail lines) will connect the western districts of the city to their eastern counterparts, spreading Silicon Beach-centered prosperity all over L.A., while leveraging USC’s and UCLA’s intellectual capital to create innovation hubs equipped with the latest technological and educational resources.

The LAMCII’s other policy proposals include: expanding the three-year extension for the exemption from gross-receipt taxes for new business, using earmarked federal grant money to create and retain jobs, and forming trade partnerships in South America and China, according to council documents.

At the conclusion of the event, we spoke with Mayor Villaraigosa as he was being escorted back to his car and asked him if he had a numerical target for the amount of venture capital investment he’d like to see.

“We haven’t done that, but that’s something we have to think about,” he said. “There’s no question in my mind that what they’ve done here is going to be the seed for a fairly dramatic growth in this sector here in L.A.”