Louis Vuitton and Riot Games announced they will collaborate on the League of Legends World Championship that kicks off October 2 and culminates in Paris on November 10.

For Riot, the partnership is a new high mark for esports sponsorships, as Louis Vuitton is a high-end luxury brand that is nonendemic for esports, meaning it normally doesn’t have anything to do with gaming. But Louis Vuitton specializes in creating trophy gear for sporting events, and so it is collaborating with Riot on a one-of-a-kind Trophy Travel Case to hold the Summoner’s Cup, which goes to the world champions in League of Legends. Louis Vuitton will also be a global partner for the League of Legends World Championship.

League of Legends has 8 million concurrent daily players, and the world championship is the biggest esports tournament in terms of viewership, said Riot Games head of esports Naz Aletaha in an interview with GamesBeat. Last year, 99.6 million people tuned in to watch the world championship.

“First and foremost, it is a testament to the growth and scale and relevance of League of Legends as the global leader in the esports industry,” Aletaha said. “Louis Vuitton has a history of being associated with some of the most prized or coveted trophies in the sports world, like the FIFA World Cup, where they also produce a trophy case. And so, for us, as we look to really elevate the most prestigious moment of our season, we thought that there was no better partner than Louis Vuitton. We think the coming together of the companies will be really great for the sport.”

Every year, Riot Games organizes the League of Legends World Championship for the planet’s best players and teams, which this year begins October 2 in Berlin for play-ins and group stages, continues in Madrid starting October 26 for the quarterfinals and semi-finals, and culminates with the final in Paris on November 10.

Louis Vuitton will create a bespoke trunk, the first of its kind for an esports championship, that features both traditional Louis Vuitton savoir-faire along
with cutting-edge, high-tech elements inspired by the League of Legends universe. 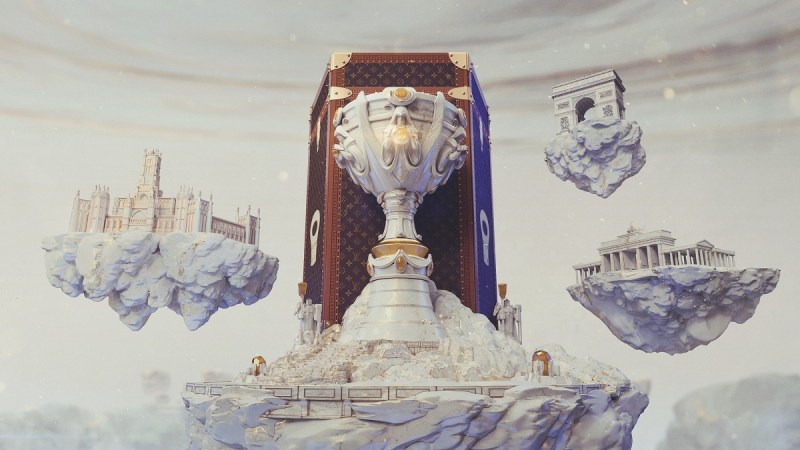 Above: League of Legends trophy case, created by Louis Vuitton

That’s pretty heady stuff for the young field of esports. League of Legends has been around for 10 years, and the world championship competition now boasts more than 100 professional esports teams with 800 pro players and millions of fans. Louis Vuitton has been around creating fashion and accessories since 1854.

Louis Vuitton will also have a major presence at next year’s world championship, when Riot Games goes back to China. The trophy trunk for League of Legends will be on display at the Eiffel Tower for a couple of days before the November 10 finals.

“That’s the first time the two world finalist teams will see it onstage as part of the opening ceremony,” Aletaha said. “What we find really exciting about Louis Vuitton is how iconic of a brand they are, how aspirational they are as a brand, and the fact that they’ve been, you know, this classic fashion house for over 160 years. And they’re able to really take tradition, and blend it with innovation.”

Aletaha said the audience is large, the fan base is engaged, and the size of esports compared to other entertainment is really appealing for brands like Louis Vuitton. MasterCard, State Farm, Dell/Alienware, and Nike are also big supporters of League of Legends.

The trophy for the World Championship itself, the Summoner’s Cup, is made by Thomas Lyte. As one of the foremost trophy makers in the world, he has produced trophies for prestigious sporting events such as the FA Cup, Six Nations Rugby, Australian Open, and more. Riot worked closely with Lyte to make sure that it captured the essence of League of Legends and that the sport’s highest prize had symbolism pulled from all aspects of League of Legends.