I heard Mayen tell his story at Rami Ismail’s #1ReasonToBe panel at the Game Developers Conference (GDC) in San Francisco. As he told that story, there wasn’t a dry eye in the audience. So, I met with Mayen on Friday and captured his story on video. He tells it so well, and I encourage you to watch the whole video.

Mayen was born during wartime. His parents were fleeing South Sudan, which managed to gain its independence as a country in 2011. They were attacked on the road, and the parents had to separate. Mayen was born on the way to the camp. He grew up there with no electricity. He was one of more than 2.5 million displaced by the civil war, which began in 1983. 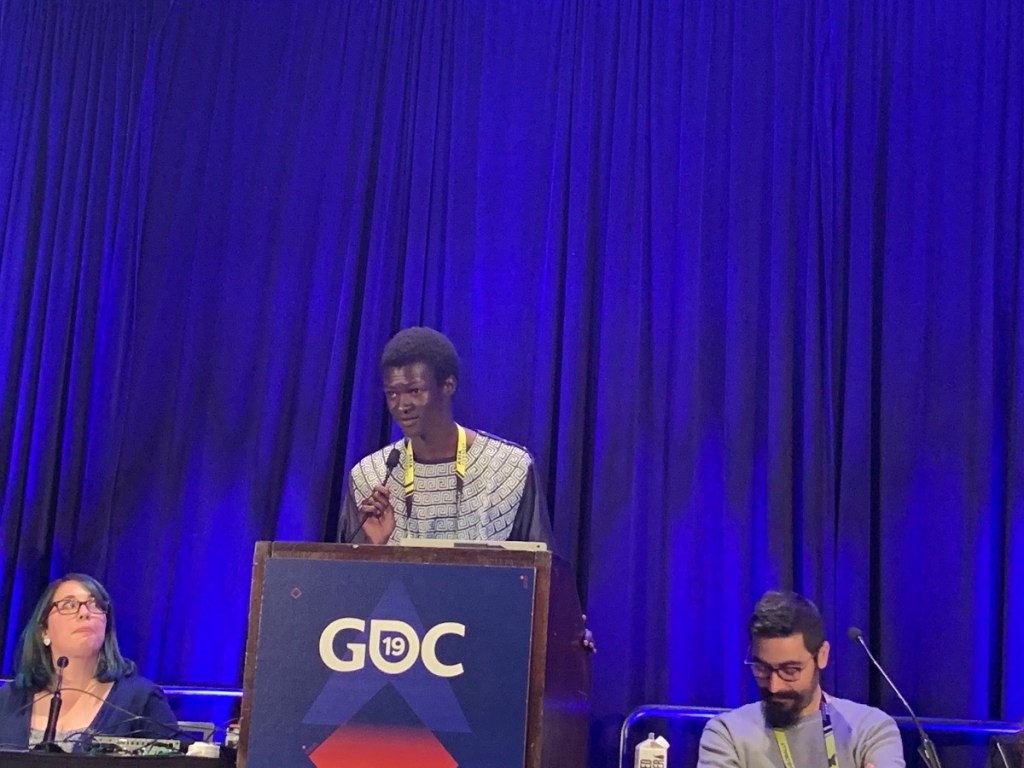 Above: Lual Mayen, maker of Salaam and Wahda.

A few years back, Mayen saw a laptop computer at a registration station for the refugee camp. He told his mother he wanted one. She saved money for three years to get the $300 to buy it for him. When she gave it to him in 2013, he burst into tears.

He took it to an internet cafe and used it. And he discovered Grand Theft Auto: Vice City and the joy of playing. He didn’t know how video games were made.

“I thought they fell from heaven,” he said.

It was a three-hour walk to get to the internet cafe, but he made the journey regularly just to charge his computer and play games.

But as a child born in a violent war, Mayen thought about how to create a game that could inspire peace. He taught himself to make games and formed his own company, Junub Games.

“I realized the power of gaming,” he said. “I realized games can be helpful for peace and conflict resolution. I started making a video game in my country, so video games can divert their minds from destructive activities.”

Above: Salaam, an Arabic word for peace, is a mobile game about that topic.

He created a game called Salaam (an Arabic word that means peace) about protecting communities from being destroyed. It was a 10-megabit mobile game, but he could only distribute it via Bluetooth networking. It spread in a viral way. A conference organizer at A Maze discovered it, tracked him down, and asked him to speak at a conference on games in South Africa.

There, Mayen met Ismail, cofounder of Vlambeer and a successful game developer. As an ambassador for indie game developers, Ismail encouraged Mayen to pursue his passion of making games. Mayen also made a board game, Wahda, that encourages peaceful conflict resolution. He did so because it does not require a computer to play, and so, refugees may have a chance to play it.

Last year, Mayen appeared at The Game Awards, where he was named a Global Gaming Citizen in conjunction with an award sponsored by Facebook. (27 million people watched that show.) Mayen is working with Facebook to publish Salaam as an Instant Game.

Mayen now lives in Washington, D.C., and he is also working with a small team on a virtual reality game. Oculus is working with him on that title. I would like to get him to speak at our GamesBeat Summit 2019 and hope a sponsor will pick up his travel costs.