Since its debut in 2006, Lytro has produced devices that leverage light-field technology, which captures information about the direction and intensity of light rays. Today, the company is applying this technology to the world of virtual reality with the unveiling of the Lytro Immerge, a cinematic camera for professional videographers.

Available for rent starting in the first quarter of 2016, this 360-degree sphere can be considered the Canon 5D MKIII for virtual reality. The camera has five layers, each containing a densely packed ring of cinematic video cameras that captures a high frame rate and resolution. It’s being called the first of its kind for the way it’s leveraging the light-field mathematical model Lytro is known for within the relatively new realm of virtual reality.

Company chief executive Jason Rosenthal told VentureBeat that the Immerge can provide what studios are looking for when they turn to virtual reality. “None of the existing 2D technology works with a 3D medium,” he said. “What we found post launch of the Illum, was filmmakers coming up to us and saying they couldn’t accomplish their craft without capturing the light-field. It’s an entirely different conversation than traditional photography.” 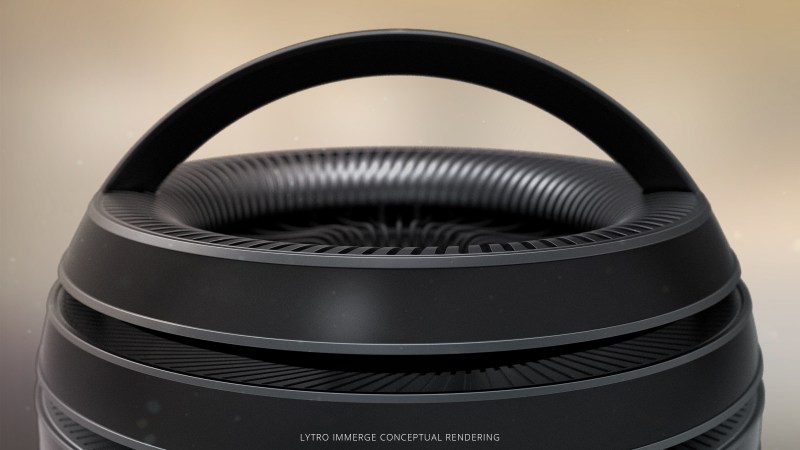 In order to deal with live action virtual reality, there were some challenges that Rosenthal’s team needed to account for. He said that there’s no sense of visual parallax (the perception of how an object is viewed along two different lines of sight). Current 360 spheres are artificially stitched together with 2D data which makes lines more noticeable and random. Essentially, according to Rosenthal, no one seems to have thought about all the different components needed to create a virtual reality system.

“No one has really thought about it from a system perspective — everyone is developing in isolation and most of the innovation has come from the headset makers,” Rosenthal said. “We’re the first company that has looked at this problem from the perspective of content creators.”

Although Immerge is billed as a camera, what videographers get is much more. In fact, it’s not a simple handheld device, but rather a pretty sizable sphere that can be mounted on a standard tripod. Components that come with it include Lytro-architected servers to store and process footage in real-time, and a light-field editor that’s like Adobe Lightroom for virtual reality — it’s a plugin for Premiere, Final Cut Pro, and Nuke and enables you to take all the camera views from Immerge and import them into your preferred editing tool.

Control of the Immerge device can be managed through a tablet connected through Wi-Fi.

“We believe the power of light field will help VR creators deliver on the promise of this new medium,” Rosenthal explained. “Lytro Immerge is an end-to-end light field solution that will provide all the hardware, software, and services required to capture, process, edit, and play back professional-grade cinematic content.”

Immerge is essentially offering a new way of developing virtual reality content. The company believes that its mathematical model will create immersive worlds that feel similar to being in the scene. The key is in processing natural light flow so that no matter which way you’re looking, standing, or moving, the movie has the optical qualities of real life.

The Lytro Immerge isn’t a product that just anyone can run out and buy, as it’s priced in the “hundreds of thousands of dollars,” so Lytro is offering it on a subscription rental program. Camera crews can borrow it and pay by the day, just as ,many studio crews currently rent their equipment. Rosenthal said that the company is still figuring out the specific per-day rate, but typically it’s about 2.5 percent of the system cost, which may equate to between $2,500 and $5,000.

Early launch partners for the Immerge include virtual reality studios like Felix & Paul, WEVR, and Vrse.