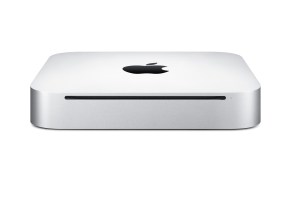 Apple’s attempts to build a living-room console for watching TV and movies has been one of the company’s conspicuous non-successes. Apple TV has sold a few million units, according to analysts, but that’s not Apple-scale success. CEO Steve Jobs has referred to it as a “hobby.”

On the other hand, Apple’s Mac mini, meant as an entry-level desktop computer, has become a popular TV console among Mac fans who feel most comfortable connecting a Mac to the living room TV.

Apple’s press release spells out the TV-readiness of the new Mini: An HDMI output jack for connecting directly to a big-screen television. An SD memory card slot for looking at photos and videos from a personal camera. Double the hardware graphics performance of the previous model (the graphics chip is now the same as that in Apple’s least expensive MacBook models.) Compact 1.4-inch high, 7.7-inch wide and deep body. Yet the slim box includes an integrated power supply, which removes the need for a giant power adapter to add to the clutter of a typical home entertainment system. The entry-level model has four gigabytes of memory standard, rather than the two in most low-end computers. That will reduce the amount of halting when using video-intensive applications. It’s more than powerful enough to double as a home server, another use case that Apple has picked up from customers.

One more thing, though: The Mini’s price has crept upwards from its original $499 in 2005 to $699 for the new model, which adds $100 to the previous model’s base price. Analyst firm Kaufman Bros. has dubbed the price “the only disappointment.”

The new price effectively repositions the Mac mini. In the age of netbooks and superphones, Apple has made a counterintuitive decision. Rather than remove hardware until it had a $299 computer, Apple has beefed up and redesigned the Mini as a fully-powered Mac for $300 less than its cheapest laptop.