The first generation of 3D video games are ugly. I think they are ugly in a charming way, but many people disagree with even that. The truth is that the Nintendo 64, PlayStation, and Saturn were like the Atari and Intellivision for 3D graphics. While modern technology has easily surpasses those hardware limitations, new processes may have a way to make those old games look slightly better. And it all comes down to neural networks and machine learning.

One of the big reasons a game like Final Fantasy VII looks so ugly today is because of its textures. These are the JPG images that developers paint on polygons so that a box looks like a wall of bricks instead. But when SquareSoft was trying to fit Final Fantasy VII on a handful of CDs, it squashed down the resolution of these assets and threw away the originals. And that posed a big problem for the prerendered background images in Final Fantasy VII.

Developers (and fan modders) have a lot of methods to improve the visuals of an old game. But nothing could make a 320-by-240 low-resolution CG background look better short of remaking them from scratch. That process is too time-consuming for fans to do for free. And Square Enix decided it was easier to just remake the game instead of doing so.

Machine learning to the rescue

This is where machine learning can make a difference. Fans are using a $100 piece of software called A.I. Gigapixel to improve the resolution of Final Fantasy VII’s backdrops. The program works through a process of deep learning. Developers feed the system an extremely high resolution of an image and a low-resolution version of the same picture. The A.I. Gigapixel team then programs its neural network to attempt to make adjustments to the image.

This process starts out random at first. But the machine knows that it wants to get a final image that looks more like the high-resolution original. So each time it runs its process it tries to build on what has worked before while throwing out what didn’t.

You may want to click on this image to see the details. The top is the original game, and the bottom is the fan remaster. 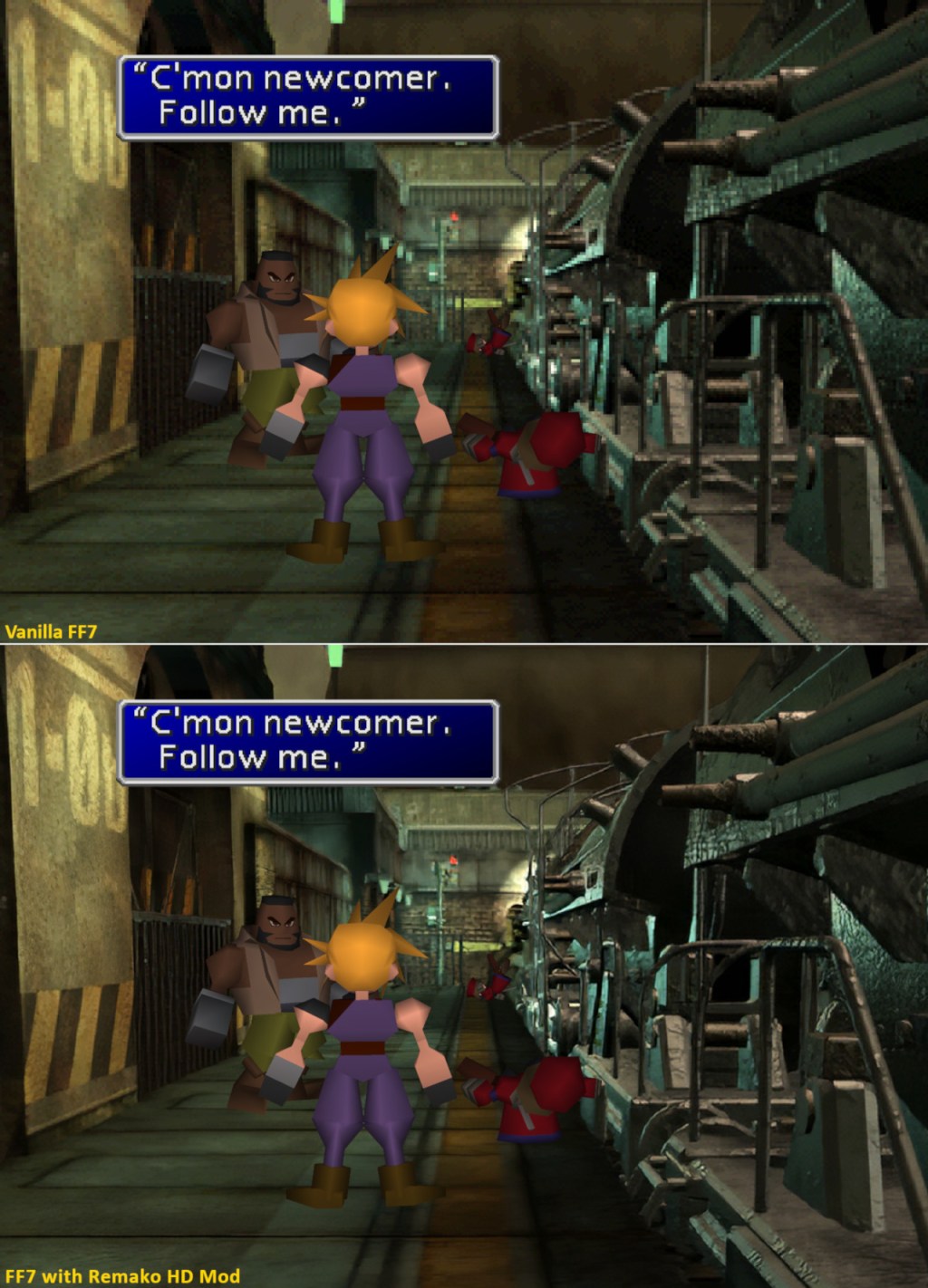 Above: Final Fantasy VII could end up looking great even on a 4K television.

The people working on this mod plan to release a playable version sometime before the end of January.

Why aren’t game publishers using this?

When fans removed Henry Cavill’s mustache from Justice League, it wasn’t shocking simply because it looked better. It was also notable because the software was able to run on a $500 consumer-grade PC.

And that makes me wonder — why aren’t more gaming companies using this technology? And the truth is that they are starting to. Nvidia has its own deep-learning super sampling feature in its RTX graphics cards. This is a visual effect that makes edges of characters and geometry in a game sharper while also running faster than equivalent methods.

But that’s not the only place that Nvidia is using deep learning. It is also applying a similar idea to that A.I. Gigabyte software to make Nintendo games look better.

The Legend of Zelda: Twilight Princess update for Nvidia Shield

The Nvidia Shield is one of the best Android set-top boxes that you can get. It’s great for watching movies and TV as well as playing retro games, but in China, it’s even better. That’s because Nvidia made a deal to bring first-party Wii games to the Shield there.

This is enabling Chinese Shield owners to play games like Punch-Out, Super Mario Galaxy, and New Super Mario Bros. Wii. But the Wii did not support HD resolutions, so those games can look slightly ugly on a modern 4K display.

Nvidia is doing something about that.

The company says it ran 4,400 textures from The Legend of Zelda: Twilight Princess through a machine-learning algorithm to improve quality. And just like with Final Fantasy VII, the results are stunning.

Nintendo released its own HD version of Twilight Princess, and the Shield version doesn’t look quite that good. The Wii U update has extra effects that improve the lighting with bloom and other techniques. But compared to the original Shield release the updated one with the texture update looks much better.

Now, let’s just hope that this technology catches on with publishers and developers.

I have a wishlist of games that I think could really benefit from a neural-network-powered makeover. Someone get Sega to get Panzer Dragoon Saga on PC with this. Nintendo and Square could even run Super Mario RPG through an upscaling machine.