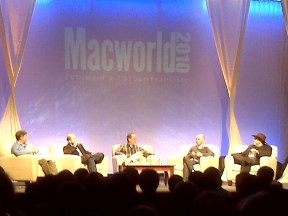 This year’s annual Macworld conference is missing a key component: Apple. The company — very likely Steve Jobs himself — decided last year that they weren’t getting enough out of Macworld.

This year, Macworld bravely carried on without an Apple booth or a Steve Jobs “One more thing …” keynote. With Apple nowhere to be found at San Francisco’s Moscone Center, there’s a new-Apple-gadget buzz missing from the show.

But in another way, Macworld has opened up. Daddy Steve Jobs and Mommy Apple PR are gone. Let’s party!

On Saturday afternoon, Macworld editor Jason Snell brought out four serious Mac geeks to talk about the iPad tablet computer, despite the fact there were no iPads in the room, nor anywhere else at Macworld. Macworld editor Dan Moren, Mac Observer and Macfixit writer Ted Landau, GDGT co-founder and Engadget veteran Ryan Block, and roaming columnist for Macworld and the Chicago Sun-Times Andy Ihnatko discussed their expected plusses, minuses, and ultimate uses for Apple’s tablet.

Attendees packed the event’s 1,500-seat auditorium, with an estimated 100-200 more in line outside the room, unable to get in.

Instead of real iPads, the panel handled cardboard mockups. Conference emcee Paul Kent flung one, Frisbee-style, into the audience to warm up the crowd. He also promised a free iPad to the attendee who ended up holding a large green beachball the crowd had bobbled while waiting for the show to start.

Panelists dove right into praising and panning the iPad. Ihnatko, who like everyone except Landau had handled a real one at Apple’s launch event, said the iPad stands out from previous Windows-based tablets because of its build quality. “You can tell you’re handling a premium product,” he said. “The device itself disappears after the first five seconds. You feel like you’re interacting directly with the mail app.” This has one potential downside, he said: You might stop paying attention and drop the thing. “I think a lot of people will go down to Walmart or Home Depot and get that grippy tape to put on the back.”

Landau said, “I think the majority of people who are happy with a laptop today will be happy with an iPad in three to four years,” because developers will conjure up apps we haven’t thought of yet.

“Will I be able to use it as a phone?” Moren asked. “Or a camera?” Landau added.

Panelists criticized Apple without restraint for the company’s closed, intractable approval process for apps. Landau spun a funny parable in which he tries to use his Cuisinart toaster oven as a space heater on a cold day. Cuisinart customer support tells him his extension cord doesn’t say “Made for Cuisinart,” so it won’t work. And the Pop-Tarts in his pantry won’t toast, because they weren’t purchased from Cuisinart’s online store. And in fact, the terms of use document that came with the toaster forbid even trying to use it as a heater.

“I tried to tell a friend about this, but he was totally unsupportive,” Landau joked. “He’s kind of a Cuisinart fanboy. ‘They’re just looking out for your best interest,’ he told me, ‘And those Pop-Tarts really aren’t good for you anyway.'” That, Landau concluded, is how it feels to struggle with Apple’s app store.

Snell argued that he likes the app store because the apps almost always work flawlessly and don’t break his iPhone. “Why not an app store for the Mac?” he asked.

The toughest topic for panelists was the iPad’s use as a reader for electronic books, newspapers and magazines. Block said the iPad reaffirmed his Kindle, a much better dedicated device for reading entire books on a computer screen. “I can see a day when the Kindle is free,” Snell said, as a means of bringing customers into Amazon’s e-book embrace. Block agreed that a cheaper Kindle would sell a lot more books.

Snell concluded that it was too soon to forecast the iPad’s success, or even its modes of operation, for books. “iBooks was obviously a work in progresss,” he said of the book-reading app Steve Jobs demonstrated at the iPad’s launch event in January. “I think there’ll be fifteen different ways to read a book” on the iPad, he said.

Ihnatko blamed the Internet for making it hard for publishers to go digital. The Net, he said, treats expensive, hard-won, tightly written and thoroughly fact-checked investigative journalism as equivalent in value to quickie blog posts. Internet users have been trained to believe that all content should be free.

Ihnatko thinks digital rights management tools will be a boon to publishers, just as they were to music and movie companies. Once people find it’s easy to buy the New York Times or a novel online, he said, they won’t mind paying a small price for much better content than what they can get for free.

But publishers, like Hollywood, he concluded, will need to come to accept lower prices for each individual item online before they can really dive in and deliver the superior content for which iPad toters will pay.

For a blow-by-blow report on the event, see TUAW’s liveblog post.