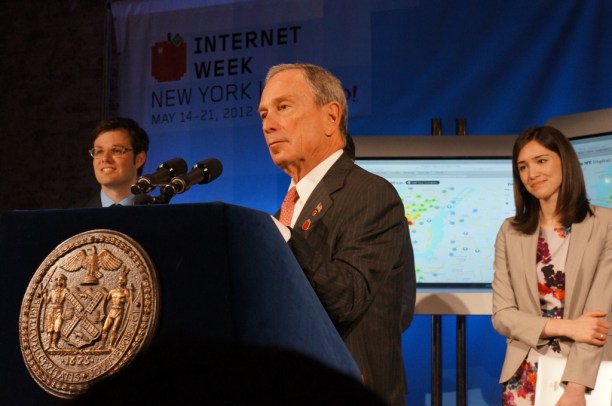 If there’s a significant week-long event occurring in New York City, you can bet that Mayor Michael Bloomberg will make a showing at some point. So it was no surprise when I got a call last night about a mysterious Bloomberg press conference scheduled for this morning at Internet Week New York.

At the event’s swanky SoHo headquarters, Bloomberg announced a new online map — the Made in New York Digital Map — that makes it easy to find the city’s tech startups and job opportunities. Given that new NYC startups and incubators are seemingly popping up every day, the map will be a useful way to make sense of everything tech going on in the city. And it looks to be a killer tool for landing a startup gig.

“Creative people want to be around other creative people,” Bloomberg said. “Creativity is driving the tech industry,” just as it is fashion, entertainment, and other industries in the city.

From the map’s site: “The Made in NY Digital Map is a visual testament to the vibrant state of New York’s digital industry – showing a powerful constellation of over 600 homegrown startups, investors and coworking spaces across the five boroughs. Browse by neighborhood, review job postings, or add your own startup to the digital landscape – the Made in NY Map is a living resource that reflects New York City’s dynamic innovation ecosystem.”

“The message is loud and clear: that New York is open for business,” said NYC’s Chief Digital Officer Rachel Sterne.

Bloomberg pointed to the map as one way to encourage more engineers to come to New York City. That will also become less of a problem once NYC’s new tech schools are up and running in a few years. Cornell and Technion are working on building a tech school in Roosevelt Island, and NYU is targeting a new tech campus in downtown Brooklyn.

The brains behind Internet Week New York created the Made in New York map in conjunction with the Mayor’s Office of Media and Entertainment (which will be updating it moving forward) and the NYC Economic Development Corporation. Sterne credits Commissioner Katherine Oliver with coming up for the original map idea.