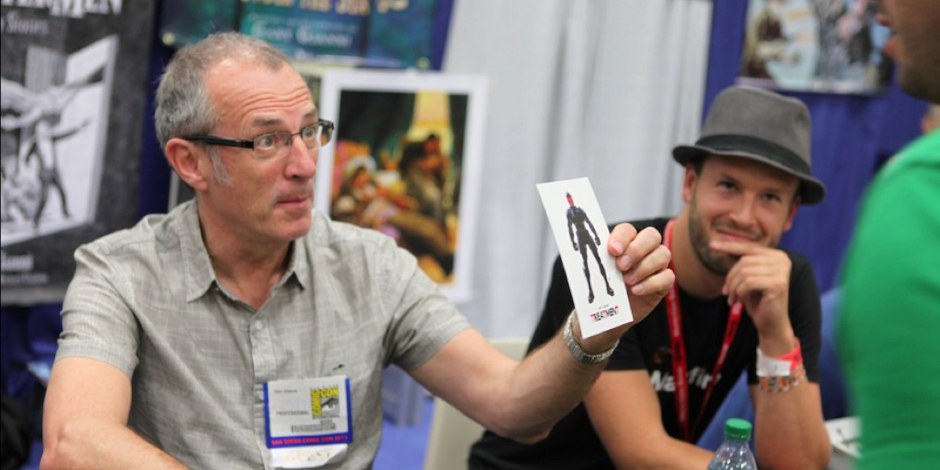 Any knowledgeable fan of graphic fiction will tell you that Americans are responsible for making comic books popular, but it was a handful of Brits in the ’80s and ’90s that demonstrated their full potential as a storytelling medium. And if history is any indication, the same thing may happen in digital comics, thanks to newly launched iPad app Madefire.

Madefire is a digital comic app that features original content developed specifically for a tablet device. Madefire comic books — which the startup calls “motion books” — take full advantage of the iPad’s gyroscope, accelerometer, and touch screen hardware. Pages of a Motion Book can contain illustrated characters or objects that move slightly when you jiggle or tilt the device. Panels can unfold in a visual sequence not possible in print, as can the word balloons, captions, and illustrated effects (e.g. smoke, explosions, etc.). Madefire even gives creators the option of adding various sounds from a vast library of audio clips, which is a huge departure from how digital comics are typically imagined.

“These Motion Books aren’t cartoons or movies that you can sit back and watch,” Madefire co-founder Ben Wolstenholme told VentureBeat in an interview. “We’re focused on creating stories that are very much a reading experience but with new elements that can add depth to that story.”

So the motion books won’t contain any continuously animated elements, which Wolstenholme and co-founder Liam Sharp tell me is more to clear up confusion people might have when navigating through the story.

And as for the navigation, it’s pretty straightforward. You touch the right side of the screen to advance the sequence (or “turn the page”), while touching the left side of the screen takes you backwards through the comic. A tiny red arrow pops up on the right whenever a sequence has ended, prompting you to touch the screen, and a translucent icon appears in the center whenever there’s a page with motion sensitive artwork. Pressing near the bottom or top of the screen for a short period brings up a page-by-page navigation for easily jumping to a specific portion of the story.

The company is initially releasing seven new motion book titles by some very notable creators in the comic book industry, including Robbie Morrison (The Authority, 2000AD), Mike Carey (The Unwritten, Hellblazer), David Kendall, and the legendary Dave Gibbons (Watchmen). Both Wolstenholme and Sharp are also among the story creators. Having reviewed all the titles, I found Sharp’s and Christina McCormack’s Captain Stone is Missing… to be the gem in the bunch, displaying both an interesting story and a wonderful example of what motion books can do. Some of the creators, including Madefire’s founders, will be on hand at this year’s San Diego Comic-Con International (booths #4902/4904 if you’re in attendance).

New issues (called episodes) come out every two weeks, which readers can be alerted to by turning on the Madefire app’s notifications. The titles are currently free, but in the future, creators will have the option of setting their own price per episode via an in-app purchase. The startup plans to generate revenue by taking a cut from future motion book sales as well as licensing out its technology to others.

Why digital comics should ‘move’

Wolstenholme, along with co-founders Sharp and engineer Eugene Walden, said they noticed that the majority of digital comic books available on tablets aren’t much different from the traditional printed versions.

“We’ve created a platform that puts the tablet screen experience at the forefront,” Wolstenholme told me while driving down to Comic-Con earlier this week. Right now, the process involves a writer, artist, and “director,” who adjusts various things to make the story’s flow optimized. Wolstenholme explained that as people become more familiar with the Madefire creation tools — which mimic layers in Photoshop — the title of “director” will morph into “editor”.

And while Wolstenholme praises publishers for the influx of digital content available for sale, he and the Madefire team realized the huge opportunity being missed — both in terms of innovative storytelling possibilities and business potential.

But that doesn’t change the fact that you’re still forced to pinch and zoom within a page because it’s too small to read on its own. ComiXology, iVerse’s Comics+, Graphicly, and Panelfly all have a “guided-view” feature that lets you tap the screen to zoom in on an individual panel, and automatically displays a zoomed in view of the following panels with each subsequent tap. I’ll admit this is a useful feature for the iPad screen (and even more-so for mobile phones), but I absolutely hate it. When you use this feature, you aren’t reading a 22-page comic book — you’re reading a digital comic with over a hundred panels. If you adapted this guided-view experience to print, you’d have a 100-page comic book and really broken story pacing.

By contrast, Madefire focuses on keeping a comic book page “whole,” which requires creators to think in terms of “sequences” rather than a simple panel-by-panel narrative.

“The process starts with pencils and paper, but then moves on for the added dynamics,” said Liam Sharp, who in addition to founding Madefire, has also drawn comics for several decades.

Madefire’s founders aren’t the only ones who see that potential, either. The startup has raised a $2 million round of funding led by True Ventures and has pulled together an all-star lineup of advisers from the web publishing world, including Flipboard founder and CEO Mike McCue, former Apple SVP of Applications Sina Tamaddon, and Automattic CEO Toni Schneider. The company’s Motion Book creator technology is free to all creators, and the company hopes to offer a crop of books created via its app — first for free and later a paid option. Creators have the ability to set their own prices via in-app purchases. Madefire plans to make money by taking a cut of  motion book sales and by licensing its technology to other publishers.

The startup is making its motion book creation tools available for free on its website and promises to add new books on an ongoing basis. For those of you who can’t made it down to San Diego this weekend, check out the Madefire demo video below.