VentureBeat: As far as who’s going to use this, how much do you think that the applications you’ve first announced here are going after general purpose or consumers or enterprise users?

Abovitz: We see two really big markets. I’ll call them creatives and businesses. Creatives could be anything from game developers, artists, musicians, filmmakers, theater companies, actors, directors, media, broadcasters. We have a bunch of that activity going on behind the scenes. We see that group coming forward and wanting to reinvent media. It gives them an awesome creative space to play.

Then we see businesses being much earlier adopters than we thought. Magic Leap will likely be a dual track company, maybe for the rest of its life. We’ll have a creative and consumer component, and then I also see strategic business partnerships being an important part of where we go. That’s really just being attentive to who’s shown up and who’s asked things. If you’re a business with a particular use case, you can drill in and do things with Magic Leap One that you can’t do with any other device. We’re actively at work with companies behind the scenes, helping them solve fundamental business problems with spatial computing. That’s been very exciting. I think, along the year, you’ll hear more about those stories. 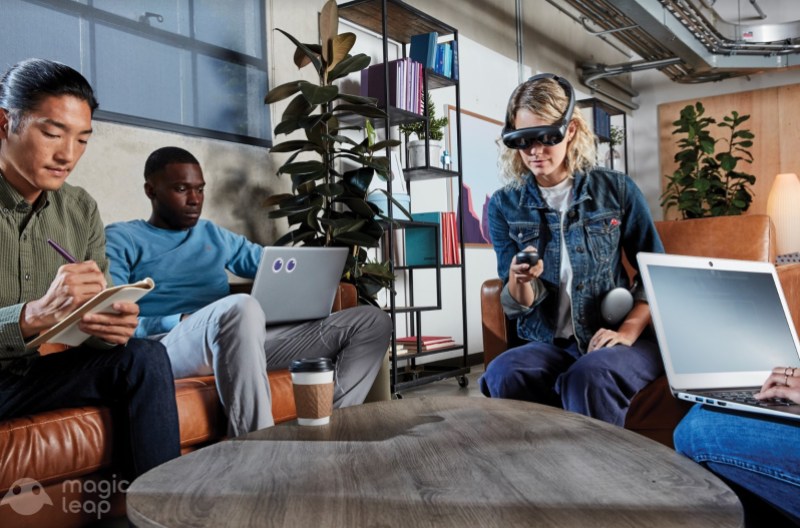 Above: Magic Leap has a 4:3 aspect ratio.

If you look at what we’re shipping, as far as things that kick people off, you have Magic Kit, which is a bunch of samples for developers, a bunch of “Hello World” things. If you’re familiar with Autodesk, you get your Hello World teapot, your Hello World this and that, so you learn how to build. We have a bunch of those kinds of things. We’ll keep pushing out more Hello World tools.

In our SDK, we have something called Screens, which is really a framework for media broadcasting, whether it’s 2D or volumetric. People in media can see all the different ways to do things in spatial computing as a framework to create in. Our Helio spatial browser is super easy for people to work in. There’s no end of web developers who can teach themselves how to make amazing scale — pop-up store-sized things, building-sized things on the web. They can lock that to the world and suddenly see how the whole spatial web is going to look like. That’s very exciting. We have people pioneering here. The Helio browser is really an application tool framework for people to build. Again, that’s where we’re very creator-focused.

We have some other examples. Create teaches you the possibilities of spatial computing in a fun way instantly. It’s the first thing anyone downloads after unboxing. It’s really meant to stimulate what could happen. It’s like your first Lego set. It’s not meant to be the last thing. It’s meant to stimulate everybody as they think about what’s possible. In a few months, you’ll be able to download the full Dr. G’s Invaders. That’ll be a full triple-A style game. We’ve been showcasing that for people here. The Weta team will have a launch date for that. It’s completely amazing.

Then there’s Tónandi, which is a rich visual music experience. It really pushes the boundaries of — it almost feels like you’re in a movie world come to life with sound spirits. There was a little sample we showed people at the end of last year. When you actually get this thing now, it’s pretty intense. Some people have fallen in love with it.

It’s just showing the possibilities. It’s not like this is your full productivity suite. That’s why this is a creator’s edition. It’s meant to spark ideas, to provide tools to support people as they build. We have a stable platform. We’re going to be updating and releasing new things to the community really fast. Over the next six months and over the next year, it’s about making our system as stable and as easy to use as possible for creators. That’s the way we think about it.

VentureBeat: How do you feel about pushing your people to engineer the future, and then also waiting for Moore’s law to advance?

Abovitz: We’re on a good curve with CPU and GPU. We have a plot of what the next decade looks like. We also have a plot of what we call Magic Leap Infinity, our ultimate system. We’ve been mapping out not just CPU and GPU, but machine learning, deep learning, and AI. We have a sense of where that’s going. It’s super exciting. Some of the best people in the world are here and at our partners. We’re understanding 5G networks, and also how far we can push our photonics chip.

We’re not just riding one curve as a company. We’re riding the deep learning and AI curve. We’re riding our own photonics chip curve, which is trying to match human physiology. The curve around 5G networking: When is high-speed indoor/outdoor communication going to be all over major cities in the U.S. and the rest of the world? We plot that out and we know each increment where we’re going to be. We want to be on the leading edge of each step.

It’s going to be completely amazing to people, what happens every 12 to 24 months going forward. Moore’s law converging with other factors is going to make computing incredibly interesting. We might be in for the most rich and entertaining next 10 years in computing everywhere. 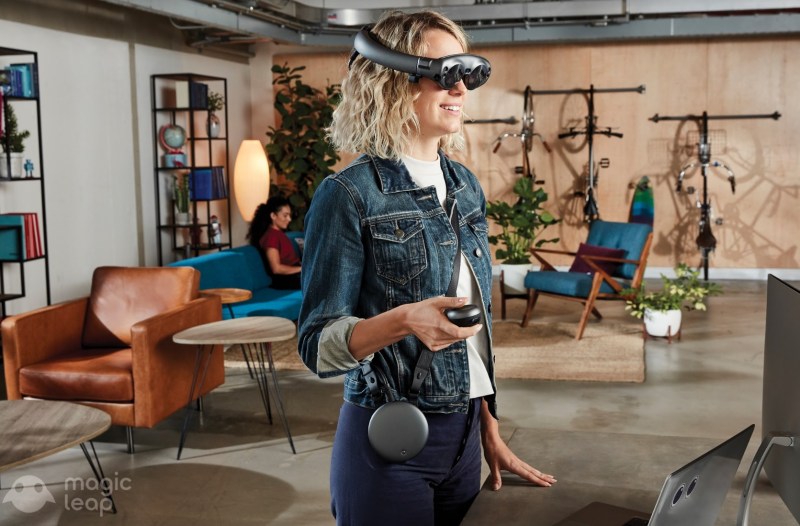 VentureBeat: How did you decide on the six-city limited release rollout?

Abovitz: My theme for the company is, “Learn how to swim.” We’re a little baby taking its first steps. You look at the big companies you cover, they’ve been doing this for 40 or 50 years. We’re like a PC company in the mid-’70s. We decided to start with six major cities to take our first steps, but we’ll be rolling out in many dozens over the next few months.

We’ll increase as we get comfortable and as we see — it’s not just the computer, not just Magic Leap One. Our whole supply chain operation, the way we do customer service, we want to make sure all of that’s going well. We want to make everyone happy. When we feel like we’re doing a good job of that, we’ll scale up faster and faster. But we don’t want to get ahead of our skis in terms of our ability to make people to happy. We’ll listen to customer feedback, to developers, to creators. That takes a bit of time and patience. We’re patient. That’s part of why we raised so much capital. It’s so we can do the right thing.

VentureBeat: What do you think about the beginning of the Wired article, the comments on the hype cycle Magic Leap has gone through? Has that been good or bad for the company, do you think?

Abovitz: It was a big culture shock for me, coming from a successful med tech company that most of the larger tech world doesn’t really care about. We were doing robots, but we were just in the med tech sector. Starting this thing in my garage, just working at it quietly — when we got our Google investment, that was a big bang.

Once we got that, the hype cycle was out of our control. People said, “What is this little Florida company doing?” When they found out we were doing this cinematic reality — it all just seemed completely outlandish. It was a wild ride. A lot of it had nothing to do with us. It’s just the chaos of people looking at us — I think of the monolith from 2001. They were projecting everything they wanted onto the company.

We were also trying to send up what I call smoke signals to developers and other people who were genuinely interested in what we’re doing. You try to communicate through the noise. We ended up having to communicate a bit more behind the scenes, because we wanted to just woodshed and build our thing.

It was a bit of a learning situation. But I wouldn’t change anything about how we got here. It’s all about looking forward. [laughs] It’ll make a great movie one day, maybe.