I’ve played Angry Birds many times before but never like this.

Rovio Entertainment and Resolution Games showed off a demo of their upcoming mixed reality (MR, or augmented reality, AR, if you prefer) game for Magic Leap One Creator Edition.

For the first time, I tried out the Magic Leap headset, playing Angry Birds FPS: First Person Slingshot, in a demo in San Francisco. The Angry Birds game plays just like any other version of the title that originally came out in 2009 and has accumulated 4 billion downloads since. But this game adds a see-through augmented reality effect and 3D spatial gameplay. You can place the virtual fortresses of the green pigs on a real-world table and then walk around it, viewing it from 360 degrees.

“It becomes very intuitive to understand because you control the camera with your hand,” said Tommy Palm, CEO of Resolution Games, in an interview with GamesBeat.

Sami Ronkainen, creative director at Rovio, added in an interview, “The original game is based on a physics model, which is a natural fit with this. It is very similar to the original, with the added gameplay of three dimensions. It’s not only a tech demo. It’s fun to play.”

I’d agree with that.

You can take your time when you aim. You squeeze the trigger to pull the slingshot back. The bird in the slingshot will look back at you. In front of you, as you look through the Magic Leap goggles, you’ll see the virtual game superimposed on the real world. When the blocks fall, they take into account the landscape and physics of the real world. So most of the blocks will fall down onto the real table, but a few will fall off the edge to the floor of your own home.

Resolution Games has also built other virtual reality and augmented reality games such as the fishing game Bait!, Bait! Arctic Open, Wonderglade, Narrows, and Solitaire Jester. But this is the first game that the team built on Magic Leap, which debuted its Creator Edition in August for $2,295. It’s pricey, but it’s probably one of the most coveted tech devices around the world right now. 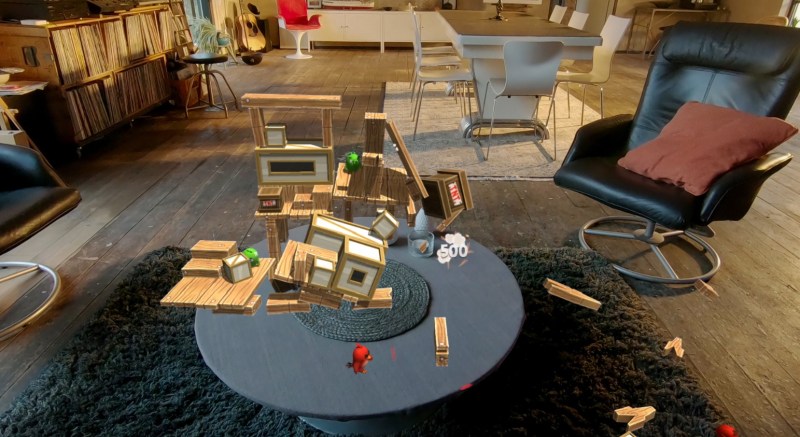 “It has been an incredible experience bringing Rovio’s massively successful and beloved entertainment franchise to mixed reality,” said Palm. “Developing for the Magic Leap platform was a very unique and inspiring process for our team, and we’re confident fans will love how the game is brought to life.”

I felt a little like that as I pulled the slingshot back and let it go, causing occasional mighty crashes that Palm and Ronkainen could hear as they watched me play. When I had a question for them, I could simply look up and ask, and I could see them through the glasses, even as I continued to see the virtual Angry Birds game in front of me. 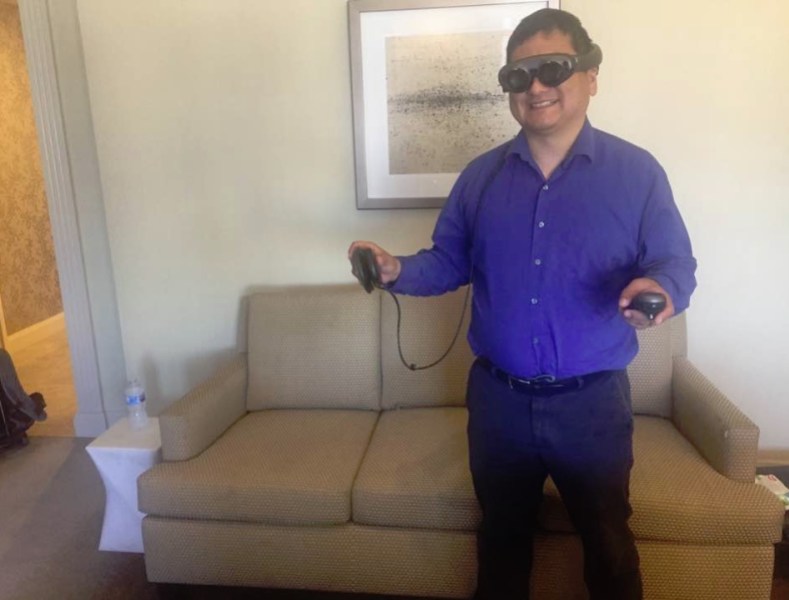 “One of the things we had to think about when we created this game was how to make people understand that they can view the level from different angles,” Ronkainen said, in an interview. “They tend to stick to one position when they start playing. So we built the levels with pieces that stick out like dominoes, and then you can see that you can view them better from another side.”

Sometimes, when I made a bad shot, the pigs would snicker and mock me. But once in a while, I would shoot at one object, knock it down, and then trigger an unintentional collapse of the entire structure. When my companions heard that big crash, they knew that I had made a good shot and yelled some encouragement.

“You’re not so isolated in augmented reality as you would be in virtual reality,” Ronkainen said. 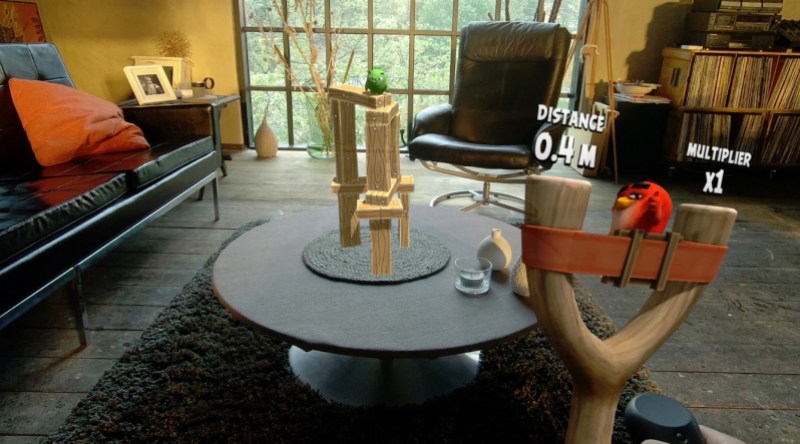 Above: You can see the slingshot obscures things that are behind it.

Rovio and Resolution Games are anticipating a fall 2018 release for Angry Birds FPS: First Person Slingshot. The game will be available for free, as it is meant to show off exactly what the Magic Leap goggles can do. Magic Leap will show it off again at its Magic Leap conference in Los Angeles on October 9-10. The Resolution Games and Rovio crew have been working on the game since January. They had early versions of the headsets but were able to get a headstart by building in VR, Palm said.

I played for less than half an hour, as I got through as many of the 20 levels as I could. It was a simpler version of Angry Birds, with the basic red birds for most tasks, yellow birds for taking out wood, and blue birds for taking out ice pillars. If I squeezed the trigger while the yellow birds were in flight, they would speed up and smash into the target with greater force. The blue birds would split into three projectiles if you squeeze the trigger in mid-flight.

The Magic Leap device got a little warm, and I had to pull it out and restart it once, since the computing puck can overheat in your pocket. I wanted to play all the levels, but I ran out of time.

Ronkainen said it’s not clear how many more levels the companies will build, as the launch details are still being worked out.