I got a sneak peek at the Magic Leap One Creator Edition, thanks to a demo of the new mixed reality version of Angry Birds.

Magic Leap says owning these augmented reality glasses (Magic Leap calls it mixed reality) will be like living in the future ahead of everyone else. But at $2,295 each, the early adopters will be taking a leap of faith that the applications will be there to make the investment in the device pay off. Magic Leap will show more of the interface and applications at the Magic Leap Developers conference in Los Angeles on October 9-October 10. For now, we had a short demo of a single app with a working headset.

As I described in my preview of the Angry Birds FPS: First Person Slingshot game (from Rovio Entertainment and Resolution Games), the Magic Leap goggles can superimpose a layer of virtual animations on the real world. When you look through the glasses, you can see a three-dimensional pig’s fortress in animated form. It can sit on a surface like a coffee table.

“It’s an exciting device and it was fun to work on this project,” said Tommy Palm, the CEO of Resolution Games, which built the Angry Birds game in collaboration with Rovio, in an interview with GamesBeat.

The headset can do “occlusion” well. That means that virtual objects can obstruct the view of the real world objects behind them.  As you can see in the embedded video, you can see that a slingshot will obscure items behind it, or the pig fortresses will obscure the view of the real things behind it. The gameplay is interesting because the fortress is in 3D, and, while wearing the glasses, you can walk around it, 360 degrees, and see the animation from every angle.

However, there are some problems with the experience. If you notice, the little pig can cast a shadow to the side of it, enhancing the realism of the animation. But the animated pig fortress itself does not. The video reveals that the big fortress casts no shadow at all, and I found in my demo that this is true even if you walk around the whole perimeter. That doesn’t matter for Angry Birds, which is cartoony, but it does matter for more realistic images where the artist is really trying to superimpose an augmented reality layer on the real world in what is called mixed reality.

Also, at the moment, Angry Birds FPS: First Person Slingshot is a single-player experience. You may be chuckling and expressing yourself, but there’s no way for your friends to see what’s happening on the screen. Right now, I don’t know if it will be possible to stream from the device so that others can see it on a TV, as the representatives from Resolution Games and Rovio didn’t know. The lack of multiplayer at the outset isn’t going to doom the headset, but Magic Leap better jump on multiplayer or spectating as soon as it can — or explain how long it’s going to take to deliver it.

And if you haven’t heard yet, you won’t be able to use your expensive headset outdoors. The Magic Leap Lightwear headset is meant for indoor usage only. You can’t use it while you’re on the run, except when you are inside a building.

On the plus side, I didn’t feel isolated. I could see my companions around me as they were watching me play. I could see the real world around me, along with the animations. They couldn’t see what I saw, but they could hear the fortresses crashing and could hear if I made a good shot or not. In that respect, it’s far different from virtual reality, where you feel cut off from the outside world.

The device has about three hours of battery life. The handheld controller has one button and a trigger, and the headset has a touch-sensitive touchpad. The device has six-degrees of freedom positional and orientation tracking.

The Lightwear headset comes with a Lightpack, which is like two hockey pucks glued to each other. I was told to hang the Lightpack on my pocket, so half of it was in my pocket and half was outside of it. I put it inside, and in a short time, my pocket got warm. The device crashed once, presumably because it got too hot in my pocket. So I had to pull it out. 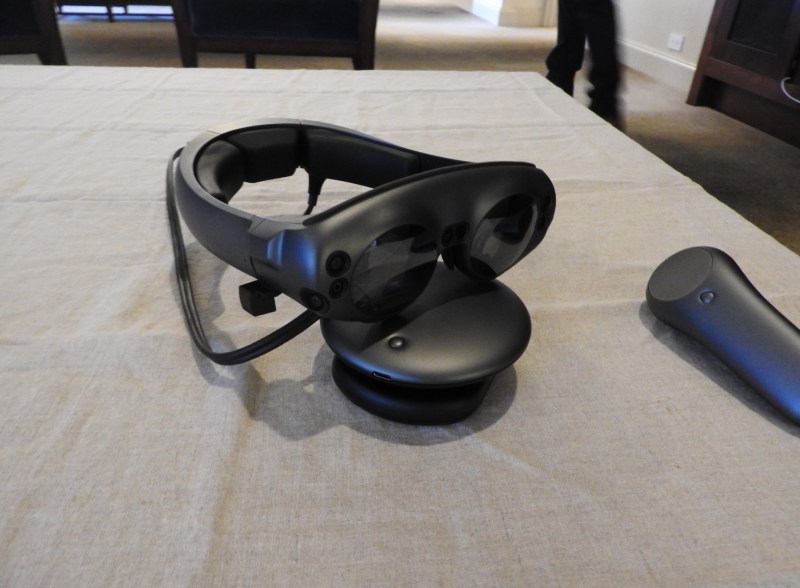 Above: Magic Leap One Creator Edition up close.

The Lightpack has a Nvidia Tegra central processing unit (CPU), dubbed Parker System-on-chip, (SoC). It has two Denver 2.0 64-bit cores, four ARM Cortex A57 cores, and 256 CUDA graphics processing unit (GPU) cores. It has 8GB of main memory and 128GB of storage, with 95 of that available for applications.

The headset has onboard speakers with 3.5 millimeter jack with audio spatialization processing. It has Bluetooth 4.2 and WiFi 802.11ac/b/g/n. And it charges with a 45-watt USB-C power charger.