High-flying augmented reality startup Magic Leap is trying to raise $500 million at a $6 billion valuation, according to a report in Bloomberg.

The Florida startup has already raised $1.3 billion to fund its AR glasses, which have been the subject of much speculation because they can reportedly create very high-quality animations over the real world. Magic Leap has been working on its wearable device for years, and it appears the company needs more money to complete its ambitious project.

Citing unnamed sources, Bloomberg reported that Temasek Holdings, an investment company owned in part by the Singapore government, is considering participating in the new financing round. If that’s true, it’s another sign that Asian investment companies are interested in acquiring Western technologies in the AR, virtual reality, and gaming markets. We’ve asked Magic Leap for comment but haven’t heard anything.

Magic Leap has already drawn investments from Alibaba Group Holding, Qualcomm, and Google. (Google CEO Sundar Pichai is on Magic Leap’s board.) The previous round reportedly valued the company at $4.5 billion. 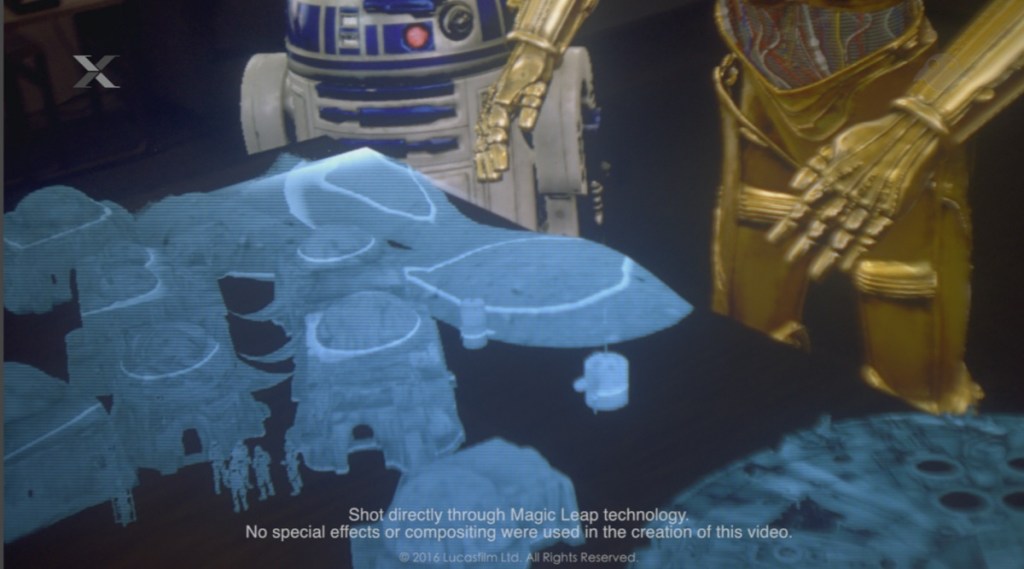 Above: Magic Leap and Lucasfilm have an alliance.

Bloomberg said that the latest investment round hasn’t closed and added that Magic Leap hopes to ship a device in the next six months. That headset will reportedly cost $1,500 to $2,000 and be bigger than a pair of glasses and smaller than other VR headsets, such as Facebook’s Oculus Rift. Magic Leap’s device would also require users to carry a puck-like device that would provide processing and information to the glasses.

Magic Leap has raised a lot of money for AR since 2014 — more money than just about every other AR company combined. But the tech company started getting negative news in publications such as The Information in December 2016, when doubts rose about whether Magic Leap could accomplish what it had set out to do. The task is huge because Magic Leap, which has more than 1,000 employees, has to make its own hardware, software, and initial content. The company is reportedly using a type of light-field technology to superimpose 3D imagery on the real world.

The company’s large financing needs and the long gestation of its product are due, in part, to the ambitious scope of its goal: to develop its own hardware and software, along with the costly electronic components required for the device. Magic Leap is being closely watched by just about everybody in the gaming industry because of its potential to create a new gaming platform.