Magic Leap has come out of hiding. After several years of rumors and $1.9 billion in funding, the Florida company unveiled its Magic Leap One AR goggles for the first time.

Magic Leap said its “creator edition” will be available in early 2018 with a software development kit (SDK) that will enable developers to get started on applications. The goggles are attached by a wire to a disc-shaped external computer dubbed a Lightpack, which you hang on your belt and carry around with you. It also has a handheld controller that resembles a touch-sensitive remote control. The puck and the headset do not have to be connected to a desktop computer for processing.

The glasses are definitely oversized, which confirms the concerns that Magic Leap is trying to pack an awful lot of groundbreaking technology into a small form factor. But Magic Leap has defied skeptics who believed the company would not be able to get this far because of the technical challenges in cramming a lot of optical and computing technology into a small accessory. The company offered no price for the headset, which it described as a “mixed reality” device.

CEO Rony Abovitz said in a brief interview with GamesBeat that the Magic Leap One goggles will be both for developers and enthusiast consumers who will be able to create their own applications on top of Magic Leap, so the consumers will have access to the same version as developers. He also said that the goggles are optimized for indoor viewing.

“We call Magic Leap One a creator edition because I think there is a sea change in what is a creator and what is a consumer,” Abovitz said. “You are not just a passive consumer of stuff. You will see a blend of most people where a lot of people become co-creators in some way. It inspires you to be part creator, part consumer. That is the blend for us for all time. We think every person has creative potential.”

The device can receive a variety of inputs via voice, gesture, head position, and eye-tracking. It places persistent digital objects on the physical environment around you, which is akin to blending animated overlays on the real world in a way that it’s hard to tell them apart. If you place a “virtual TV on the wall over your fireplace and when you return later, the TV will be right where you left it,” Magic Leap said.

Magic Leap hosted Rolling Stone’s Glixel at its headquarters in Fort Lauderdale, Florida, and Glixel interviewed Abovitz extensively. The article said Magic Leap will have two different sizes of goggles, with optional pads around your nose, forehead, and temple. In the images, Magic Leap only shows that the device is used in an indoor setting. That might limit its usefulness and the breadth of applications that will be possible.

“It was a powerful experience, which showed how a theme park could craft rides with no walls or waits,” wrote Brian Crecente in the Glixel article. “Most importantly, it took place among the set-dressing of the stage, the real world props that cluttered the ground and walls around me and while it didn’t look indistinguishable from reality, it was close. To see the physical world around me, and then those creations appearing not on it, as if some sort of animated sticker, but in it, was startling.” 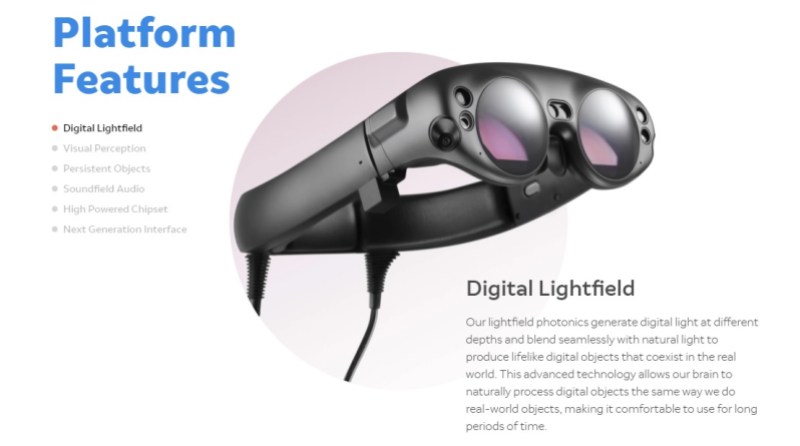 Above: Magic Leap One

The basic tech is built around a digital lightfield, or “photonics that generate digital light at different depths and blend seamlessly with natural light to produce lifelike digital objects that coexist in the real world.” The tech allows the brain to naturally process digital objects the same way it does real-world objects, making it more comfortable to wear the headset for long periods of time. The tech is different from Microsoft’s approach to its HoloLens mixed reality glasses, and it is interactive.

Abovitz said the Lightpack puck has similar computing power to a MacBook Pro or an Alienware gaming PC, with a dedicated graphics card. A low-powered computer in the goggles handles data coming in from the sensors. The puck handles most of the processing, and it reportedly has an Nvidia Tegra chip in it, according to my own source. Crecente described the headset as light.

“At a high level, we decided to minimize weight on your head as much as possible and we wanted to maximize compute power,” Abovitz told me. “We came up with an architecture with a maxed out CPU/GPU that you could actually put in your pocket and we have a real-time vision processing with some AI machine learning in the headset. We have a distributed computing architecture. One does real-time, one does application processing. It was a deliberate design decision.”

The device has four built-in microphones and six external cameras. It has built-in speakers, and Crecente said they produced positional sound, so that the sound of a whirring robot came from a particular direction.

The article had no information on battery life or power consumption. The article said Magic Leap was on its ninth generation of hardware prototypes. Abovitz told me that the company wants the next generation to be wireless, in terms of how the puck connects to the headset. But the current headset uses a wire to ensure the smooth processing of data.

“We are optimizing for indoor first,” he said to me. “We wanted to get indoor with home places and work places. We work really fast internally at developing tech. We want developers and creators to soak it up how it’s part of life. It’s safe to start with indoor spaces and work your way outdoors. We are also looking from a computer vision perspective as doing something as sophisticated self-driving cars need to do. They don’t all work well in winter and sleet and fog. Outdoor is something you can work up to. I believe we can get there in our gen 2 timeframe. We are giving people a lot to play with.”

Above: Magic Leap will have a game being developed by a game division of Weta.

The demo showed a human character that Crecente said was like an Apple Siri, except in the flesh. She could talk, make eye contact, and show a variety of emotions. Magic Leap can capture human images and live performances of actors and then drop them into the system as animated characters. The site also describes social sharing experiences, sandbox toy creations in your living room, pulling the “web out of the screen,” and partnerships to be announced later.

Glixel said the first game being created by Weta’s Weta Gameshop (the special effects studio behind The Lord of the Rings movies) is designed around the universe of Dr. Grordbort. About 55 people are working in that division, headed by Greg Broadmore, Richard Taylor, and Tania Rodger. They have been working on it for about five years. It is a first-person sci-fi shooter in the robot world of Dr. Grordbort.

“Great games transport us to different worlds. But, what happens when games live in ours? Now, gameplay and characters finally come to you. Where will you take them?,” the company said on its website.

Abovitz founded Magic Leap in 2011, and he funded it for its first four years from proceeds from the $1.65 billion sale of Mako Surgical, a company that designed surgery-assisting robot arms.

It surprised everyone in 2015 when news surfaced that Google had given it $500 million in funding. Magic Leap’s investors include Temasek, Tencent, Alibaba Group Holding, Qualcomm, and Google. They’ve given the company enough money to be valued at around $6 billion. The company has raised more money than just about all of the other companies in the AR industry, and it has more than 1,000 employees working on hardware, software, and content. The creator edition will likely be available to early adopter consumers as well as developers, and that should generate revenues and time for the company to create a better consumer version.

All of it is in service of the idea of leaving reality behind.