Wizards of the Coast and Amazon’s livestreaming subsidiary today announced that they’ll work together to broadcast 36 Magic: The Gathering Pro Tour competitions and other organized-play events this year. That’s up from 22 last year, providing what Wizards (which also publishes the world’s biggest tabletop role-playing game, Dungeons & Dragons) estimates is an additional 300 hours of expert-level card playing. Wizards is doing this in part to celebrate the two decades of pro play for one of the first big trading card games on the market — and to help expose more people to its flagship product played at the highest level.

Magic debuted 21 years ago, turning trading cards games into a hobby powerhouse. The new broadcast deal will see Twitch air four Pro Tours, the Magic World Championship, the World Magic Cup, the Magic Online Championship, and 28 Grand Prix events from North America, Europe, Japan, and Brazil (which will be in English for the first time). The coverage will roll out in two languages for now: English and Japanese (Magic has a thriving scene in Japan). This also includes coverage of the first Pro Tour Team Series, which has nearly 30 teams signed up. 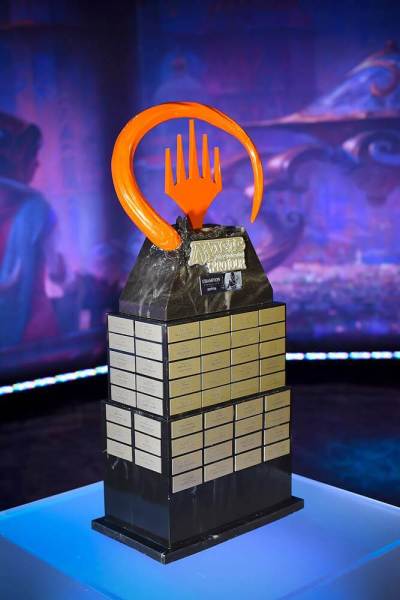 “We want fans to participate and live the dream highest level of competition,” Maigc: The Gathering director of global organized play Helene Bergeot said over the phone. “We’ve had good luck dealing with Twitch over the years.”

In the past, Wizards says that viewership ranges between 500,000 and 1 million people for Pro Tour Events. As Magic is a global game, Bergeot said that a next step would see Wizards looking into other languages for broadcasts.

Wizards and Twitch are also working on subscriptions. The Magic channel is launching subscriptions now, and subscribers will get six emoticons, special badges, and better access to chat. Wizards promises more benefits will roll out later, including behind-the-scenes material on the research and development of Magic and community features.

Bergeot and Wizards is well aware of the hazards that come with using Twitch — trolls infest the livestreaming platform’s chat, and last year, racists took it over when Terrence “TerrenceM” Miller was competing for the championship at 2016’s DreamHack Hearthstone event in Austin, Texas. Twitch has since added tools to fight bigots, and Wizards will work to keep trolls and other malcontents at a minimum. Wizards said it’ll have a full team of moderators.

“We all agree that very hard to police chat,” Bergeot said. “We want to partner to work together to make Twitch a nice place people want to interact — part of online community, striving to do that.”

Bergeot and Wizards also confirmed that Magic is interested in doing a similar “So you think you can cast” project as Blizzard Entertainment did for its Hearthstone card game, where the community auditions for possible caster roles for livestreaming events. “We’re interested in the evolution of streaming in general,” Bergeot said. “Involving the community is really important for us.”

Wizards also said that would be keeping an eye on how things work out with Magic and Twitch and use anything it learns for its considerable slate of D&D broadcasts as well. “We are definitely looking at partnership from all angles and open to looking into more ways that we can work hand-in-hand with Twitch for all our properties,” a Wizards spokesperson said. “Definitely our first step for upping our game across the company.”