Magic, the provider of on-demand personal assistants, will begin charging you to use its service. VentureBeat has learned that the company is offering two payment plans: $100 per hour or $3,000 per month — depending on usage, which means that instead of a “use it or lose it” policy, the service will only charge subscribers based on the number of minutes that are actually used.

On New Year’s Eve, Vungle cofounder Jack Smith posted a tweet indicating that Magic would begin charging new users. Since then, we’ve noticed that Magic has updated its website with an amendment to the Frequently Asked Questions section. Under the question, “How much does it cost?” the answer (as of December 16) read:

It’s completely free to chat with Magic. When you order something, we’ll let you know the total price so you can confirm it before you are billed. There are no hidden fees, and tip is included.

However, a scan of the same page today shows a revision to that copy:

You only pay for the time our Magicians spend on a request. When you order something, we’ll let you know the total price so you can confirm it before you are billed. There are no hidden fees, no markup on your purchases, and tip is included.

Although Magic CEO Mike Chen declined to discuss specifics about the change, he did tell us that the announcements we saw were two versions from an A/B test, and confirmed that the prices will go into effect tomorrow. 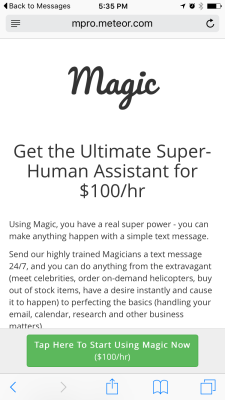 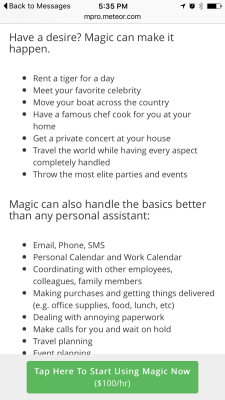 As mentioned earlier, there are two pricing options available. With the default option, which costs $100 per hour, you pay only for the minutes that you use. The service is available 24 hours a day, 7 days a week and you’ll get a response within seconds to minutes. If you’re a power user and opt for the $3,000-per-month plan, you’ll be allotted 40 hours of service during that time period (the first 10 hours are free). The premium plan also provides 24-hour support to users. (Service charges are in addition to the cost you’ll incur for the goods you receive, of course.) 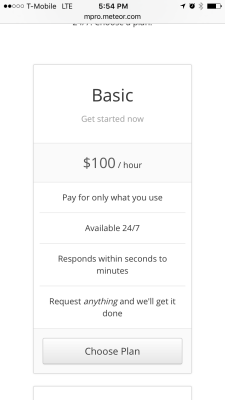 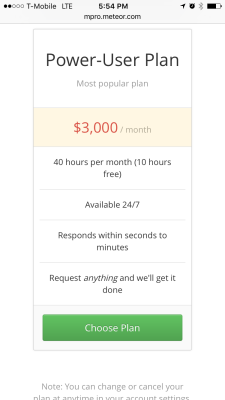 Magic made its debut in 2015, in the early days of personal assistants. It followed along with the likes of Zirtual and came about before Facebook M, Operator, and other virtual services designed to help you accomplish the many tasks you encounter during your busy day. Magic connects you with a real person, however, promising to provide you with “the ultimate super-human assistant” when you text in your request.

Magic bills itself as a true personal assistant, and claims to do more than just help you buy something from Target or pick up your dry cleaning — you can have the “Magician” coordinate meetings, plan travel arrangements, answer your calls, or have things delivered. The service can also take care of more complicated requests, like arranging to have a famous chef cook in your home, or moving your boat across the country.

All of these services were free  … until now.

Why is Magic choosing this moment to begin charging, and at a rate of $100 per hour? The company declined to comment, but if we had to hazard a guess, it’s probably to deal with potential independent contractor issues that have plagued the likes of Zirtual, Uber, and others. To date, the company has raised $120,000 in seed funding from Y Combinator and also reportedly raised $12 million for its Series A, in a round led by Sequoia.

Update as of Monday 8:13pm PT: This post has been updated to reflect that Magic had sought to raise a $12 million Series A funding round.

Update as of Tuesday 9:47am PT: Magic has officially announced that the aforementioned fees are part of a premium service called Magic+. Company CEO Mike Chen told us that the original version of Magic is still available and “operates on a pay-per-request model.” The claimed benefit of using the premium service is that it offers you a dedicated team “of specially trained magicians and advanced software that will get to know you and your specific needs to integrate fully with your life.”