Mahalo founder Jason Calacanis hails this new development as “social search” — a type of search that ranks results based on the collective input of humans instead of machines alone. Calacanis says he will succeed, even as a number of other attempts at social search have failed: including Eurekster, which started out as a social search engine, but changed its approach when it didn’t catch on; Wink met a similar fate, moved into people search, and returned some of the money it had raised; not to mention Yahoo, which started as a human-led directory, but abandoned that approach as well, in favor of a Google-like algorithmic search.

However, big question marks remain for Mahalo. The new feature is like standard social bookmarking tool, allowing users to submit links they think are relevant to a specific search term. The system sends the link to the curator in charge of managing the results for that term. If the curator agrees that the link is a good one, they add it to the results page under a section labeled “recommended links.” See image below. Users who generate accepted links earn trust, and their links count for more over time, and users who submit spam get banned (Calacanis is clearly hoping to duplicate Wikipedia’s success in this regard).

However, what happens if the curators have thousands of links to sift through? How can this model possibly scale? Calacanis says that the trust ratings will solve at least part of this issue, but he acknowledges that there are still a few things to be worked out.

The move comes at a time when Mahalo is trying to raise $20 million.  [Update: We’ve removed a previous reference to a third-party anonymous source who had commented on Mahalo’s business. We’re seeking extra confirmation about this, and will update as appropriate]. 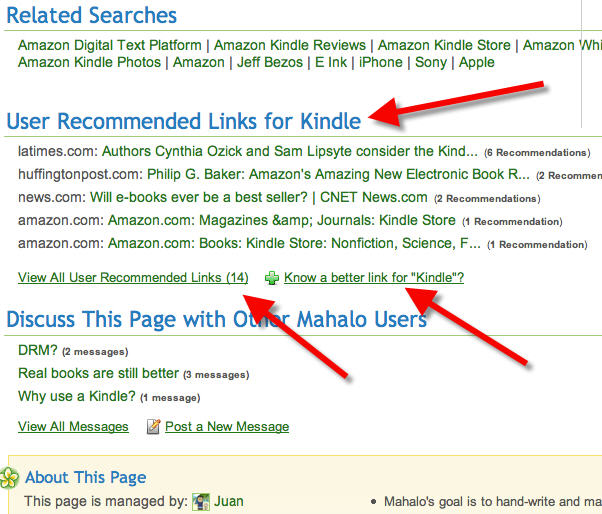