On Tuesday evening, I drew a monocle on VentureBeat founder Matt Marshall. But this was no ordinary monocle, because the Adobe software I used to create it was running on servers 3,000 miles away and piped directly to my web browser.

This Photoshop demo offered a sneak peek at the technology Mainframe2 will unveil when it emerges from stealth mode this week at DEMO 2013. At the conference Wednesday, the startup will discuss its ambitious cloud computing offering, which promises to run any Windows application and transport it to HTML5-enabled web browsers anywhere in the world.

Like many young cloud companies, Mainframe2 has a grand vision: It hopes to make science and engineering applications available to every Internet-connected person, no matter how graphically demanding the app or tenuous the network connection.

“Software has become a cornerstone of our civilization and the most important tool that we have,” Mainframe2 founder and CEO Nikola Bozinovic told VentureBeat in a conversation Tuesday. “But we don’t have an easy way to put software tools into the hands of the next billion people, and that’s the best chance we have to spur innovation and move us all forward.”

Mainframe2 supports native Windows applications, so software vendors don’t need to rebuild or port their apps to run them on Mainframe2’s servers. Instead, they log into a self-service portal and install them much like they would on a single computer. Mainframe2 handles everything else, from orchestration and deployment to geographical scaling.

And the whole process only takes about 10 minutes, claims Bozinovic.

Mainframe2 enables “developers to move [their apps] to the cloud almost instantly,” he said. “It’s dramatically easier than trying to do it with conventional solutions, like [those offered by] Citrix and VMware.”

To deliver software to users’ web browsers, Mainframe2 runs the apps in its data centers then converts each frame to H.264 video, using the latest encoding tech from Nvidia, Intel, and AMD. Its proprietary networking and HTML5 technologies are said to ensure high performance without the need for plugins like Java or Flash. 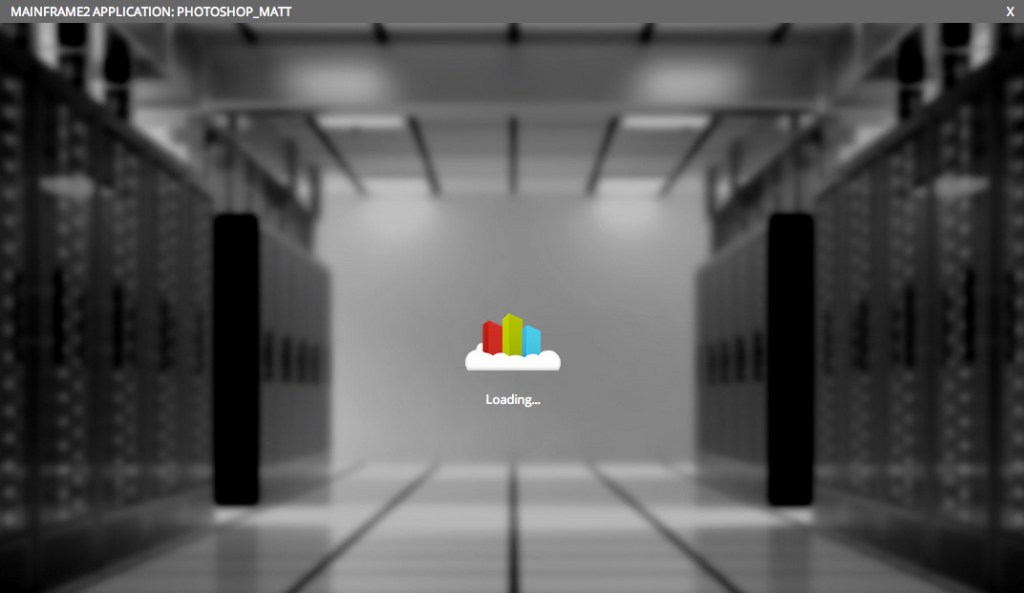 Above: The Mainframe2 demo took just a few seconds to boot up

There was some latency when I tested the Photoshop demo — nothing too bad, but the 100-millisecond delay destroyed the illusion of local computing. But I’m in New York, so if the data center hosting the application was on the East Coast, my photo-editing experience would have been much smoother — in theory, at least.

I asked fellow VentureBeat reporter Meghan Kelly, based on the West Coast, to try out the demo, and she seemed to have more serious issues.

“It felt slow,” she said after giving it a whirl in the Bay Area. “When I used the paintbrush, the color was definitely following my cursor and not keeping up with it. But that wasn’t the only issue I had with it. When I tried to draw a mustache on Matt, it drew it on his shoulder, not under his nose.”

It’s worth noting we tested a prerelease demo of an unfinished product. Right now, Mainframe2’s only operational data centers are on the West Coast, but it plans to switch on servers “worldwide” when the product launches in the fourth quarter. The company declined to provide more specific location details, but promised latency won’t be an issue at launch.

“The same way you can check Gmail or play Angry Birds anywhere, you can now use the best tools on any device, even if it only runs in the browser,” he said.

Although Mainframe2 can theoretically run any Windows app, Bozinovic intends to stay away from cloud gaming, which is an increasingly crowded market with tougher monetization margins. He declined to discuss Mainframe2 pricing details beyond pointing to an upcoming press release, which says the service will offer “on-demand pricing.”

Founded in summer 2012, Mainframe2 is based in Menlo Park, Calif., and currently has 10 full-time employees. It raised a seed round this spring with participation from Columbus Nova Technology Partners, Plug and Play Tech Center, and a few Silicon Valley-based angel investors.