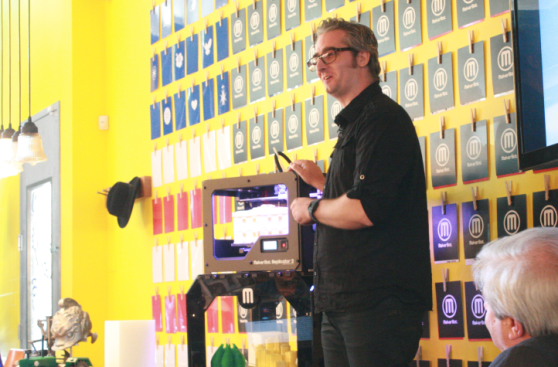 Since 2009, MakerBot has become one of the central pillars of the consumer 3D printing world. And now, bigger companies could be looking to buy it.

The Brooklyn-based company has been in acquisition talks with unnamed suitors, sources tell the Wall Street Journal.

A MakerBot spokesperson told us the company does not comment on rumors and speculation.

While a deal is far from certain, sources say that the talks emerged as MakerBot was trying to raise a funding round valued at $300 million. The company’s last round came in 2011, when it raised $10 million thanks in part to Foundry Group and Amazon CEO Jeff Bezos.

Since then, Makerbot has grown quickly, increasing its footprint and establishing itself as one of the most significant 3D printing companies in the industry. In October, CEO Bre Pettis appeared the cover of Wired, and earlier this week, Makerbot announced that it was expanding its factory and hiring more staff.

But while MakerBot would obviously be an attractive acquisition target for larger 3D printing companies like Statasys and 3DSystems, it’s unlikely that Pettis, who owns a large part of the company, will sell it any time soon. Pettis has created a company in an industry that’s ripe for tremendous growth, and it’s just  too early for the founder to cash out. It’s far more likely that Pettis will take more funding and keep building the company rather than sell it. At least for now.