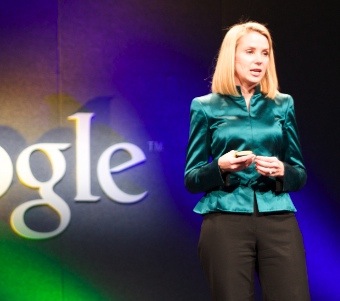 “Our social strategy is to help users connect with each other,” said Mayer (who’s pictured above at a different event).

Okay, that’s not exactly revelatory. Perhaps the most interesting thing about Mayer’s response was her statement that Google is still “just getting started,” even though it has already rolled out social products like Google +1, which allows users to recommend search results to their friends. So we can probably expect a number of new social products in the near future.

Battelle also wondered whether Google might start using social data from Facebook. Mayer responded that the results of that kind of partnership would be “very interesting.” However, she said that she feels “skepticism” about whether it will ever happen, because Google’s relationship with Facebook hit a bump last year. The problem was that Google allowed users to import their Gmail contact information into Facebook, but Facebook didn’t allow a similar swap — so Google decided to block contact sharing in the other direction too.

“We said, ‘We still would like to be open,’” Mayer said. “Let’s be open if there’s reciprocity. And there was no reciprocity.”

And Google doesn’t seem to be letting this go. The company tried to increase the pressure on Facebook earlier this year by preventing Nexus S owners from seeing Facebook Contacts in their Android address book.

Before taking on her new role last fall, Mayer led Google’s search efforts, so Battelle also asked her about the recent news that Google’s new chief executive Larry Page has renamed the search group the knowledge group. Mayer said the name change was another way to communicate the bigger vision that Google has for search. Many users still think of search as typing a query into a box and getting a list of links, but Mayer said Google wants to “reimagine search as something that’s much more expansive” while staying true to the core idea of “how can you find and explore information?”

And Mayer touched on how Page is performing as the new CEO — there haven’t been any big changes.

“Larry’s very focused on technology and on products,” Mayer said. “I think this really brings that to the forefront.”