When Marissa Mayer, Google’s 20th employee and one of its sharpest VPs, was appointed CEO of Yahoo a year ago, many folks wondered aloud if she could succeed in giving Yahoo the kick in the ass it needed to make a comeback.

By all accounts, Mayer has done that and more. Whether it’s improved stock performance, high-profile acquisitions, revamped applications, focusing on things that matter, or improving morale, she has been successful.

So successful that she’s arguably become the best Yahoo CEO ever. Yes, better than Tim Koogle, Terry Semel, and Yahoo co-founder Jerry Yang. Miles better than Carol Bartz and Scott Thompson. Mayer has been fighting hard to bring the company back to relevancy rather than keeping it on the same track.

And she deserves a lot of credit for that.

When Mayer took the reigns a year ago, Yahoo’s stock wasn’t looking pretty. The price had stagnated for several years, floating between $13 and $18 a share. Now Yahoo’s stock price is up 74 percent year over year and sits higher than $26 a share. Wall Street has generally been pleased with Mayer’s moves as of Yahoo’s second quarter earnings in April. (Third quarter earnings will be announced today.)

Mayer can’t take all of the credit for the stock increase. Part of Yahoo’s financial success stems from the company’s agreement to sell back half of its stake in Chinese e-commerce site Alibaba in a $7.6 billion deal. Mayer pulled the trigger to sell the stake, but Yahoo’s initial investment in Alibaba happened in 2005. She ended up pleasing shareholders by buying back stock with most of the Alibaba money, which improved Yahoo’s earnings per share. (And Yahoo still has a 24 percent stake in Alibaba it can sell later.)

Even though she can’t take credit for Yahoo’s financial position, her decisions have propelled Yahoo forward, and she was in charge while the stock quickly rose.

Check out the following comparison chart to see Mayer’s first-year performance versus the first year of other notable CEOs. 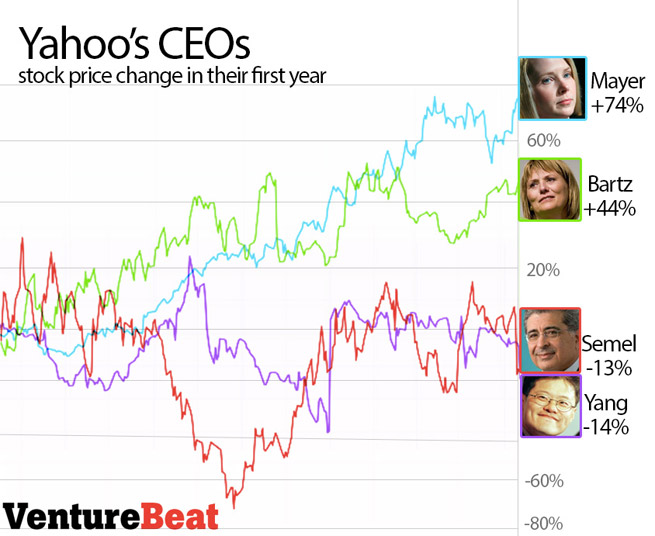 Another big thing Mayer has focused on is purchasing companies, shutting them down, and bringing their talent into the fold. You could almost call Mayer the “queen of acqui-hires” based on the number of companies she’s bought and shut down.

To date, Mayer is responsible for 17 out of the 83 mergers and acquisitions in Yahoo’s history, or more than 20 percent. That’s a lot of buys.

The list of companies she’s purchased includes both tiny startups and high-profile companies. Here’s what Mayer picked up and whether the app was shut down:

This is quite a list, and Mayer clearly picked up a lot of young talent in the process. This group of engineers and founders could help spur big new ideas inside Yahoo and make its existing mobile apps better.

The biggest acquisition in Mayer’s first year was the $1.1 billion purchase of Tumblr, a massive platform for blogging and sharing content. Mayer has pledged to keep Tumblr an independent entity, and employees at Tumblr will not work side by side with Yahoos.

“When we look at superscale acquisitions like eBay, PayPal, Google, YouTube, a meme arises,” Mayer said at a May event. “Those companies have so much momentum and they often do better when operated independently. Learning from that history is why we made the commitment to operate Tumblr independently.”

Of course, Yahoo will give Tumblr the resources it needs to eventually monetize and generate more than a measly $13 million per year. Tumblr’s “cool factor” and engergetic Tumblr CEO David Karp will likely give Yahoo an edge.

Another big thing Mayer has done? She’s pushed Yahoo harder than ever to revamp its applications for the web and mobile.

She oversaw the company while it made vital changes to Yahoo Mail, Yahoo News, the Yahoo homepage, and more. Cleaner mobile design has been prioritized, as you could see in the latest Yahoo Weather and Mail apps. 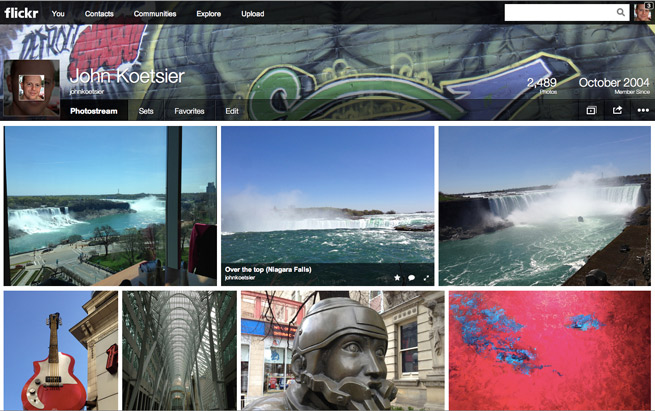 The biggest change, however, was to the photo-sharing and -hosting service Flickr. Yahoo boldly redesigned Flickr to be a modern-day photo service after letting it sit for years with hardly any changes. Changes included a cleaner user interface, high-resolution photos, and offering users 1TB of storage at no cost.

“We’ve made Flickr spectacular,” Mayer said during the unveiling of the new Flickr in New York City in May. “Photos make the world go around. Flickr was awesome once. It languished. But now it’s awesome again.”

Taking out the trash

Mayer has also shown a willingness to kill services to better focus the company on the products that matter.

Back in February, Mayer seemed so dedicated to the prospect of focusing that she wanted to ax the company’s mobile apps by 80 percent. Then she showed her resolve by killing off a slew of products in March, including Yahoo’s BlackBerry app, Yahoo Clues, Yahoo Avatars, Yahoo App Search, Yahoo Sports IQ, Yahoo Updates API, and Yahoo Message Boards.

Mayer remains serious. Just a few weeks ago, more shutdowns were announced. AltaVista, the once prominent search engine that Yahoo owned, was killed. It also shut down its browser plug-in Axis and the FoxyTunes music/media player.

No beatings necessary; morale has improved

Another thing Mayer has done right is keep employees engaged. She transitioned employees to free lunches. Her commitment to better-working and better-looking products have also encouraged employees.

One major controversial move Mayer made in regards to her employees was instituting a ban on working from home. Some employees weren’t happy, but the decision does show that Mayer wants employees collaborating, brainstorming, and working on projects face to face.

Even with the no-work-from-home policy, Mayer’s moves have mostly kept morale high. Glassdoor recently released a new survey of Yahoo’s employees that gave Mayer an 85 approval rating as CEO. Mayer had a 91 percent approval rating in the third quarter of 2012, but it’s easy to imagine 15 percent disagreeing with some of the many, many things Mayer has done in a year.

By comparison, Ross Levinsohn — Yahoo’s interim CEO before Mayer came in — had a 76 percent cumulative approval rating from Glassdoor. Scott Thompson had a 48 percent approval rating, and Carol Bartz had ratings of 42 percent and 54 percent during her time.

Now that Mayer has shown what she can do with a year’s time and some flexibility, she has to keep the momentum up. Yahoo still lags behind Google, Apple, Amazon, Facebook, and Microsoft when it comes to innovation.

It’s been a long time since Yahoo has been on the cusp of being a great tech company again. Getting back there is all on Mayer.