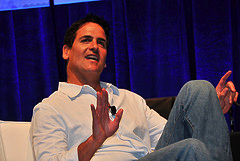 With all of the layoffs hitting the tech industry, everyone’s in need of a diversion — you know, a news story that is sure to stretch out into months of messy, fascinating, fully public detail. That story may have arrived this morning: Mark Cuban, entrepreneur-hero and outspoken Dallas Mavericks owner, is being taken to court by the Securities and Exchange Commission for “insider trading.”

[Update: Things may have gotten messier, faster than I expected they would. DealBook has obtained an email possibly sent from an S.E.C employee to Cuban in May of 2007, accusing him of being un-patriotic. Cuban had helped bankroll a movie called Loose Change that was highly critical of President George Bush. Excerpt:

If this upsets you, I wonder how George Bush feels. I assume that [S.E.C Chairman Christopher Cox] would view your involvement with “Loose Change” much as I do. After all, he served his country as a Republican Congressman from Orange County for nearly 20 years and was appointed by President Bush. If you feel like sharing my thoughts with Chairman Cox, be my guest.

Assuming the email is accurate, the S.E.C’s motives for the complaint appear less pure now than they did earlier today.]

The S.E.C. complaint alleges in June of 2004 search engine Mamma.com had given Cuban, an investor, confidential information about a pending stock offering. The complaint says the company had told Cuban that it planned to make the stock offering at a discount to the then-prevailing market price — a move that would dilute existing shareholders. Cuban then, the complaint says, sold his stock ahead of the offering and kept himself from losing more than $750,000:

Within hours of receiving this information, according to the complaint, Cuban called his broker and instructed him to sell Cuban’s entire position in the company. When the offering was publicly announced, Mamma.com’s stock price opened at $11.89, down $1.215 or 9.3 percent from the prior day’s closing price of $13.105. According to the complaint, Cuban avoided losses in excess of $750,000 by selling his stock prior to the public announcement of the offering.

Cuban has since fired back — obliquely, considering his usually outspoken style:

I wish I could say more, but I will have to leave it to this, and let the judicial process do its job.
November 17, 2008
RE: SEC Civil Action in the United States District

This matter, which has been pending before the Commission for nearly two years, has no merit and is a product of gross abuse of prosecutorial discretion. Mr. Cuban intends to contest the allegations and to demonstrate that the Commission’s claims are infected by the misconduct of the staff of its Enforcement Division. Mr. Cuban stated, “I am disappointed that the Commission chose to bring this case based upon its Enforcement staff’s win-at-any-cost ambitions. The staff’s process was result-oriented, facts be damned. The government’s claims are false and they will be proven to be so.”

[Photo of Mark Cuban at the TechCrunch50 conference, via J.D. Lasica.]