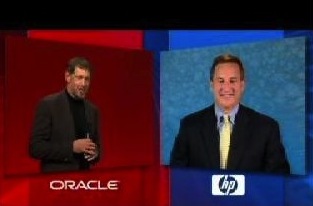 Oracle has a CEO, of course, in its founder, Larry Ellison. But Ellison has long hired operators like Ray Lane, now a partner at Kleiner Perkins, to run the business while he focuses on strategy, technology — and, oh, yes, sidelines like sailing and tennis.

Hurd happens to be Ellison’s tennis partner and friend, a relationship which led Ellison to defend Hurd and assail HP’s board of directors in an email to the New York Times earlier this week.

Historically, the companies have been close, with HP and Oracle launching joint hardware and software offerings. But all that changed since Oracle bought Sun Microsystems, vaulting it into the hardware business which is one of HP’s strongholds. Now Oracle and HP have broadly similar portfolios of servers, software, and consulting services.

What Oracle doesn’t have is top management with experience in hardware. And that’s where Hurd comes in.

At ZDNet, Larry Dignan suggests that Ellison was floating a trial balloon for Hurd’s hire. I think that may be a stretch: Ellison is a passionate guy and was more likely speaking from the heart about a friend. But that doesn’t mean the thought of hiring Hurd may not have crossed Ellison’s mind.

Where would Hurd’s ascension leave Oracle’s co-presidents, Charles Phillips and Safra Catz? Phillips, a former Morgan Stanley analyst, is the company’s deal maker and voice on Wall Street, while Catz is Ellison’s enforcer and inside operator. Arguably, if Ellison saw either as CEO material, they’d have the title by now. They might bristle at a new boss. But the acquisition of Sun, with the complexities it brings, is a strong argument for upgrading Oracle’s top management.

It doesn’t hurt that the bruises from Hurd’s departure, which he initially resisted before agreeing to resign at the request of HP’s board, are a fresh motivator for revenge. Oracle has long battled it out with IBM. Now it could take on HP, too — with a chief who knows the sprawling tech empire’s weak spots.