Following Facebook board member Marc Andreessen’s commentary on Internet.org and colonialism in India, Mark Zuckerberg has issued a statement distancing himself and Facebook from the investor.

I want to respond to Marc Andreessen’s comments about India yesterday. I found the comments deeply upsetting, and they do not represent the way Facebook or I think at all.

India has been personally important to me and Facebook. Early on in my thinking about our mission, I traveled to India and was inspired by the humanity, spirit and values of the people. It solidified my understanding that when all people have the power to share their experiences, the entire world will make progress.

Facebook stands for helping to connect people and giving them voice to shape their own future. But to shape the future we need to understand the past. As our community in India has grown, I’ve gained a deeper appreciation for the need to understand India’s history and culture. I’ve been inspired by how much progress India has made in building a strong nation and the largest democracy in the world, and I look forward to strengthening my connection to the country.

Denying world's poorest free partial Internet connectivity when today they have none, for ideological reasons, strikes me as morally wrong. 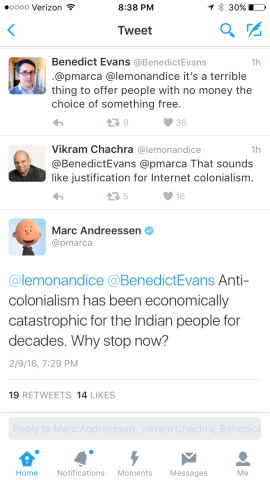 Zuckerberg has rightly distanced himself from Andreessen; the investor’s commentary not only compared Facebook’s Internet.org to colonialism, but even implied that this is, somehow, a good thing (later, he apologized, twice). However, Andreessen isn’t the first to make the comparison, and the undoubtedly profit-minded service has been rejected for violating Net Neutrality. As cracks form in Facebook’s Internet.org, perhaps the company will revise its strategy? We await such a walk-back eagerly.

Updated 2:51 p.m. PT with additional details and commentary on Internet.org.